*Updated with additional links to research 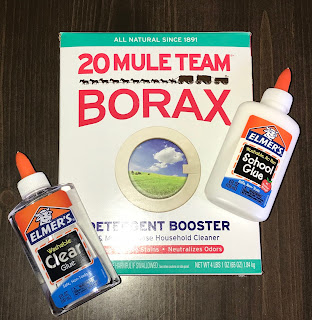 So I'm a little late getting into the slime game since I spent the last three years almost exclusively doing early literacy outreach, but in my new position I will be doing a school-age STEAM program once a month. I was looking ahead to October and trying to come up with "spooky science" activities, and a colleague suggested slime made with clear glue to be ghost ectoplasm, a la Ghostbusters:


So I began researching Slime recipes. Now people have been making Slime with the tried and true Borax recipe with white glue for YEARS with no apparent issues, but being aware of the recent concerns about safety due to a widely circulated story of a girl who allegedly got chemical burns on her hands from making Slime which were assumed to be from the Borax, I first tried a different recipe that uses contact solution and baking soda.

But the funny thing is, guess what the ingredients in the "saline" contact solution are that make it work?? Boric acid and sodium borate! So basically, it's the same thing, though already in a dilute solution. But it makes people feel safer, so I tried it first. The problem is, that this recipe requires a boost from the addition of baking soda (sodium bicarbonate) to raise the pH so the borate can bond with the glue, and I found that (1) the reaction with the baking soda produces lots of tiny bubbles, making the slime opaque rather than clear, and (2) even with playing around with the amounts of soda and/or contact solution I couldn't get the right consistency for a nice ectoplasm-like Slime.

So I said the heck with it, I'm going to try the original Borax recipe. And guess what, I got excellent results! The result was clear "ectoplasmic" slime that was only slightly sticky, and perfectly stretchy, gooey, and oozey (and stickiness could be eliminated by just a few drops more Borax solution, but it would be firmer and less stretchy). It was lovely! And it was still perfect the next day, whereas the contact solution/baking soda recipe became extremely firm, and dry and crumbly on the surface. 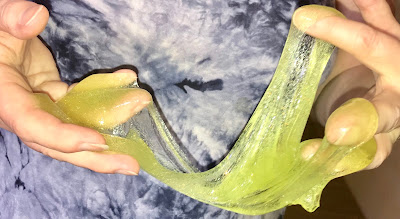 So then I started looking into the safety concerns. Having a scientific background and having worked with many laboratory chemicals in the past, I knew the place to look was NOT in news reports or social media, but the Material Safety Data Sheet (MSDS) that OSHA requires all chemicals to have. And guess what, as long as you don't eat, inhale, or get it in your eyes, there are really are no major safety concerns. The MSDS shows it has a hazard rating of 1, the same as baking soda or salt.

The powder does not cause irritation on intact skin (though washing and rinsing well after use are recommended), and gloves are only required for repeated or prolonged exposure. I also looked up the MSDS for Borax in solution, and at 1% it may cause mild skin irritation (again, handwashing after contact should prevent this), but the solution I used was only 0.88%, and the concentration in the final product is only about 0.4-0.5%, AND it is bonded to the polymer matrix, not free to react. So then I looked up the MSDS for the glue, and it also suggests washing hands after contact. (Incidentally, after spending 3 days in a row making and playing with slime, I have had no issues even though my skin tends to be somewhat sensitive.)

So what does all this mean?? Basically, if you use a little common sense, the traditional Borax recipe should be about as safe as the newer contact solution recipe, and neither are likely to cause any ill effects. That being said, I would not let kids handle the pure powder, but have an adult prepare the solution in advance, I would have everyone wash their hands well immediately after making or playing with Slime of any kind, I would not let kids make it frequently over a prolonged time, and I would not use it with younger children or anyone who is likely to put any of the materials or finished product in their mouths. Of course, this does not preclude the possibility that there could be individuals that have an atypical sensitivity to either the Borax or the glue, or could develop a sensitivity to either after prolonged or repeated exposure (as with anything else). 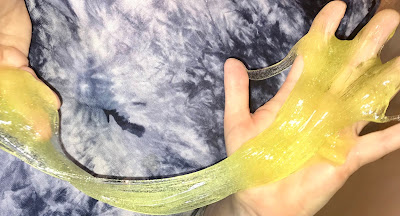 Now, what is my take on the original story that sparked the Borax hysteria?

I am certain there is more to the story than what has been reported. From my research, it seems extremely unlikely one could get burns like that from the traditional slime recipe, and frankly, I find the whole story slightly suspicious. She claimed to wear gloves with making the slime, and only using bare hands to play with the finished slime, where the borax is all bound up in the polymer matrix, not free to react. She had been making slime repeatedly for weeks with no irritation. And, the burns showed up while she was at a sleepover. So my theory is she was exposed to something else entirely that had nothing to do with the slime, or was using higher concentrations and/or additional ingredients and did not wash her hands.

So if you're more comfortable using a different recipe that is safe and works for you, by all means use it. But I do believe the Borax recipe can be used safely with supervision and common sense precautions I would use with any experiment, and may actually be safer than some of the alternative recipes I've seen. Of course this is only my educated but non-expert opinion and everyone must make their own informed decision, but it would seem two PhD-level chemists, one specializing in Boron chemistry, agree with me, and there are research studies to back it up.

Check out the following scientific articles and research papers that basically all say there is no risk in simply handling Borax or being around it (just don't eat it large quantities on a regular basis):

And here is what science educator and performer Stever Spangler has to say about it:


Please share your experiences and favorite Slime recipes in the comments!
Posted by Jen at 2:39:00 PM