Dramatic Play At The Library 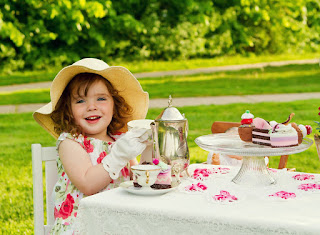 Does your library have a dramatic play area?

I will confess as a parent I never enjoyed "pretend play" with my kids; it just wasn't my thing. I was the parent who liked to joke around, wrestle, and horseplay with my kids, or take them to the park or zoo; I left all the tea parties and other pretend play to my husband.

But last year I transferred to new position at a library that fortunately has a large children's department with plenty of room for play and exploration, with a train table, several other tables with manipulatives and activities, and a dramatic play area, which I have assumed responsibility for. I initially set it up with a random assortment of play food and dishes, and I quickly became converted to a dramatic play believer after observing first-hand not only how much the kids enjoyed it, but all the developing skills dramatic play supports.

Dramatic play not only encourages creativity and imagination, but supports early literacy and language skills by giving children an opportunity to use expressive language, practice narrative skills, and see functional print. Dramatic play also supports socio-emotional development by encouraging caregiver-child interaction and social interaction among children. As children learn how to share, take turns, and play together, they are developing self-regulation and learning how to resolve conflict. Dramatic play provides an emotional outlet to allow children to work through difficult situations and fears in a safe environment. Children also use fine and gross motor skills in picking up and manipulating toys during the course of play.

And finally, a dramatic play area helps to create a sense of community by bringing families from diverse backgrounds together. I have seen so many friendships blossom in the span of one library visit between kids who didn't know each other prior, and as a result the parents get to know each other as well. I often hear them exchanging phone numbers and making plans for future play dates as they leave the library.

In order to keep the kids from getting bored with it, I have been setting up different themes for our dramatic play area and rotating play items in and out, and having a lot of fun with it! Since these require a fairly significant amount of planning and work to do; I only change them up every 2-3 months. I just love hearing the kids and parents playing together! The kids have really been enjoying it, and the interactions I observe are really wonderful. If you can carve out the space for one, I highly recommend having a dramatic play area in your children's department.

Here are some of the different themes and set ups I have done so far (pardon the picture quality; I usually set these up on the night that I work when it is very slow, and it is rather dim in that area without sunlight coming in the window). Click on any image to enlarge: 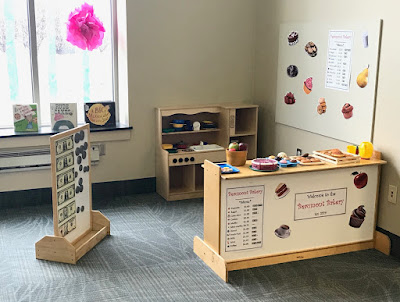 For this one I pulled just the baked goods out of our assortment of play food: cake, croissant, baguette, rolls, cookies, donuts, bagels, cupcakes, and brownie; as well as a few assorted fresh fruits to have healthier options, and the milk and juice. I pulled assorted trays for displaying the baked goods; a few of the bowls, pots, measuring cups, and pans for baking; plates, utensils, and cups for serving; and the teapot, sugar bowl, and cream pitcher. We later got a play Keurig-type coffee set and added it (so cute!).

I made a sign and a menu with prices, adding pictures of the items and money since many who would be using the area are not reading yet. I put our large pieces of magnetic play money on the magnet board, and added a few large pictures of items to fill the rest of the space on the bulletin board. Finally, I pulled picture books (fiction and non-fiction) having to do with baking, bakers, cookies, cakes, cupcakes, brownies, donuts, etc. and placed along the window sill. I kept this display of related books up for the first week or two.


[Whoops! Forgot to take any pictures of this one! It was already the beginning of summer reading and I was scrambling to get everything done, while working the busy service desk.] 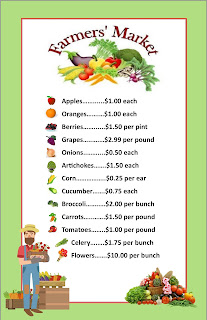 I once again sorted through our play food to pull out all the whole fruits and vegetables, with play bushel baskets and bowls to put them in. We had a pretty good variety: tomatoes, onions, peppers, corn, carrots, broccoli, mushrooms, lettuce, celery, strawberries, blackberries, assorted apples, oranges, pears, and probably some I'm forgetting. I also included a few bunches of artificial flowers, but the kids were really rough on them and they were pretty much destroyed by the end of the month.

I printed out a price list and found we had a play register with felt money that I put out. I also printed out a list of suggested activities to encourage caregiver-child interaction (sorting food by color, by fruit or vegetable, or by whether it grows above or below ground; gather ingredients for a recipe, pretend to buy & sell...) and also put up a couple of posters about healthy eating. Then I pulled both fiction and non-fiction books about gardening, farming, and farmer's markets to put along the window sill. 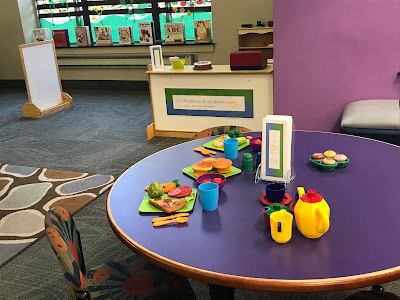 I started working on this one well in advance, beginning with the menu. I found an old file on the computer from a previous dramatic play set up years ago with a menu based on book titles, so it served as a bibliography as well, which I loved! 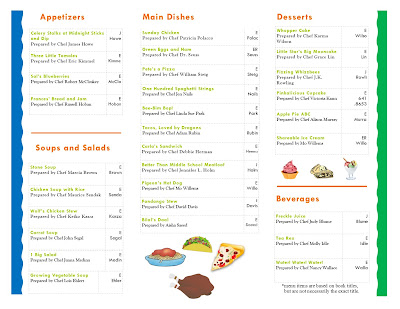 Of course, after 10+ years we no longer had most of the titles, so I basically had to re-write the whole thing, and changed the color scheme and graphics, then made a coordinating sign. 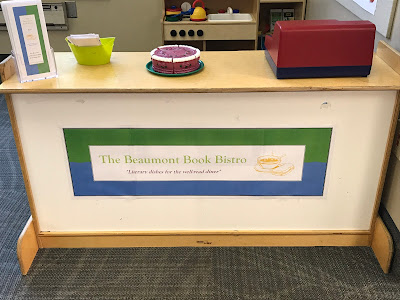 Once I had the menu set, I pulled all the related play food, serving dishes, pots and pans,  and cooking utensils to put in the kitchen. I laminated several menus to put on display at the counter, as well as printing a large one for the bulletin board. Our felt money was pretty gross and well-worn by then, so I found some paper play money which I laminated to replace it with, and put out some scrap paper and pencils for taking orders. On the bulletin board I added a sheet with suggested activities, a smaller version of the sign, and a couple of posters about healthy food choices, and I placed several of the books mentioned on the menu in the window. 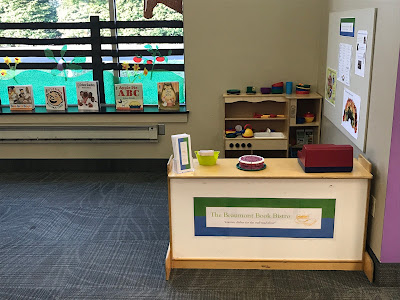 Finally, I couldn't resist staging a table for two with plated meals matching items on the menu, complete with healthy sides, coffee, and dessert. Can you guess the books represented? 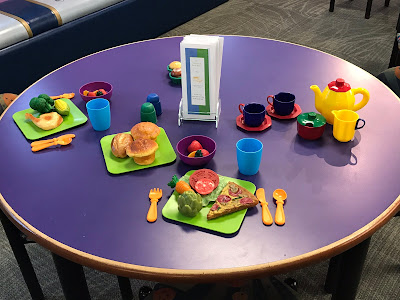 I really enjoyed listening to the kids playing with this set up, listening to them take or place orders; playing waitstaff, chef, or customer (I did notice most often the adult caregiver was the customer); hearing some of the prices they would charge and new items they would add to the menu. I saw one girl expertly balancing two trays of food to bring to the table, just like a professional. I heard so many great interactions between caregivers and children, and among the children, with such imagination. I was a little sad to take this one down, but after almost 3 months it was time, and I had a great idea for the next one! 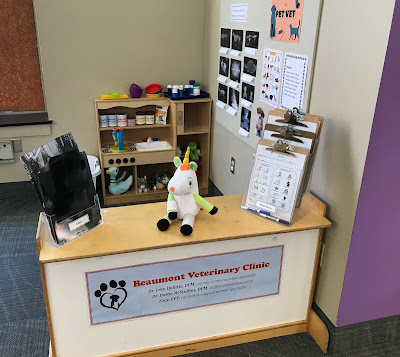 I really got into setting this one up! It took quite a while to prepare everything, so I wasn't able to get it set up on my Thursday night as usual (when it is really slow) and had to do it on Friday afternoon. Unfortunately, I didn't manage to get it done before the after-school crowd hit, so I had a hoard of impatient children crowding around me as I was scrambling as fast as I could to get it all set up and snap a few pics before turning them loose. Next time that I can't get it all done on Thursday night, I will just wait another week! 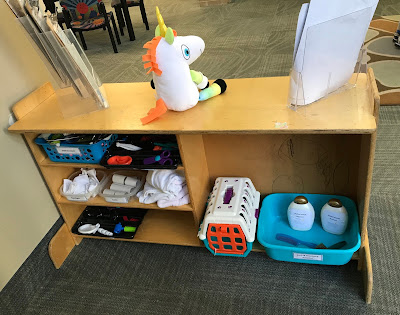 The items I stocked the clinic with were: 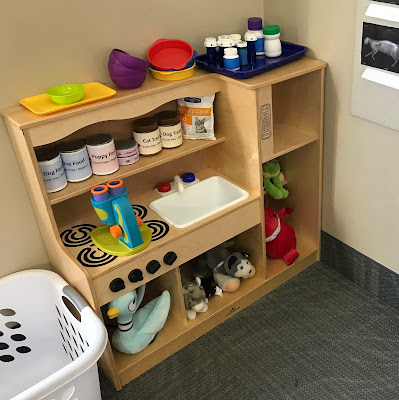 The cabinets and other spaces in the kitchen served as cages for the animals, and I later added a label to change the microwave in the play kitchen to an autoclave for sterilizing the medical instruments. The clinic sign named Dr. John Dolittle [probably showing my age here!] and Dr. Dottie McStuffins as the veterinarians, and Zoey (of Zoey and Sassafras) as the vet tech. On the bulletin board I posted the clinic hours (same as the library's), miscellaneous pictures and posters, and several pictures of animal x-rays for them to guess the animal. 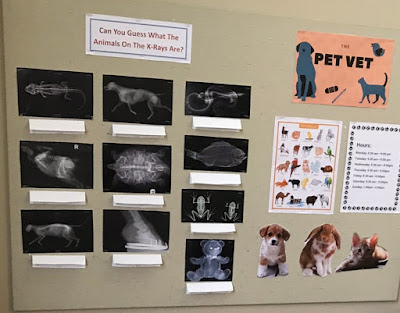 Finally, I quickly pulled a selection of books about veterinarians and pet care to put in the window, and turned them loose! 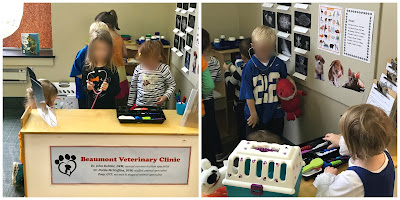 And of course soon after it looked like the clinic had been hit by a tornado! I also discovered two little girls that had absconded with almost a third of the stuff and used cushions to barricade themselves inside the reading nook on the other side of the children's department so they wouldn't have to share, LOL! I have noticed a little more arguing and fussing with this set-up, particularly over the carrier. I'll take that as a sign that that's how much they like it??

After a week, I unfortunately had to take away the markers for recording on the patient charts as I found that kids were scribbling all over everything with them, requiring replacement of everything on the bulletin board, and cleaning the walls and fixtures. Some ideas that work so well in a structured and well-supervised classroom of 4-year olds don't work so well in an less structured library environment with mixed ages that aren't always supervised as well as they should be, unfortunately.

I have seen other much more elaborate dramatic play set-ups, but considering that I'm only part-time and have to do all this while I'm on the desk (I get no time off the desk for planning and projects), I'm really pleased and rather proud of the set-ups I've come up with. Mixing it up keeps the kids from getting bored with it, and gives us time to replace lost, damaged, or worn out items. I just love listening to the kids play back there!

Now, on to planning the next theme...

Do you have a dramatic play center? Tell me about it!

Email ThisBlogThis!Share to TwitterShare to FacebookShare to Pinterest
Labels: Dramatic Play, Other Programs