Now that I am done with library school, finished with job hunting, and have a general idea of what I what direction I want to go in with programming for now, I am working on trying to catch up on the new books that have come out this year that I've missed. Yesterday I looked through all the newer picture books my branch had gotten in the last 6 months that were on the shelf (though some may have been published earlier), and there were a few that really stood out: 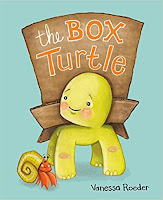 This is a cute story about being different, learning to be comfortable in your own skin, and appreciating what makes you special. Torrence is a young box turtle who was born without a shell, so his parents help fashion one out of, what else, a box. It fits perfectly, does the job, and at first Torrence is happy with it, until the other turtles start making fun of him.

A cute story with a positive message and appealing illustrations, including gratuitous pics of a cute little turtle tushie ;). 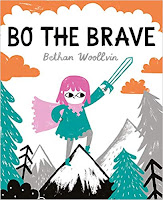 Bo's brothers are fierce knights who hunt monsters, but tell Bo she is too little to go with them. But wanting to prove her brothers wrong, Bo sets out on a monster quest of her own to show how brave she is. She encounters a gryffin, the Kraken, and a dragon, but discovers they are not horrible monsters after all, just misjudged and misunderstood by humans. Can she help rescue the baby dragon her brothers have captured and return it to its mother?

A great story about showing compassion, not making snap judgments or fearing others just because they are different. The illustrations remind me a little of Zacharia Ohora's work. 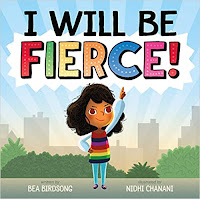 A strong message about being yourself, having courage, being confident, being adventurous, expressing yourself, and being the hero of your own story.

I LOVE, LOVE, LOVE this book and the strong, positive, empowering message it sends to young girls, and all children. Highly recommend! 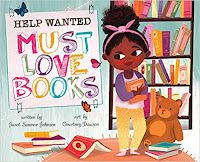 Shailey loves stories, especially when her dad reads them to her. But when her dad's new job starts taking all his time, attention, and energy, Shailey announces he is fired as her bedtime story reader and places an ad to find a new one. But the candidate pool proves to be less than impressive, forcing Shailey to add new requirements to her posting. Finally, the perfect candidate applies, and there is something very familiar about him....

A story that is mostly funny and entertaining, but also sends a not-so-subtle message to adults about work-life balance, putting the phone down, and spending time reading with your kids. The personal statements from some of the applicants included at the end are a nice touch.

The Button Book by Sally Nicholls & Bethan Woollvin. January, 2020.
This is a must-have interactive storytime book! I haven't seen a picture book I was excited about as a storytime book in quite a while, so I was really happy to discover this one. Throughout the book, the characters encounter buttons of various shapes and colors. Here's a button; I wonder what it does? Should we press it?
Highly recommend! 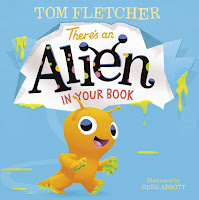 There's an Alien in Your Book! by Tom Fletcher & Greg Abbott. June, 2020
This is another awesome interactive storytime book, and better yet, it is part of a series. In this one, an alien has crash-landed on earth and the audience must jiggle, bounce, turn, and more in order to launch him back into space. The illustrations are absolutely adorable, and it makes such a fun group read-aloud.
This series also has books with a dragon, a monster, and an elf, with a witch book and superhero book due out in 2021. I highly recommend this whole series. 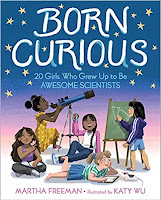 Born Curious: 20 Girls Who Grew Up to Be Awesome Scientists by Martha Freeman & Katy Wu. February, 2020.
Okay, so this one really doesn't qualify as a picture book, it is very text heavy with only a few illustration and has an older target audience, but I liked it so much I had to include it.
This is a collective biography of twenty different women scientists to inspire young girls and show them that STEM is for women, too. I love the cover art with it's modern style, portraying some of the subjects as children, which makes it much more relatable and attractive to the target audience. Also, it shows great diversity. There is an afterword that talks about how to become a scientist, a glossary of terms, and index, and references at the end. Highly recommend!
I know I still have a lot of catching up to do, and it seems my library system doesn't get items until they've been out for a few months, so if you know of some other great books out the last few months, especially good storytime books, please tell me about them in the comments. I'm hoping to start virtual storytimes next month, so I'm looking for some great new books to wow them with!
Posted by Jen at 12:20:00 PM