Lately I've been looking to various lists of holidays and observances for inspiration for my storytime themes, and the first full week of April was "Be Kind to Spiders Week". Since so many people have somewhat irrational fears of spiders as adults, I thought maybe this would be a good opportunity to provide some factual information and a more positive spin on spiders.

After our "Hello Song" I brought out our tarantula spider puppet I named Aragog to help me introduce the storytime, along with a non-fiction book about spiders. I talked about how most spiders are harmless to people, and they help us by catching some of the bugs that can harm or annoy us like mosquitoes and flies. I showed pictures of the only two species found in the U.S. that are harmful, the black widow spider and the brown recluse, and talked a little about the spider's anatomy. I also mentioned that it's okay not to want spiders in your house and have a grown-up humanely relocate them outside, but we should just let them be when they are outside where they belong.

After a lead-in song I read the first book, the classic Little Miss Spider by David Kirk. This story is short and sweet, and Little Miss Spider is so adorably cute I don't see how anyone could be scared of her. This book was originally published 28 years ago, and was perhaps ahead of it's time in showing a non-traditional family, and that parents are the ones who love you most and care for you and don't necessarily look like you. I will have to remember this one the next time a patron is asking for adoption stories.

The itsy-bitsy spider climbed up the water spout.

Down came the rain and washed the spider out.

Out came the sun and dried up all the rain,

And the itsy-bitsy spider climbed up the spout again.

Then I read another classic, Eric Carle's The Very Busy Spider. I really like this one because it includes lots of farm animals that you can ask the kids to identify and/or sound like, since making animal sounds in great for phonological awareness, and it's fun! In the story we see the quiet spider building a new web a little at a time as the other animals stop by one by one to ask her to play. But she is too busy building her web to play. 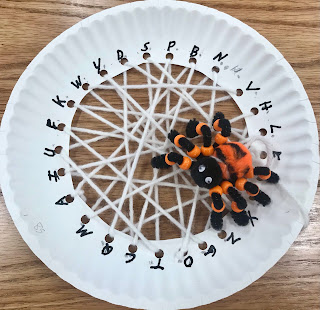 How It Went
It went pretty well as far as I could tell, but as usual there was no live interaction during the broadcast, nor any comments later. There were a decent number of views I suppose, but I just really doubt kids are watching and engaging. With my moving to this area and library six months into the pandemic, I had no pre-existing relationships or audience to draw on, and I know it's just incredibly difficult for young kids to engage in this format. But I did have a cool background, though it was at the expense of some of the illustrations in the first book.
Posted by Jen at 11:05:00 AM