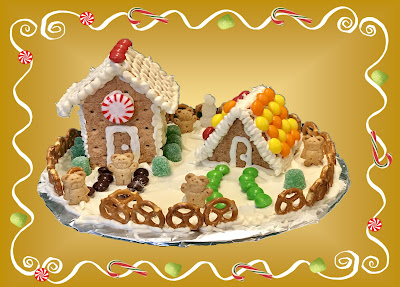 Back in 2019 I had the opportunity to do something I'd always wanted to do - a mini 'gingerbread' house program inspired by the graham cracker 'gingerbread' houses I used to make with my daughter. I eschewed what apparently has become common practice of pre-assembling the houses or using cartons/boxes to build them on in favor of an open-ended STEAM approach, allowing kids to fully express their creativity and empowering them to use their engineering and problem-solving skills. It turned out to be a huge success, and I was really looking forward to making it an annual program.

But we all know what happened next: the pandemic hit, libraries shut down, then re-opened without in-person programming for the remainder of 2020 and much of 2021. During that time I changed libraries twice; first due to pandemic lay-offs, then to find a better fit. So by the time the pandemic had eased up enough to allow in-person programs and for me to be comfortable with anything food-based, I found myself in a library and community much different from the one were I did my first gingerbread house program. I have observed that people here and now seem to have a harder time following instructions and figuring things out, so I wasn't comfortable with diving in with a huge program like I did before. I decided to quietly do a small-scale program for one specific age group as a test run this year, and see how it went.

Most of the kids who had attended previously were in the 5-10 age range, which was perfect since I have a regular monthly program for that age I call "Kids Club", with different activities each month. I hinted at what we would be doing with terms like "holiday building challenge" and "confectionary architecture" in the description, but did not come right out and say gingerbread houses, nor did I include any images other than our generic "Kids Club" logo. I knew if I included images and publicized it, I would be overrun with people of all ages. I did everything pretty much the same as previously. 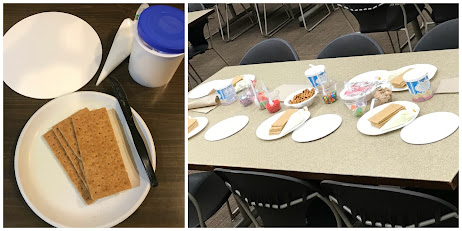 Materials & Supplies:
Prep:
Program:
How It Went:
I ended up with a total of 12 kids from ages 5-10, plus adults, which was the perfect size for a good test-run, and though I was a little nervous, it went just as well as at my previous library before the pandemic. This just further proves that kids do NOT need to have everything done for them, they have a much better experience when allowed to do and figure things out for themselves, and this approach allows for much more creativity, as seen below. No two houses looked at all alike.

Some of the younger kids needed some assistance from their grown-ups, but not too much, and I saw no signs of frustration at all, just happy faces proud of their creations. They may not have been the most perfect, sturdy, nicely decorated houses, but that's okay. In fact, it's more than okay, because it shows that they did them themselves, and were empowered to figure things out and be creative, giving them a much greater sense of accomplishment than a perfect, preassembled house that looks pretty much like everyone else's.

I'll also add that my co-worker who does the teen programming had coincidentally decided to do this same program with the teens, so I helped a little with that one as well, and the younger kids definitely took it more seriously and had better results. The teens, all middle-schoolers, just wanted to eat a pile of crackers, icing, and candy. But they still had fun!

Since it went so well, I think I'll try a big, family program mini-gingerbread house in December and a haunted gingerbread house program for the teens in October next year.
*A note about icing/frosting - Though royal icing (made with powdered sugar and fresh or powdered egg whites) is the traditional icing used to glue a gingerbread house together and decorate, it is difficult to work with, especially for kids/beginners. It is tricky to get the right consistency, and is actually pretty weak at holding parts together until it is dry. But it will last for a very, very long time without discoloring. If you are doing a fancy gingerbread house that will takes weeks to finish and be on display for a long time, then you would want to use royal.
But if you are doing a fun, simple project like this with kids that will be completed in a day and possibly actually eaten, canned icing or a version of American 'Buttercream' (made with powdered sugar, shortening, and a little powdered egg white added) works much better because it has a thick consistency that will hold the crackers in place easily if a thick enough base layer is used. This icing will discolor eventually, but will easily last for a month or two. My original examples (pictured at the very top) held up for a year or more before being discarded due to dust and discoloration.
Posted by Jen at 5:43:00 PM