We were still having summer weather when autumn officially started; luckily, by the time I started my "Fall" rotation on the Storytime Bus the following week we had some nice crisp fall weather. I saw around 28 classes, doing 2 or 3 books and 1 or 2 activities for each, following our introduction, letter-of-the-day ("Ff"), and story song.

With so many squirrels in our stories, it was only fitting to greet the kids with our adorable squirrel puppet, and bring it out for our "Five Little Acorns" rhyme. First I showed the kids some real acorns, pointing out the round nut and the cap.

Five little acorns, laying on the ground.
(hold up 5 fingers, gesture to ground)

The first one said, "I'm nice and round."
(hold up 1 finger, then hold arms out in front)

The second one said, "I think I'm getting fat."
(hold up 2 fingers, hold arms out to sides)

The fourth one said, "There's a squirrel up there!"
(hold up 4 fingers, point up)

Then down came the squirrel and took them all away,
(make climbing motions down, scoop up acorns)

Back up to his nest, for a cold winter's day!
(making climbing motions up)

When we needed more movement, or an additional activity, we pretended to be scarecrows with this song:

"Scarecrow, Scarecrow"
(to the tune of "Twinkle, Twinkle, Little Star")

I like how this ends with them sitting down, ready for the next story; after first checking for crows and complimenting them on being such good scarecrows. 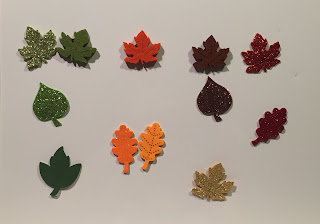 Sorting activities are great as they work on so many skills: identifying colors, shapes, attributes; analytical reasoning (pre-math and science skill), and expressive language. I had a large assortment of foam leaves, some of which are pictured above. There were green, orange, brown, red, and gold leaves. There were maple, oak, and aspen leaves. Some leaves were plain, and some were sparkly.

I would give each child one or two leaves, then place a few different ones on the board for a starting point. I first called the teacher to model how to make observations and reason out where their leaves belonged, then called each child up one at a time to put their leaves up where they thought they belonged. I would try to get them to explain their choices, but if they were too shy I would ask them yes or no questions about it, that they could answer by just nodding or shaking their heads.

We had a lot of fun talking about all the changes of fall. Fall Is Not Easy was the biggest hit, as always, and my personal favorite. When The Leaf Blew In was also a great book with all ages, with the chain reaction of events and all the animals to name. The Busy Little Squirrel worked well with all ages, and was perfect for the younger kids, along with Mouse's First Fall. I used Oliver Finds His Way to show kids that if they get lost they should just stay where they are and wait for a trusted adult to find them, rather than running around and getting even more lost.

We had a lot of fun with the rhymes and song, and the leaf-sorting activity worked well with the older kids. I think it needs to be simplified a little with the younger kids, so there are not so many different characteristics to consider. Several were too shy to explain their reasoning, or too unsure, but most would at least identify the color. The squirrel puppet was a huge hit with everyone!
Posted by Jen at 9:49:00 PM