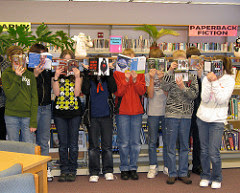 Last week I helped the school librarian with the book club at the local middle school. Her goal is to get as many kids involved as possible, not just the avid readers. So she chooses 5 books each year, of various genres and with a range of reading levels, and recruits volunteers to help lead discussion groups. Each month a different group of kids participate, with about 12 assigned to each group, then we meet in the library and break into discussion groups for each book, lead by adult volunteers (most of us work at public libraries).

The books for this year are Do You Know The Monkey Man? by Dori Hillestand Butler, Heat by Mike Lupica, Among the Hidden by Margaret Peterson Haddix, The Ghost of Graylock by Dan Poblocki, The Ruins of Gorlan by John Flanagan. 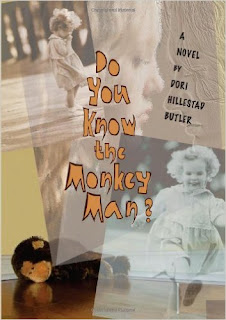 This month I led the discussion of Do You Know The Monkey Man? by Dori Hillestand Butler (2005). This is a good high-interest, lower reading level book that, at only 193 pages, will appeal to both reluctant readers and those who like something they can finish in one sitting.

For as long as 13-year old Sam can remember, it's just been her and her mother. A long time ago they were once a family of four, but her parents divorced following her twin sister Sarah's tragic death, and her father disappeared from her life. But now her mother is getting re-married, and wants her fiance, Bob, to adopt Sam, which brings up old memories and confusing feelings.

Sam likes Bob, and wants her mom to be happy, but she doesn't want him to adopt her when she already has a father, somewhere. She decides to try to find and contact her father, with the help of her friend Coral. But things don't go quite the way she expected, and she begins to have doubts about the story surrounding Sarah's death. She continues to investigate, and when she finally confronts her father, what she finds will turn all their lives upside down.

This book is part self-discovery, part mystery, and part family drama, and is sure to capture the reader's attention.

Discussion Questions
I looked over some prepared questions in advance, but I just let the discussion progress naturally and let the kids lead as much as possible, proposing new questions when the discussion slowed. Some of the questions/topics we discussed, though not necessarily in order, were:

1. Do you think Sam should have told her mother she wanted to try to find her father first?[All said she should, even though most thought her mother would probably say "No"]

2. How would you go about finding a long lost friend or relative?
[Ask friends or relatives, social media, internet, private investigator...]

3. Would you consult a psychic like Sam did?
[Some yes, some no, some maybe] Do you think psychics are real or fake? [Some said yes, some said no, some said not sure, and some said that most are fake but some may be real.]

4. Do you think twins have a special connection?  [Maybe, probably] If so, were you surprised that Sam never felt that Sarah might be alive before now?  [Mixed answers]

5. Would you be willing to help your best friend like Coral and Angela helped Sam?
[All emphatically said "yes", and this led to a discussion of how Angela should have been more supportive, and how her experiences with her father affected how she saw Sam's situation.]

6. Do you think Joe should have gone to jail?
[First most said no, then all agreed that he *deserved* to go to jail, but that it was better for T.J. that he didn't, and that was more important.]

7. Do you think Sam and T.J. will be able to forgive Joe? Could you?
[Mixed answers, very unsure]

8. Do you think Sam's mom will ever be able to forgive Joe for taking Sarah and letting her think she was dead all this time? Why or why not?
[Most said she probably wouldn't, but would try to pretend to for T. J.'s sake.]

9. Why do you think Sam didn't want Bob to adopt her? How do you think you would feel in a similar situation? Do you think she may change her mind now that she's found her father and learned what he did and what he's like?
[Most understood that Sam felt like she already had a father, and most commented to the effect that she could still like him and have a close relationship without him adopting her. Several thought she might change her mind now that she knows what kind of a father Joe is.]

10. Do you think T.J. and Sam will ever be close, and really be like sisters? Will she and Suzanne be able to have a mother-daughter relationship?
[Yes, but it won't be easy and will take time.]

11. Would you want to read the sequel?  [Several already had]  Would these books make a good movie?  [Yes! They all said they would love to see a movie version, a couple said they wanted to e-mail the author and ask her to have it made into a movie and/or write a third book.]

How It Went
I had about 10 girls, and most were very enthusiastic about the book, and some had even already read the sequel, Yes, I Know The Monkey Man, which continues the story from T.J.'s perspective. About four of them weren't even supposed to participate until next month, but they had already read the book and couldn't wait to discuss it. We had a pretty lively discussion, with all of the kids contributing, though there were 2 or 3 who were on the quieter side and did not say as much.

They all talked about how much they loved the book, and the ones that had not read the sequel already said they really wanted to. One girl happened to spot it on the shelf nearby and jumped up and grabbed it so she could check it out that day. She was one of the two girls who reported that they normally didn't read much, but that they read this book from start to finish in one day. We had a great discussion, and the several of the kids mentioned how much they enjoyed it, and one even gave me a hug, which I expect from the preschoolers, but not middle schoolers.

I had not heard of this book before, and the library I work at doesn't even have it, but I would highly recommend it for this age and found it a great choice for a class read or book club as it appeals to all readers, even reluctant ones. I personally enjoyed it as well, though did not find the sequel to be quite as good as the first one. From the title and the cover, I had expected it to be more creepy and sinister, but it isn't at all.
Posted by Jen at 2:26:00 PM

Email ThisBlogThis!Share to TwitterShare to FacebookShare to Pinterest
Labels: Other Programs, Tween Programs