What to do on the Storytime Bus during the transition between Thanksgiving and Christmas? It isn't really winter yet, and we don't typically get much snow until January or February around here, so I usually save those themes until after the holidays. I decided to do "Food" since food does play a big part in the traditions of both holidays, and everyone has to eat, right?

We visited multiple facilities and saw many groups, for roughly 30 minutes each. We started each session with an introduction including the letter-of-the-day (Ff) and our "story song", followed by reading 2-3 books and doing a couple of other songs or activities, depending on time, with several of each to choose from.

How Do Dinosaurs Eat Their Food? by Jane Yolen & Mark Teague, kids love this series!
The Very Hungry Caterpillar by Eric Carle, a beloved classic, great artwork
Keisha Cane and her Very Sweet Tooth by Ashley Foxx & April Foxx, very cute
What's for Dinner? by Ann Garrett & Gene-Michael Higney; bold, simple illustrations, flaps
Yummy Yucky by Leslie Patricelli, written to teach babies and toddlers what should
not go in their mouth, but the older kids love it, too.
Everybody Loves Bacon by Kelly Dipucchio & Eric Wight, silly with lots of puns
The Watermelon Seed by Greg Pizzoli, humorous, short & simple
Worms for Lunch? by Leonid Gore, lift a flap, guess what animals eat
Is That Wise, Pig? by Jan Thomas, funny, counting, bold, simple illustrations 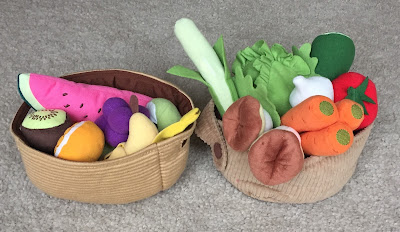 I had this nice set of plush fruits and vegetables that we would hold up and see if the kids could name them. They had no problem with the fruit, but the green onion, garlic, and what could be either a poblano pepper or okra game them trouble. We talked about the ones we liked and didn't like, and how they were good for you. Sometime I used them with the song below, following a reading of Is That Wise, Pig? I would hold an item up and let the kids name them to put in the soup; other times I just let the kids taking turns saying what they would like to add to the soup.

Stir, Stir, Stir the Soup
(to the tune of "Row, Row, Row Your Boat)

(repeat for as many verses/ingredients as desired, act out motions)

I also had a song that went with The Watermelon Seed perfectly, that helps to explain why you don't have to worry about a watermelon growing in your belly if you swallow a seed and provides the opportunity for a quick discussion about what seeds need to grow.

A Watermelon Seed
(to the tune of "London Bridges", call and response)

The last activity provided an opportunity to discuss picky eaters, and why you should always try a bite of everything before you decide whether you like it or not. 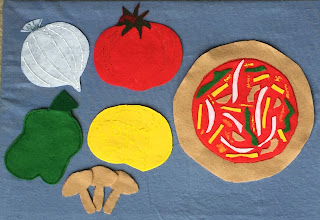 There was an actual script for this, but I just winged it, telling the story with the felt pieces and acting our the motions.. This flannel set tells the story of Picky Paul, a little boy who didn't think he liked anything. One day his father was getting ready to cook dinner. He set the ingredients out one by one on the counter (let kids identify each), and each time Picky Paul would say, "I don't like ____". Then, Picky Paul's father got out a bowl and added some flour, yeast, water, olive oil, and a pinch of salt. He mixed them up (pretend to stir), then rolled it out (pretend to roll). Next he chops or slices each ingredient and sprinkles them on (imitate chopping/slicing and sprinkling). Then he puts the whole thing into the oven.

As it cooks, a wonderful aroma fills the air. Picky Paul sniffs, and comments on how good it smells. Finally the timer dings, and Picky Paul's father takes it out of the oven. "Pizza!" exclaims Picky Paul, "I LOVE pizza!" So even though Paul thought he didn't like the items individually, he loved them all together on a pizza! Then we discussed each of our favorite pizza toppings.

I used this song when we needed just a little movement, replacing the English "jelly" and "biscuits" with the American "Jello" and "Cookies".

How It Went
The kids loved talking about what their favorite (and least favorite) foods were. Even though Yummy, Yucky is written for toddlers, they all loved saying whether each item was "Yummy!" or "Yucky!". Worms for Lunch? was also a hit, and I had fun introducing it by saying it was about what they were having for lunch. A few clever kids did think of saying they would eat worms for lunch; gummy worms, that is! Jan Thomas' new book was a huge hit as expected, and Jane Yolen's dinosaur series is always well received.

Keisha Cane is a great book, and surprisingly self-published; unfortunately there are no more copies being made. The Very Hungry Caterpillar is of course a beloved classic, though there were more than I expected that didn't seem familiar with it. One little boy commented very enthusiastically about how much he liked the colorful collages on the endpapers and preliminary pages. Everybody Loves Bacon didn't fare as well as I would have liked; I think it needs an older audience to understand and appreciate the humor.

The kids were very interested in looking at the plush fruits and veggies, and did a good job of naming most of them. They had a lot of fun with the soup song, and we had some *very* creative ingredients in our soup! One boy complained we were making him hungry with all the talk about food 😄

One thing I would add, and I didn't really realize I had overlooked, is a couple of books/activities about pies and cookies to indirectly tie in with the holidays a little more.
Posted by Jen at 5:06:00 PM

10 Things You Should Not Be Afraid To Do In Storytime This is a somewhat random compilation of things, in no particular order, I hav...