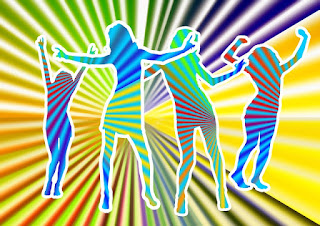 So, I think I jinxed myself last week by planning a "Germs" storytime 😡. Just a couple of days before that I ended up coming down with what I thought was just a cold, but on Friday I was really hoarse, and by Saturday I had lost my voice completely! When I was not really any better on Sunday, and had 6 back-to-back storytimes scheduled for Monday morning (with another 4 on Tuesday and 6 more on Wednesday), I knew I was in big trouble!

Most of the time I have a volunteer to help me with storytime, but as luck would have it, I had NO ONE sign up for December; everyone was too busy with the holidays I guess. I sent out an e-mail practically begging for someone to find the time to help, with no response, and I knew my boss would have a meeting and the one of the children's librarians was on maternity leave, so they were already spread too thin. I really didn't want to cancel because it was our last rotation before taking a two week break over the holidays, and we had planned a holiday theme and made packets of "reindeer food" to give to all the kids (for my thoughts on the whole holiday controversy please see my previous posts "And Here We Go Again" and "To Holiday Or Not To Holiday").

So, what do you do if you have a scheduled storytime but you have no voice? Turn it into an impromptu "Preschool Dance Party"! I already had Laurie Berkner's Christmas CD, and I quickly downloaded a few more songs to my phone as well after getting the OK from my boss to change the format and sending an e-mail to give the preschool a heads-up. I only needed enough songs til fill about 20 minutes, and I tried to choose ones that (1) the kids would know, and/or (2) had a fast tempo and good beat to dance to. Here's a list of songs that I ended up using:

I also offered movement scarves and/or ribbons with the songs that didn't have motions or bells. I also hoped that my voice would come back enough to at least be able to read 1 story to each class, but I wasn't very optimistic.

How It Went
I won't sugar-coat it; the first day was pretty rough. I still had almost no voice, just barely enough to explain why we weren't having a regular storytime, and singing was impossible. I did manage to read 1 short book (Mouse's First Christmas) to three of the classes before my voice gave out completely. In one class the teacher read a couple of books from my selection, and the other two just did music. It went okay, except for whatever reason, the kids at this facility just never seem to get into the music as much, and only a few would dance. I managed to coax a couple of reluctant participants by pulling them up front to dance with me.

The second day was a little better (and mercifully shorter); I still only read 1 book to each class, but my voice was slightly better. These kids really got into the music and dancing, so it was a lot of fun. Then today I managed to make it almost like our usual storytime, and was able to read two books, or do 1 book and 1 flannel activity, to each class, then finished up with 2 or 3 songs. Some of the classes got into dancing, some just wanted to sit and listen/sing along, and one class got SO into it, we decided it was best to sit after the first song 😉.

The kids really liked "Rudolph" and "Frosty the Snowman", which I expected as they were the most familiar, and of course loved doing "Jingle Bells" with actual bells. Some recognized "Rockin' Around The Christmas Tree" from the movie "Home Alone" and a few knew "Santa Claus Is Coming To Town". One word of caution, "Let It Go" (the song from "Frozen") did NOT get a good reception, much to my surprise! I guess the kids are finally as sick of it as everyone else. When it started playing, I immediately heard several choruses of "Awwww", "Not 'Frozen'", and "I hate this song!"; I didn't dare to try it again after that as I had plenty of others.

While not ideal, I think everything went okay, and no one seemed to mind the change in format. We did end on a positive note, though, when one of the classes today gave me a Thanksgiving Day card that they had not been able to give me before Thanksgiving, full of handprint turkeys made by each of the kids, and a little Christmas notepad. Things like that just make my day! 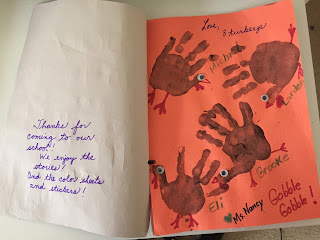