Many of our winter-themed picture books in my kit for the Storytime-To-Go program have to do with animals, particularly bears, hibernating. I didn't really feel like talking about winter again, so I decided to do a general "Bear" storytime. We started with our welcome song, and then talked a little about bears and how they would be sleeping, or hibernating, now that it's winter, after eating and getting fat during the fall. We followed that up with a version of the classic "Teddy Bear, Teddy Bear" rhyme: 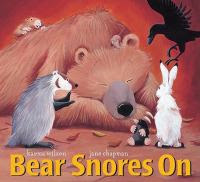 After singing our "story song", we read our first book, Bear Snores On by Karma Wilson and Jane Chapman. I love all books illustrated by Jane Chapman, but especially Karma Wilson's Bear books. This one is particularly fun for the kids because in addition to saying the repeated line "But the bear snores on," they get to make snoring sounds. I also like the drama when the bear wakes up and at first seems angry that the other animals are in his cave, but he's really just upset that he missed out on all the fun. For 3-year olds, that's a pretty significant plot twist.

After that we sang my version of a childhood classic, "The Bear Went Over The Mountain":

The bear swam across the river...

The other side of the river...

The bear went across the meadow...

Then I brought out a non-fiction book to show all the different kinds of bears, Bears! from Time For Kids. I was really torn between this one, which has photographs of real bears, and Bears! Bears! Bears! by Bob Barner that has a fun rhyming text and a map at the end showing where each type of bear lives. I decided I really wanted them to see real bears, so I went with the first one, but in retrospect, I realize I could have shown them as part of the introduction, then read the second book to elaborate on them as one of the stories.

I found a song on Jbrary that was the perfect follow-up to this, adding a verse for panda bears to the Jbrary version:

"Grizzly Bears"
(to the tune of "Mary Had A Little Lamb")

[I showed a picture corresponding to the bear in each verse,
then pulled out a real teddy bear at the end.] 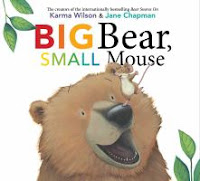 I ended up using another one of Karma Wilson's Bear books, also illustrated by Jane Chapman, because it just came out this past year and I always like to introduce new books, and I really thought it would work well as a read aloud.

Big Bear, Small Mouse is the third "concept" book for the series, with the first two focusing on colors and counting. Throughout the story, as we see what Bear and his friends are up to, we are presented with opposite pairs, like big-little, slow-fast, quiet-loud, and cold-warm.

We finished up with our closing song and passed out stickers.

How It Went
Today was not a typical day, for a number of reasons. First, it was the first storytime after Christmas break. Second, we had our first snowfall of the year overnight, and not only were the kids excited about the snow, but the daycare had opened 1 hour late, so they were off the normal routine. And third, there were two new students who were a little apprehensive. Because of the weather, it was a much smaller group than usual, which was probably a good thing, considering.

Despite the circumstances, the kids did pretty well other than being a bit more chatty than usual, and settled down pretty well after having a chance to tell me about their Christmas presents, and one who got a new baby brother. One of the new students warmed up pretty quickly and started participating, but the second was having a harder time adjusting and clung to one of the teachers the whole time.

This group really seemed to like Bear Snores On, which I was pleased to see as some groups don't seem to appreciate Bear as much as I do. They didn't really get into "The Bear Went Over The Mountain" at all for some reason, but did like "Teddy Bear, Teddy Bear" and "Grizzly Bears".
Posted by Jen at 1:10:00 PM