So, with my regular storytime falling on March 17th and being of Irish descent, I had to do a St. Patrick's Day-themed storytime. It took a little digging to find some suitable books, but luckily (and surprisingly) I found some at my small local library rather than where I work.

We started with our welcome song, then talked a little bit about how St. Patrick supposedly drove all the snakes out of Ireland, and some of the G-rated ways people celebrate St. Patrick's Day. They were already aware it was St. Patrick's Day and that people wear green. We also talked about clover/shamrocks, and how finding one with four leaves is supposed to be lucky. Then we sang our story song to get ready for our first book. 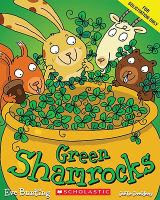 In Green Shamrocks by Eve Bunting and Joelle Dreidemy, Rabbit plants shamrock seeds in order to have shamrocks just in time for St. Patrick's Day. But, when he goes out to pick some to make a chain, the whole pot is gone! Poor rabbit is in a panic to find them before someone eats them

The illustrations are bright and colorful, and the story has drama and humor, as well as an opportunity to talk about gardening, misunderstandings, and compromise.

After that we counted down from 5 to 1 with a little shamrock fingerplay I found at Sunflower Storytime and made laminated clip-art shamrocks with magnets attached as a visual aid: 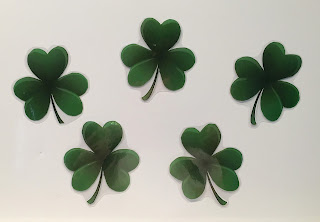 Two green shamrocks nodding in the sun.
Brother picked one, and that left one.

One green shamrock for St. Patrick's Day fun,
I picked it, and that left none! 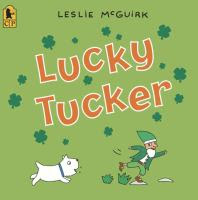 Our second book was a cute story by Leslie McGuirk called Lucky Tucker. Tucker is a little white dog whose St. Patrick's Day is getting off to a bad start. He wonders if his luck will improve if he rolls in a bed of four-leafed clover. As he chases after the leprechaun who assures him his luck is about to change, he finds that indeed his luck has improved.

This is a short simple story with brightly colored illustrations that are clear but not too detailed. It introduces both the idea of four-leaf clovers being good luck, and the leprechaun, which many children may not be familiar with.

I followed this with a great flannel board from Jen In The Library inspired by one of my favorite childhood cereals, Lucky Charms, which she modified from Storytime ABC's version that was modeled after Martin and Carle's Brown Bear, Brown Bear, What Do You See? 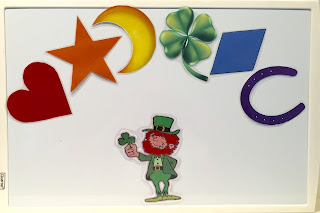 Leprechaun, leprechaun, what lucky charms have ye?
I have a red heart here with me.

Leprechaun, leprechaun, what lucky charms have ye?
I have an orange star here with me.

Leprechaun, leprechaun, what lucky charms have ye?
I have a yellow moon here with me.

Leprechaun, leprechaun, what lucky charms have ye?
I have a green clover here with me.

Leprechaun, leprechaun, what lucky charms have ye?
I have a blue diamond here with me.

Leprechaun, leprechuan, what lucky charms have ye?
I have a purple horseshoe here with me.

Children, children, what colors have we?
Red, Orange, Yellow, Green, Blue, and Purple 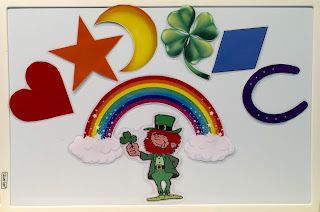 Children, children, what do those make?
A rainbow! 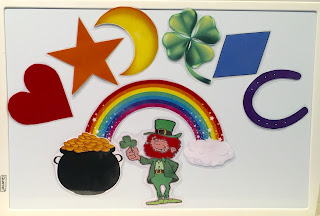 And what can you find at the end of the rainbow?
The leprechaun's pot of gold!

I followed that with a song that incorporated some movement, and ends with the kids sitting down for the rest of the story that I found at Literary Hoots:

Clap, Clap, Leprechaun Clap
(to the tune of "Skip to My Lous") 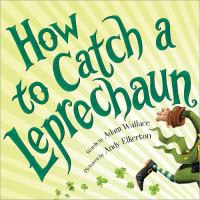 This made a great segue into our last book, How To Catch A Leprechaun by Adam Wallace and Andy Elkerton, which I led into by explaining the legend that if you catch a leprechaun he has to give you his gold, but that leprechauns are very hard to catch and like to play tricks on people.

This book shows the leprechaun sneaking in and out of people's houses playing his tricks, and escaping all manner of traps. The traps start out simple and become more and more complicated, but the leprechaun still manages to escape. Perhaps you can design a better trap for next year? Cute and funny, with vibrant illustrations, and a 4-leaf clover hidden in the endpapers.

After that we did our closing song and passed out stickers.

How It Went
Being a good Irish lass, I was excited about doing this storytime, and felt like I had found some good books and some really cute songs and rhymes to complement them. However, I came down with the flu last week (despite getting a flu shot every year for the last 15 years!), and while I am no longer contagious I have not yet fully recovered, so my execution was a little lack-luster due to the residual fatigue and dizziness.

The kids still seemed to enjoy it, though. They really got into Green Shamrocks, with the drama of the missing shamrocks, and the silliness of the goat wearing the pot on his head. One little girl was so excited when the shamrocks started sprouting. Lucky Tucker didn't fair as well, though, as it did not hold their interest at all and there was a lot of talking and moving around. But they all settled down for How To Catch A Leprechaun, and really seemed to enjoy all the leprechaun's tricks.
Posted by Jen at 4:04:00 PM