Lately the themes for my Storytime-To-Go program have been repeats, and I didn't really do anything significantly different from the last time, so I didn't bother to write them up. But this time, while I didn't really use a novel theme, I did use a new assortment of books and activities. This was just a generic "Animal" theme, as a way to use an assortment of good books that had not been used in our previous, more specific themes, such as "Jungle Animals," "Zoo Animals," "Oceans," or "Farm".

Each session is approximately 25 minutes (depending upon whether the class arrives on time!), and I generally do 3 books and 1 or 2 songs/rhymes/activities with each one, but it does vary. I start each session by introducing the topic and the letter-of-the-day ("Aa"), then we sing our story song to help us settle down. I use a variety of books over the course of the two-week rotation.

With this particular selection of books, we ended up incorporating a lot of activities with the stories, rather than as a separate activity. For example, both From Head To Toe and Spunky Little Monkey incorporate movement. Also, I had sets of flannel board pieces to go with both Brown Bear, Brown Bear and Quiet As A Cricket so I would hand out pieces to each child prior to reading the story, then when I got to the point in the story where their animal was mentioned, they would bring it up and place it on the board. They always love being able to participate in this way, and it was nice to have a different way of doing Brown Bear, Brown Bear since everyone knows it. 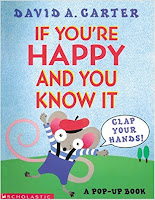 Another book that was used to incorporate an activity was David Carter's pop-up If You're Happy And You Know It, which features pop-up animal characters that illustrate the appropriate action for each verse when you pull the tabs, such as clap your hands, wag your tail, pat your head, and touch your toes.

This book is really cute, and everyone seemed to really enjoy it, including the adults. I think everyone's favorite was the little dog wagging his tail.

Then I also had some photographs of a number of different animals so they could see some realistic pictures of animals they might not be familiar with, like the armadillo, though I think they did end up knowing most of them. 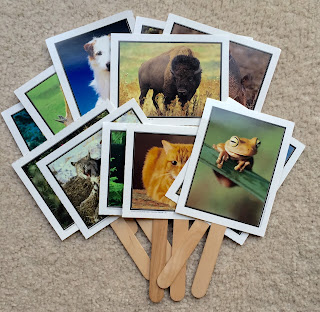 Though all the books worked fairly well, the ones they seemed to enjoy the most were Ernest, the Moose Who Doesn't Fit, Brown Bear, Brown Bear (no one ever seems to get tired of that), Who Ate All The Cookie Dough?, Wild About Us, and Animals Should Definitely Not Wear Clothing.

They really enjoyed having the animals from the two stories to put on the board, and I really liked how it worked out that we didn't have add separate activities, because several of the books incorporated movement and song with them. The kids seemed to like this better as well.

Whose Nest? worked better for some classes that others. I did like how it showed that lots of other animals besides birds build nests, and one little girl was really fascinated when I told her I had a leopard gecko at home like the one in the book. I showed them a couple of photos of him, and she asked me a couple of questions about his lifestyle and diet, and a couple of kids said they wanted to get one, too. Here is a picture of him celebrating Dr. Seuss' birthday: 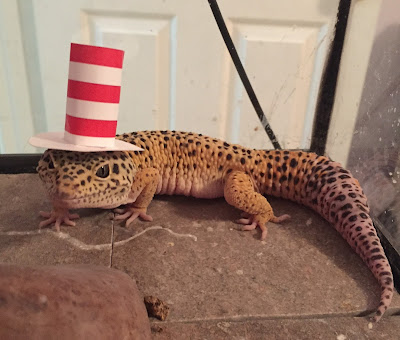