The 2-week rotation for the "Farm" them on the Storytime Bus ended up being shortened because of a holiday, and my having to take a sick day. Then on top of that, a couple of the daycares I visited did not send as many groups as usual, so I ended up not using as many books as normal. We began each storytime with an introduction and letter-of-the-day, which was "Ff", and our story song.

In Cock-A-Doodle-Moo! by Bernard Most the poor rooster has lost his voice and can't wake the farm. He manages to wake one of the cows by pecking her and she offers to help, but has a hard time getting it right. The audience will laugh at the cow's mixed up attempts at "Cock-a-doodle-doo!", and join in with the animals' snoring and laughing. In the end, the rooster and cow decide to work together and wake everyone with a "Cock-a-doodle-Moo!" from then on.

Chicks Run Wild by Sudipta Bardhan-Quallen and Ward Jenkins is a hilarious story about 5 little chicks who keep sneaking out of bed and playing. Eventually Mom decides to join in rather than keep fighting them and has them all dancing until they are begging to go to bed and sleep. Kids can relate to having trouble settling down for bedtime and can join in with saying "...those chicks run wild!"

In Book! Book! Book! by Deborah Bruss and Tiphanie Beeke the farm animals are bored after the children start back to school in the fall, so they decide to go into town to find something to do. They see smiling people coming out of the Library, so figure that must be a good place to go. Unfortunately, the librarian doesn't understand animal talk, until the chicken goes in. The kids will recognize the storytime going on in the library, and then see the animals having their own storytime at the farm.

The Cow Loves Cookies by Karma Wilson and Marcellus Hall shows all the farm animals eating appropriate food, except the cow. The horse gets hay, the chickens get chicken feed, the geese get corn, the hogs get slop, and the dog gets dog treats. But the cow gets cookies! As it turns out, the farmer and the cow have made a bargain, and enjoy cookies and milk together.

Do Cows Bark? by Dorling Kindersley is a great little book about farm animal sounds for the younger kids. I like that it is not so simple as "What animal says 'Moo'?", and instead asks a slightly more complex question, "Do cows bark?", which requires them to think for a second or two, then say no, that cows "Moo". Then you can ask who does bark.  I just wish it was a little larger.

Cluck, Cluck Who's There? by James Mayhew and Caroline Jayne Church is another short, simple book for the younger kids. This lift-a-flap story shows Hattie the Hen and her three eggs, which are hidden under the flaps. Then, one by one the eggs hatch. In the end, the three new chicks cuddle under Mama's wings to sleep.

Chick by Ed Vere is a short, simple pop-up book that has little text with simple, charming bright illustrations with a bold heavy outline. First the egg cracks and we see the chick's beak poking through. The chick hatches, the chick says "Cheep", the chick eats, the chick poops (with a spinning wheel for realistic pooping action :D), and then the chick sleeps.  Simple, and cute, great for younger kids or when you need something really short to fill the last couple of minutes.

Giant Pop-Out Farm by Chronicle Books is a guessing book. Each spread gives a few clues, then you open the flap and the pop-up reveals the answer. The problem I had with this book is that most of the kids don't really listen to the clues. They just glance at the pictures and start yelling [sometimes random] guesses, and they assume all the answers are animals, even though they aren't.

I did not use as many different activities this rotation since these were so much fun I used them with almost every group.

I had some pictures of animals attached to popsicle sticks that I used along with this song to help the kids know what animal we were doing next: 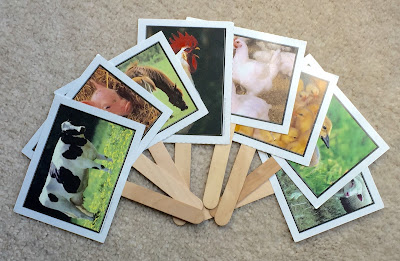 (act out each activity)

"I Know A Chicken"
by Laurie Berkner

*Use with shaker eggs

This is a great song!  It has a catchy tune, it is a sing-and-repeat type of song, so it is easy for the kids to sing along, has lots of movement, and uses shaker eggs. Everyone loves this song, so I used it with every group.

How It Went
Kids love making animal sounds, so this theme is always a hit!  Cock-A-Doodle-Moo! and Chicks Run Wild were big hits with everyone, and Do Cows Bark? was a great book to use for the younger kids. The Giant Pop-Out Farm really didn't work all that well as most of the kids didn't listen to the clues and just started randomly yelling out farm animals, even when I told them some of them were not animals. Adults and kids alike *loved* "I Know A Chicken", and some kids were still singing it when they left.

I had been told that many of the urban kids we serve do not know farm animals at all, but I found this was not the case. Most of them recognized most animals and knew their sounds, though they might occasionally confuse similar animals, such as ducks & geese, sheep & goats, or horses & donkeys. I don't think many of them really understand that the milk we drink comes from cows, or have any idea how you get the milk from the cow.

The regular school year ended during this rotation, and the summer session started. For some of the facilities I go to, this meant a lot of change, with some kids staying home for the summer, new kids coming on, different classrooms and teachers, and different routines. So, understandably the kids were more restless and harder to keep engaged with all the change. Even at facilities where summer really isn't that different, the kids still seem to sense when summer vacation starts and their energy level changes and they become more restless. So we just try to stay away from longer books unless they are super engaging, and often end the session a few minutes earlier.
Posted by Jen at 4:00:00 PM