Today's storytime didn't really have a theme per se, but all the books did end with an unexpected twist. This was because I recently put together a couple of lists of books with surprise endings (one light, one dark), and as I was checking out some of the books suggested by other youth services professionals I came across a couple I really liked and couldn't wait to use!

We started with our welcome song and very brief introduction, and then sang our "story song". The first book I chose to read was Wolf's Coming! by Joe Kulka (the first book he has written and illustrated, rather than just illustrated). I could see right away that this would be a great storytime book!

The story builds suspense as the animals call "Wolf's coming!" and run inside to hide, as the wolf gets closer, and closer! The dark illustrations and Wolf's fierce appearance help set the suspenseful mood. Then, Wolf is finally there, all the animals hide, then........jump out and yell "Surprise!", because it's Wolf's birthday!

We sang "Happy Birthday" to Wolf, then followed that up with:

"If You're A Wolf And You Know It" 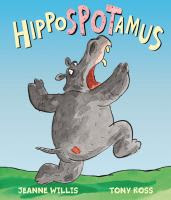 Next we read Hippospotamus by Jeanne Willis and Tony Ross. This is a funny, silly rhyming story about a poor Hippopotamus who has a red spot on her bottom and is concerned about what it could be. All the other animals have different theories, such as measles, hippopox, jungle fever, potamumps, allergies, etc., and recommend different treatments, to no avail. The spot still remains. Then a young boy comes around and seems to be looking for something he might have lost. He spies the hippo and says, "That's not a spot!.......That's my bubblegum!" as he pulls the gum off the hippo's bottom and puts in back in his mouth.

The illustrations are bright and colorful, not too detailed, though the addition of "-otamus" to so many other words sometimes can get a little tedious. I knew as soon as I saw it that it would be great to pair with the "Icky Sticky Bubble Gum" song that is a hit with my co-worker's regular storytime crowd.

Repeat for as many verses as desired. We did knees, belly, elbows, shoulders, friend, & head. (There are various versions of this song, but I modeled mine after David Landau's.) 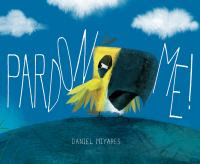 Our last book was Pardon Me! by Daniel Miyares. This story is told mostly with the illustrations, as the text is rather sparse. A small parrot is looking for a place to perch and rest in a swampy area, but there are no trees. Finally, he spots a small plot of land where he can stop to rest. He is soon joined by a large white heron, a frog, and a turtle, each saying "pardon me" as they crowd him more and more.

He has finally had enough, and when the fox says "Pardon me, but you're sitting on a...", the parrot interrupts him in a loud fit of frustration, scaring the other animals away. He is glad to have his little island all to himself again, but soon realizes he should have let the fox finish his sentence as his island turns out to be a crocodile! A little dark, but a good lesson in not interrupting!

Then we concluded with our closing song, and stickers.

How It Went
I had a pretty small group today, started with 7 and ended with 9, because of some being on vacation and others sleeping late, which was kind of nice for a change. They were easier to manage and we had more fun with having more space and being able to be a little more relaxed.

They loved Wolf's Coming!, though the suspense was almost too much for them by the end. I saw lots of wide eyes and heard several gasps and whispers of "He's going to eat them!" so they were happily relieved to get to the end and discover it was just Wolf's birthday, and enjoyed singing "Happy Birthday" to him. Most liked Hippospotamus as well, and were really curious to find out just what the spot was, but I did lose the attention of a few. I think adding "-otamus" to so many other words made it confusing and hard to follow for some of the younger ones. They were all properly grossed out at then end when the boy pulled his bubble gum off the hippo's butt and put it in his mouth, with a collective "Ewwwww!".

Pardon Me! did not go over quite as well, they didn't like the sparsity of text and wanted more of a story, and only a few really got the ending, but the ones that did laughed at the dark humor. Of course the "If Your'e A Wolf And You Know It" was a hit like any activity that involves making animal sounds, especially howling or roaring, and they really liked the "Icky Sticky Bubble Gum" song, even the teachers seemed to enjoy it.

And the biggest complement of all, was as I was gathering my things, I noticed the teacher had pulled together a large plastic hippopotamus toy, another book with a hippo (might have even been non-fiction), and a CD called "Jazz Wolf" (soft jazz music with wolves howling in the background) to play at nap time. I always take it as a huge compliment when the teachers extend the themes from my storytime after I leave.
Posted by Jen at 12:39:00 PM