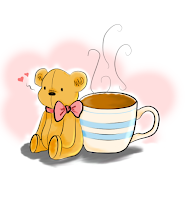 Isn't it funny how some days everything just clicks and goes well, and the littlest thing can make your day, and you leave work energized and full of warm fuzzies?

I had a day like that yesterday. It's hard to even put my finger on why it was so great, and it's not like I have bad days very often, almost never in fact. But some days are just a little more satisfying than others. The kids I saw were all well-behaved and enthusiastic, and I enjoyed all the books we read, they were so engaged and coming up with answers I didn't really even expect them to know!

I was doing the letter-of-the-day with the group of older kids (older 4's and some 5's), which happened to be the letter "Bb" because our theme was "Bugs". After I showed them the lowercase "b", I asked them if they wanted to see a trick, to which they all said "Yes!".

"That's AMAZING!" said one boy.  I love it how most preschoolers are impressed by the little things.  He just made my day.

Then I had a group of just-turned-3-year olds, and this was their first time aboard the Storytime Bus and some of them were very apprehensive. First timers are usually either apprehensive because they think we are taking them somewhere, or disappointed because we don't! This one little boy did not want to get on at first and took some coaxing and reassuring by his teacher.

But then, once he was on and saw the bug decorations on the walls, he quickly forgot his fears and got very excited! Evidently he really likes bugs, especially ladybugs. He was SO excited and enthusiastic the rest of the time, he had trouble containing himself! He just couldn't stay seated and kept popping up every time something interested him, which was pretty much every page!

I got so tickled at him; it was obvious he wasn't doing it on purpose, but was just a reflex reaction to seeing something that excited him. He was like a little jack-in-the box! He was so cute and so enthusiastic, and since it was a very small group, it wasn't that disruptive. We'll work on staying seated so everyone can see over time, but I definitely don't want to squelch his enthusiasm.

It's days like this that I absolutely love my job, and I just try to remember them on the days that are not so good or when I have the blah's....
Posted by Jen at 6:45:00 PM