"How-To" Festival Program - "How To Ice A Cupcake" 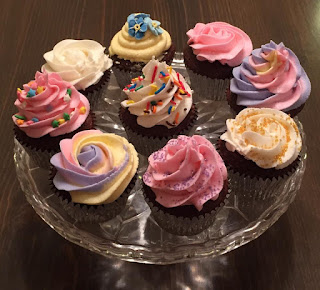 I got to do something a little different last week. While I normally do preschool literacy outreach, i.e. storytime, this week I did a program geared for adults (but kids were welcome, too).

The library I work at hosted a "How-To" Festival, with informational sessions going on most of the day about all kinds of things: urban chicken farming, jewelry-making, knitting, self-defense, college financial planning, and more. Some were hands-on, most were demonstration. After a presenter from a local bakery backed out, I was asked to fill-in as I used to have a home-based cake business prior to working at the library, and I was happy to do it (I've been dying for the chance to put my cake decorating skills to use in programming).

The only downside was that I was only slated for a 30 minute time slot, which boils down to about 15 minutes after you allow 5 minutes to quickly set up, 5 minutes of questions, and 5 minutes to clean up. So I had to really pare it down to showing just two of the most basic techniques. I have both step-by-step photos (click on the collages to view them in a larger size), and video segments with verbal instructions and tips (click on the links within each segment, or the complete list at the end).

First, to prep the bag and fill halfway with buttercream icing: 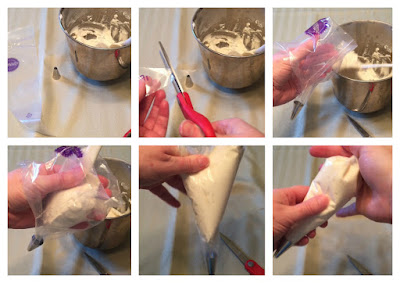 The first technique I call the "Ice Cream Swirl" because it looks like a soft-serve ice cream cone. This is for the icing lover!

Next is the "Rosette", which I prefer. There is a current trend to decorate birthday and wedding cakes by simply covering them with these large rosettes. Looks elegant and fancy, but so easy to do with a little practice! There is also a slow-motion video of this technique so you can really get a feel for the wrist movement and tip angles. 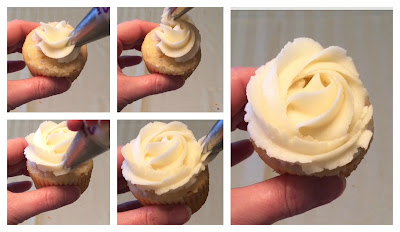 This next one is slightly more challenging, but so impressive! By carefully loading the pastry bag with different colors of icing, you get a rainbow effect! I used three colors here, but beginners should start with two. The rainbow technique works well for both the ice cream swirl and rosette techniques.

I also mentioned several ways to embellish them, with a few examples, such as: colored sugars; rainbow, chocolate, or pearl jimmies, shaped sprinkles, and pre-made icing decorations (these should all be applied as soon as you are finished piping while the surface of the icing is still wet).

And here's a time-lapse video that shows preparing the bag and piping a rosette. I decided not to embed all of the video segments I made, but links to them have been included both in the body of this post and at the end.


I had several families attend, and I think it went pretty well other than being a little rushed and only being a demonstration. I really would have liked to have more time and be able to make it a hands-on activity. I think people would have gotten more out of it that way, but that decision was not up to me. I think I did the best I could in the very limited time I was allowed. I had one little girl come up to me at the end to ask about how to load the different colored icings in the bag for the rainbow technique, and she couldn't have been more than seven, but she was so poised and articulate and sounded so grown up asking her question!

I had expected more questions, but only got a few, and only one person took one of the books I had on display to check-out. I suspect that several people came not so much out of a sincere interest in learning how to decorate cupcakes, but in the hope they would get to eat cupcakes. If that was the case, they were sadly disappointed since our Policies & Procedures prohibits us from giving out homemade food items to the public. So I gave them to my co-workers instead :)

I hope I get an opportunity to do some kind of stand-alone program using my cake decorating skills, but one with more time, hands-on, and marketed a little differently. Some ideas I have are cupcakes, how to ice a cake like a pro, how to reproduce your child's favorite character on a cake, mini-gingerbread houses, or cookie decorating.

**Slight Disclaimer - The photos from my actual program did not turn out very well and missed a lot of steps, so I re-created my demo after the fact in order to get better, step-by-step photos and try to get some video. I decided not to embed all the videos, but links to them are listed below if you'd like to see them and hear the instructions and tips. They are generally about 1-2 minutes in length, and are admittedly pretty amateur.

Email ThisBlogThis!Share to TwitterShare to FacebookShare to Pinterest
Labels: Other Programs