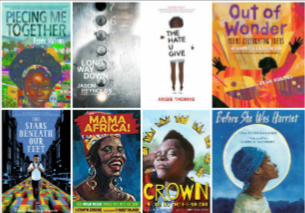 So I've already written a post about all of the YMA's in general and the Newbery specifically, and over the next couple of months or so I'll be posting about each individual award as I finish reading all the winners and honorees.

So next up are the Coretta Scott King and CSK-Steptoe Awards. This was an easy category to finish since three of them were also Newberys and one I had already read!

Though I wasn't as happy with Piecing Me Together by Renee Watson and Long Way Down by Jason Reynolds for the Newbery because they are definitely teen books (I know the Newbery is up to age 14, but I think these were pushing it), I thought both of them, along with The Hate U Give by Angie Thomas, were excellent books with good writing, well-developed characters, and intriguing plots, and would have been happy with any of the three as the CSK Author medalist and was not suprised at all that two of them were Printz honorees as well. I might have picked Long Way Down over Piecing Me Together, but it's a very close call!

I must admit, I was surprised that neither THUG nor Dear Martin were named Coretta Scott King-John Steptoe award winners, since that award is to recognize new authors (and illustrators) and both were Morris new author finalists. I have not read Dear Martin yet, but have heard a lot of praise for it. While the CSK-Steptoe award isn't limited to YA like the Morris, I feel that THUG was better than David Barclay Moore's The Stars Beneath Our Feet. Stars was okay, and had some good points, but I felt it was a little slow at the beginning, needed better editing, and had some questionable LGTBQ representations. 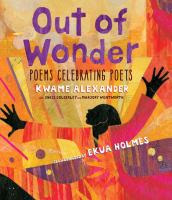 I'm not a poetry person at all, but I was impressed with Out of Wonder: Poems Celebrating Poets by Kwame Alexander, Chris Colderly, and Marjory Wentworth. While it won for Ekua Holmes' beautiful illustrations, I really like the idea of paying tribute to a multitude of poets by writing poems imitating their style. I also liked that poets of all time periods, genders, and ethnicities were represented, and listed in the back organized by time and genre. I could see the rare kid who likes and appreciates poetry loving this book, and it could be useful to expose children to different kinds of poetry. While Before She Was Harriet by James Ransome and Lesa Cline-Ransome was also honored for illustration, once again, I really liked the text as well.

Mama Africa! How Miriam Makeba Spread Hope with Her Son illustrated by Charly Palmer and written by Kathryn Erskine, the SCK-Steptoe new illustrator winner, is the only book I was not able to get my hands on as neither my local library nor the system where I work has it, and don't appear to be planning on ordering it. I did look at the few pictures I could see on the Amazon preview and read the summary. From what I could see, the artwork is vibrant and reminds me of a couple of previous CSK and Caldecott winners/honorees. 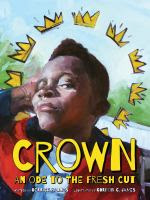 And that brings us to Crown: An Ode to the Fresh Cut, which was honored both for text and illustrations. I really liked this book, and was immediately attracted to the cover before it ever won an award. However, I find myself questioning how this book would be used? Who is its reader? It's a picture book, but too much text for preschoolers and many kindergartners, and seems like the theme would be better appreciated by older elementary aged kids. But would they think the picture book format was too babyish? I'd love to hear some comments on this! I like it, but I'm not sure who to recommend it to.

I'm slightly surprised Clayton Byrd Goes Underground by Rita Williams-Garcia was not an honor book, but the field was extremely competitive this year, and it seems like this was a year for YA books overall.

Having not been in this field very long, and lacking any historical literary perspective, I really have no comment about the SCK-Virginia Hamilton Award, though I imagine it was deserved. A quick search reveals Eloise Greenfield has a large body of work over a number of years, but I must admit I'm not familiar with any of them.

Well, there's my thoughts. I'd love to hear yours! As I go back and write full reviews, I'll come back and add link to them.