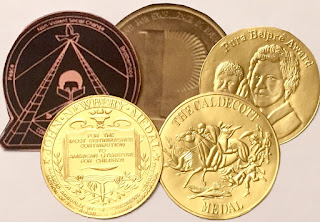 Now that the big announcements have come and gone and we've all had several days to mull it over, what did you think?

Did any of the ones you expected win? How many caught you completely off-guard? I have to say, I was left feeling extremely frustrated!

I've only worked in library world for 5 years, and the year before last was the first time I really paid that much attention to the awards, though after the fact. I had actually already read one of the Newbery honors, and made a point to read the winner and rest of the honors, as well as the Caldecott winner and honor, Coretta Scott King winners, and at least summaries of all the other YMA winners and honors. Last year I found I had already read the Stonewall middle-grade winner, one of the Printz honors, and one of the Morris honors. But no Newberys or Caldecotts.

Whereas in the past, I just grabbed whatever caught my eye off the shelf to read, this year I actually made a real effort to read mostly new books and to pay attention to what books people were talking about. I thought for sure I would end up having read more of the books that would get honors, and have less catching up to do. I was so confident in my reading this year, I even dared to make a few predictions!

And believe it or not, I ended up doing worse this year 😞  ! How did that even happen? Out of all the books that won medals or honors at the YMA's, I had only read ONE of them! And that one was a YA book, not even an area in which I claim expertise. At least that one, The Hate You Give, did win the Morris award, Printz honor, and CSK honor as I predicted. There were a couple of other books on my radar that I just had not had a chance to read yet, like Long Way Down, The Stars Beneath Our Feet, The Gentleman's Guide to Vice and Virtue and Crown, as well. I had tried to read Vincent and Theo, but just couldn't get into it because it seemed so dull and choppy to me. 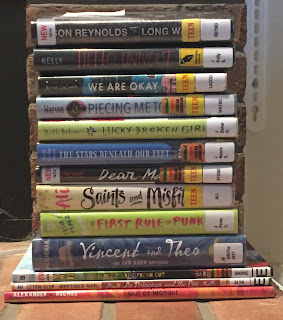 But I could not believe that not one of the half-dozen books I had in mind for the Newbery got so much as an honor, and I had not read any that did. Worse, I had not even heard of the two actual middle-grade books that did. So once, again, I will be playing catch-up for quite a while, or until I give up due to lack of time. I now have quite a stack of books in my "to read" pile since I was on the computer placing holds as fast as they announced winners! But I still have about this many more left to come in or request once I make a dent in these.

So far, I have read Crown, Out of Wonder, La Princesa and the Pea, Grand Canyon, Long Way Down, Hello, Universe, and Piecing Me Together. Some I can see why they won, but I'm not sure how many kids will actually read them, but I can certainly see why Long Way Down was chosen for multiple honors. It is an amazing book, and I'm certain will appeal to it's intended audience. But, I have to say Hello, Universe really left me wondering. I found it to be very average, very slow at the beginning, and very predictable. It did score points for diversity, but I don't see how it was considered to be the single "most distinguished" book in children's literature from that year. In my opinion, two of the honor books, Piecing Me Together and Long Way Down were far more "distinguished".

What's more, I was not the only one who did not see that coming. I looked at predictions made by those with far more experience than me and the results of several "mock Newberys", including the one by Library School Journal which I followed closely, and found that hardly anybody had the actual winner on their radar, often not even on the long lists. I did feel a bit vindicated to see some of the titles I had predicted showed up in others' predictions fairly frequently. By looking at all of these, The War I Finally Won should have been at least an honor book, but no. I think the fact it was a sequel killed it's chances. I was glad to see that The Librarian of Auschwitz and Refugee did pick up Sydney Taylor Awards later this week, and Refugee also won a Cybil.

So what does all of this mean, besides that I suck at making predictions? Personally, I think it demonstrates just how HIGHLY subjective these awards are. If you put several different panels together, you would end up with several very different results. It is just too subjective and can be swayed by the opinions of a few dominant personalities, politics, social trends, etc. Really, with the tremendous body of work published each year, the idea that one committee with just a few somewhat subjective criteria to follow can winnow out THE ONE absolute best book of that year is a little ridiculous. A lot of it is getting noticed by the right people, and there are a lot of good books out there that just don't get noticed. Frankly, I don't believe there even is one single book that is above all others.

So what do these awards mean? Well, they mean a lot of recognition and sales for the authors & publishers. But in all honesty, they don't mean a whole lot to me. When a book wins multiple honors in several categories (or from multiple entities) like Long Way Down or Crown, that tends to get my attention and seems a better indication that it is a good and significant book. I also pay attention to the Morris and CSK-Steptoe awards for new authors to watch for. It is significant that for the first time in history, the Newbery winner and honors were all written by authors of color.

One last topic for discussion, what do you think about picture books and YA books being included in the Newbery? Yes, I know that *technically* they fit the criteria, and picture books have no other ALA-sanctioned award that recognizes the text, but I feel between the Printz and Morris awards, YA lit gets plenty of recognition, while middle-grade lit has no award of it's own, if it has to share the Newbery with picture books and teen books.

So, any thoughts or opinions on this years winners, or the whole process in general? Were you as caught by surprise by some of them as I was? Please tell me it's not just me!

Here are some links to various award lists (please add any others in the comments):