This has been a rough month, with so many assignments do with school, significant changes at work (I'll probably post about this at some point, but not now), taxes due, and family stuff, so I've had no time to read and little time for writing, so the posts are a bit thin this month.

A couple of weeks ago I finished up a two-week storytime rotation with the theme of "Cats" on the Storytime Bus. We started each session with our story song and Letter-of-the-Day (Cc), then read 2-3 books and did 1-2 other songs/activities with each group. These storytimes are not planned out; but done "on the fly" as we constantly have to adjust to the time we have (groups are often late), children's ages, personalities, and mood on any given day.

Mama Cat Has Three Kittens by Denise Fleming, short & simple, good for younger kids
Matilda's Cat by Emily Gravett, what does Matilda's cat like to do??
Kitty's Cuddles by Jane Cabrera, short & simple, bold, simple illustrations, for younger
What Will Fat Cat Sit On? by Jan Thomas, not my favorite of hers, but still OK
Come Out and Play, Little Mouse by Robert Kraus, José Aruego, & Ariane Dewey, days of the week
Cats by Matthew Van Fleet & Brian Stanton, all different kinds of cats
Widget by Lyn Rossiter Mcfarland & Jim McFarland, dog acts like cat to be accepted
Mean Murgatroyd and the Ten Cats by Nathan Zimelman & Tony Auth, bully learns lesson
There Are No Cats In This Book by Viviane Schwarz, silly
Time To Sleep by Kandi Radzinski, little cat tries to find a good place to sleep 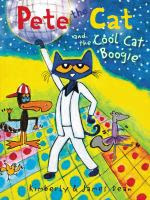 And I had already returned this book as it was from the circulating collection rather than our office storytime collection, but you could not possible do a "Cat" storytime without the currently VERY popular Pete the Cat!
While I think the original books with Eric Litwin are superior, I did opt to use a later one with James Dean and his wife instead, because I like the dance at the end: Pete the Cat and the Cool Cat Boogie by Kim and James Dean.

Activities
We did not have a good assortment of songs and other activities for this one, so we stuck to the same two for everyone.

If your a cat and you know it,
and you really want to show it.

And here's my favorite version of it from The Big Bang Theory, as Penny forces Sheldon to sing it with her as a round:


How It Went
This kit was put together before I took over the position, and I hadn't used it before now because I felt it was too specific of a topic. But this year I decided to force myself to try the last few kits at least once before I decided what to do with them.

I gotta say, this was not my favorite, even though I love cats. I thought the books were okay, but rather ho-hum and not extremely engaging. I liked Widget the best, but it's really more about the dog than the cats, and some of the others were cute, but slightly dull. The kids seemed okay with them though. Of course Pete was the most popular, with Fat Cat being next.