It was with mixed feelings that I said "Good-Bye" to the Storytime Bus, my mobile storytime room for the last 3 years, earlier this month.

The Storytime-To-Go program was started just over 5 years ago as the culmination of a dream by our now-retired Youth Services Manager, in conjunction with Outreach Services. An RV that had been previously used by a business as a mobile classroom was donated and renovated to be a mobile storytime room. It had cabinets to store scarves, bells, shaker eggs, and many other manipulatives, an easel with flannel/white board, and a rotating selection of themed storytime kits that contained a variety of books, songs, activities, and felt sets. This is what it looked like in the beginning: 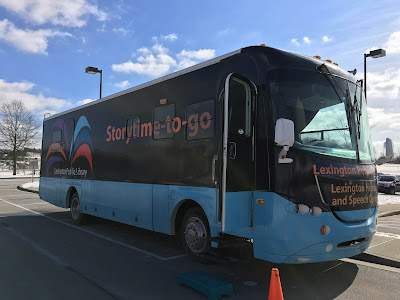 It was dubbed the "Storytime Bus" and would go to various daycares and preschools in the area to bring the storytime experience to kids who might not otherwise get the experience of a library storytime. I joined the program about 2 years in, after it become apparent it would not be sustainable as a strictly volunteer-driven program. Kids would come on the bus in groups of 12 and have storytime. Some were hesitant at first, afraid we were going to take them somewhere, others were disappointed that we didn't, but they all quickly fell in love with the storytime bus, and our driver, Mr. Barry, who gave them stickers at the end.

Unfortunately, the first exterior design for the Storytime Bus made it look too similar to the city transit buses, which not only had the same color scheme, but also had the library logo on many of them as part of a huge re-branding campaign. So people were constantly mistaking us for a city bus and trying to flag us down or board if we were stopped. So we requested a new design that would (1) use a completely different color scheme, (2) be much more whimsical and child-like, and (3) not look anything like a city bus! And our graphics designer did a fabulous job (the other side has a castle, and is pictured further down): 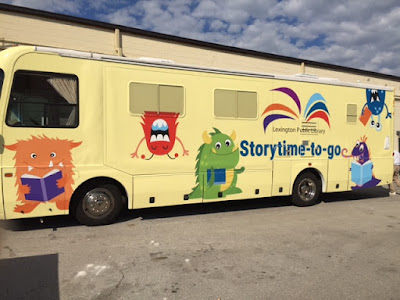 No more being mistaken for a city bus, plus it got a lot of attention as we would drive around town. But, being 13 years old by this point, we started having more and more problems with things breaking down, in addition to the expense of the normal upkeep and secure storage facility where it was parked. And since there was now only one place in the city that would work on it, and parts were getting harder to find, that meant any time it went down, we would be without it for anywhere from one to three weeks! So, when our driver, "Mr. Barry" finally decided it was time to retire this spring, the decision was made to also retire the now 15-year old bus, which I think was the right decision. Here is the bus and her driver after our very last run: 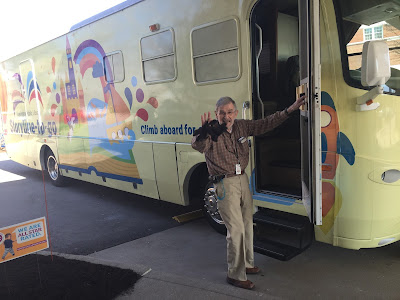 But, though it's a bit sad to see the bus and her driver both retire, the program itself WILL continue! It will just mean I will be going into the classrooms to do storytime, rather than the kids coming to me on the bus. It won't be quite as cool or exciting to the kids, and it means I will be driving all around and lugging material in and out, but the upside is that the teachers will no longer have to worry about the group size (safety & space limitations), which was a hardship for some of them. Now I can go in and just do a whole class together, possibly even combining smaller classes, which will be more efficient and make room in the schedule to add more centers to the roster.

It has been a more difficult transition than I expected, with several places not understanding the program was continuing (even though it was emphasized time and time again, in person and in writing), and being surprised and unprepared when I showed up in their classrooms as scheduled, but hopeful it will all smooth out soon enough!