I had actually planned a Valentine's theme, but the crowd I ended up with was way too young for the only actual Valentine's Day book I had (Froggy's First Kiss), so I ended up using the shorter books I had pulled, which were all about hugs and kisses, though we still did some Valentine's songs/rhymes.

We started with our welcome song, and then I introduced the topic. We talked about how Valentine's day is about love, and the ways we can show we love someone, ending with hugs ("let's all give ourselves a big hug") and kisses "can you blow kisses?"). Then we got settled for our first book by singing our story song. 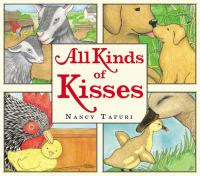 For our first book I selected All Kinds of Kisses by Nancy Tafuri because it focuses on familiar farm animals and the sounds they make, which I hoped some of the younger ones would recognize and be able to do. I also like that it shows mother animals with their babies, and introduces some new vocabulary with the specific names for the young, like "calf" for a baby cow, "kid" for a baby goat, etc.

The text is short and simple, and the illustrations are Tafuri's typical sweet, simple, and slightly understated style (though I'd actually prefer slightly bolder).

We followed that with a little movement. I introduced the following rhyme by having them feel their heartbeat, then jump up and down and see how it beats faster.

I Have a Little Heart

After repeating once, we moved on to a Valentine rhyme, and repeated it as well: 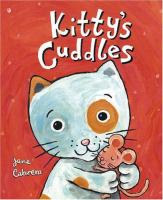 We went from kisses to hugs with our second book, Kitty's Cuddles by Jane Cabrera. I fell in love with this book as soon as I saw it because of Cabrera's bold, rich illustrations that have a heavy texture that makes me want to touch them.

In this book, Kitty shows us all of her friends, and we try to guess her favorite one to cuddle with. While the first book featured familiar farm animals, this one introduces some exotic animals, like the peacock, porcupine, and armadillo, and has short, simple text.

After that, we did one more Valentine counting rhyme:

Five little hearts, all in a row.
(Hold up five fingers, point to row)

The second one said, "Will you be my valentine?"
(Hold up 2 fingers, put up number 2)

The fourth one said, "I will always be your friend."
(Hold up 4 fingers, put up number 4, make sign for friend)

The fifth one said, "We'll be friends until the end!"
(Hold up 5 fingers, put up number 5, make sign for friend) 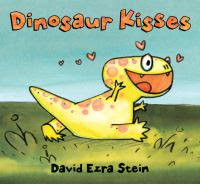 I debated on whether to read a 3rd book since my crowd was so young, but it seemed all the super wigglers had already bailed, and the remaining kids were having no problem listening, so I decided to indulge my dark sense of humor and end with a favorite funny book about kisses that is still short and simple, Dinosaur Kisses by David Ezra Stein.

In this story a hatchling dinosaur is exploring the world and after witnessing a kiss, decides she wants to try that next. But every time she tries to kiss someone, it goes horribly wrong as she accidentally whomps, chomps, stomps, or EATS her intended recipient! Then another dinosaur hatches out, and they have fun chomping, stomping, and whomping each other, then falling down in a fit of giggles.

We then sang a closing song, and moved on to our optional craft, which only a few of those attending were really old enough to do.

Craft
For our craft I had originally wanted to give them lots of hearts of assorted sizes and colors and have them put them together to make various animals, a la Michael Hall's My Heart Is a Zoo; however, our copy was checked out and our new ILS is so slow at processing requests that I didn't get a copy from another branch in time, plus I didn't have time to cut out all those hearts.

So I switched to something a little simpler, making a Valentine person with one large heart, accordion pleated strips of paper for arms and legs, and smaller hearts for hands and feet. I gave them red, pink, and purple small hearts to choose from, plus googly eyes (of course!) and crayons for making the face. [The example I showed had a more simple face, but I decided to embellish it a little afterward.] 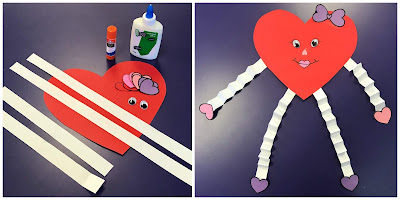 How It Went
This was a perfect storytime for 2-4 year-olds. Unfortunately, I had a bunch of infants and 1-year olds! I had such a sinking feeling when I realized this, especially since at first it was all babies, until thankfully one family showed up a few minutes late with two boys around 3-4. I just froze mentally and didn't know what to do, other that power through what I had planned.

I have extensive experience with preschool storytime, but I have never done a baby storytime and only a couple toddler storytimes, and was not at all prepared for such an overwhelmingly young crowd, and did not know how to change gears that drastically at the last minute. It was a very frustrating and humbling realization. I should have incorporated a couple of baby bounces, but my mind just went blank since it's not something I've done since my own kids were babies! I always have a couple of longer books in case I get older kids, but I realize I have not been adequately prepared for an even younger than the usual young crowd.

Despite the program not really being quite developmentally appropriate for most of the audience, it went okay, though I did lose some of the audience right away. But that always seems to happen anyway as our storytime area opens into the play area, and some kids are just too distracted by the other children playing behind them. Some of the younger kids could be heard making animal sounds, or seen trying to imitate some of the motions we did, and though the two oldest got a little bored during the second book, they LOVED Dinosaur Kisses and laughed and giggled. Thankfully, most of the parents participated and helped answer for their babies, and reinforced what I was doing.

I am definitely going to have to work on my repertoire of songs and bounces to use with the little ones, and make sure I have at least 1 or 2 prepared for each storytime in the future. Just when I start thinking I've got the hang of this family storytime, it throws me curve ball...