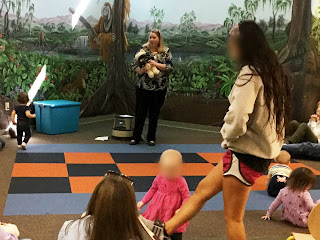 One of our children's librarians at another branch has been on extended leave, and various staff have been taking turns filling in for her programs. I was asked if I was interested in filling in for her "Baby Jam" this week, and I jumped at the chance! "Baby Jam" is our system's babytime for more active babies from birth-18 months. Though all ages are welcome, it's mostly crawlers and walkers with an occasional younger baby or older sibling.

Of course, I was also a bit terrified as I have only done storytime for mostly preschool-ish ages. While I might have a few toddlers and babies, I've never done an all-out baby & caregiver storytime. But, I've observed one, talked to my boss who does ours (I don't work that shift, so I don't get to see it), got a couple of handouts from past babytimes the person I was subbing for had done, and looked at some of the information on Jbrary (of course).

I decided to follow the regular presenter's basic structure, since that is what the crowd was used to and I don't really have my own style for that age group yet, though if it was something I was going to be doing regularly, I probably would've changed some things (more about that later). Her basic structure was welcome, 2 welcome/lead-in type songs with motions, ball play, 2 bounces/tickles, read book, 2 more songs, rhymes, or fingerplays, bubbles, good-bye song, and this is what I did:

I started with announcing storytime was beginning, and passing out the handouts with all of the songs, rhymes, etc., that we would be doing while singing the short "Hello" song I use on my outreach visits:

Then I introduced myself and explained that Miss Christy had been out, but would be back soon, and I might do things just a little differently because we all have our own styles and favorites songs and such. Then I introduced my "baby", the stuffed animal I had brought to model how to do the motions and interactions with their babies. 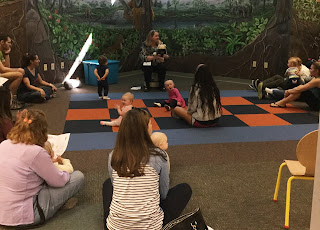 The regular presenter does a welcome song that calls every baby by name, but I did not think my voice was up to 25 verses, so I used a song from Jbrary instead:

Babies love to show off their receptive language by pointing to body parts, and these songs and rhymes are not only fun, they reinforce vocabulary and body awareness. I explained as I modeled with my "baby" how parents could either model by touching their own nose, etc., touch their baby's nose, or help their baby touch their nose, depending on the age and what they were comfortable with.

I followed that with a lead-in song that the regular presenter uses that also has movements for the babies to do or parents to do with them:

Then we got the big bin of balls out, with balls of various sizes, colors, and textures, for them to play with for a few minutes (with music), then I sang the "Clean Up" song while we all picked them up and put them away.

Since they were now all hyped up, I followed this with a more active song that I also got from Jbrary that is supposed to get everyone up dancing, either picking up their child and holding them, or for the more mobile and independent one, holding their hands and dancing with them.

I mentioned that these bigger movements of holding them up high, down low, leaning to each side, and turning around helps develop their proprioception, or awareness of their body's position and movement in space. I personally love this movement song, but the caregivers did not really get into it like I expected.

To settle down in preparation for reading the story, we followed that with a gentle tickle used by the regular presenter, with modification:

Bounce you here, kiss you there,
Bounce you, kiss you, everywhere. 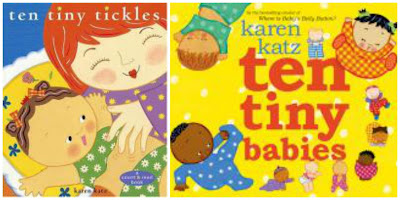 And now it was [finally] time to read our book. I choose Ten Tiny Tickles by Karen Katz, which probably would've been better for the younger "Cuddle Babies" class as it is a sweet, gentle story counting as we tickle baby, working on vocabulary as well. In retrospect, I would have been better off reading her Ten Tiny Babies, which has movements for older, more mobile babies to do, plus has more diversity. But all her books are great for babies and toddlers.

Following the story, we did a classic bounce, The Grand Old Duke of York:

And then the "Five Little Ducks":

(count down to no little ducks)

Then, Mama Duck called with a
"QUACK, QUACK, QUACK!!"
And five little ducks came running back!

We finished up by blowing bubbles with music playing in the background. 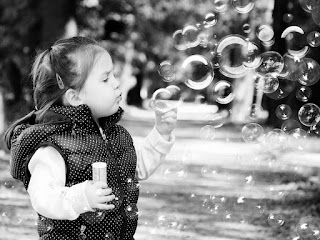 I think it went fairly well. I was a little nervous, never having done that age group before nor having observed as many as I would like, but I didn't suck! Though I love being able to read longer books to older kids who are able to appreciate humor, I had fun with the babies, too, and found I was more comfortable slipping in development and literacy tips with this age.

Each individual part of the storytime was fine, though I did not quite get as much participation from the parents and expected interactions between caregiver and child. Most of the babies were walking, so the parents tended to let them just kind of mill around, though most of the babies did imitate many of the actions. I found that while I liked all the individual parts, I did not feel comfortable with the overall structure for a few reasons.

First, it just felt a little choppy as I quickly moved from one thing to the next, trying to get everything done in our 30 minutes time frame, and the transitions were awkward (that could just be me). I think I would have preferred to leave off a couple of the songs/rhymes, and do more verses or repetitions of the ones we did..

But the biggest thing that felt really off to me was having gross motor play in the beginning, between rounds of songs and before the story. I'm sure those that do it this way have a good reason and it works for them, but to me it just seemed like it got them wound up and left them hanging as there wasn't much time for it. Also, babies start to develop object permanence at 4 months, and it's pretty solid by a year old, so you are risking some serious meltdowns when you have to put the balls away again so soon, and I did have one.

Personally, I would save playtime for the end, and let them have more time with them. And I would probably vary it, and have different toys or more structured play activities, depending on the ages.

If you regularly do Babytime, what is your structure? How many songs/rhymes/bounces do you do, and do yo include gross motor play in the middle or end?