When I first picked this theme, I really didn't know exactly where I was going with it, but it ended up focusing on the light spectrum and diffraction with various activities to produce "rainbows".

I put together a brief PowerPoint to start with, showing how rainbows form, the order of the colors, the fact that they have no end, how double rainbows form (and that the colors are inverted in the outer one), some other optical effects similar to rainbows (glory, halo, moonbow, cloudbow, fogbow, rainbows at waterfalls), and photos of some of the activities we were going to do.

After the introduction and PowerPoint, they divided up and rotated among 4 stations for about 15 minutes before we went outside to repeat some of the activities and try an additional one. I made sure all the activities would work indoors with flashlights (though not as well, and some flashlights work better than others) in case the sun did not cooperate, and they could compare artificial light and natural sunlight if it did.

For all indoor activities, the lights were dimmed and tables covered with black paper to improve visibility.

I set out all four triangular prisms and several different flashlights, and told them to also try
their parents' phone flashlights. One of the flashlights at each station was masked with tape so only a focused beam of light would be emitted.

I encouraged them to experiment with the different prisms and flashlights, and warned that they would have to be patient and rotate the prism and try different angles to get the thin, faint rainbow to appear. Below are the prisms, a rainbow made with a flashlight, and one with a beam of sunlight (click on any image to enlarge).

All 12 crystals were put out on a table with several flashlights. These were a little trickier to use, and did not work very well with flashlights, but when the light and angles are just right, will produce multiple tiny rainbows in different patterns. Sadly, someone apparently pocketed one of my crystals, so there are only 11 pictured below (click on image to enlarge).

Several discarded CDs and DVDs were set out on the table along with several flashlights.

Participants could either see the color spectrum looking directly at the disk, or project a rainbow by shining the light on it at an angle.

1. Two glasses were filled about 3/4 of the way with water, and one was masked on one side to compare, and several flashlights were available. When the light is just right, a tiny rainbow is produced on the table, and if the glass is moved to the edge of the table, it can be projected on the floor for a larger one.

2. A small mirror was placed in a bowl at an angle. When light is shined through the water and reflected off the mirror, a rainbow will be projected on a vertical surface (click on image to enlarge).

1. After trying the activities inside for a few minutes with varied success, we went outside with the prisms and crystals to use with natural sunlight (I also took one of the glasses of water, but it got spilled before we could try it). 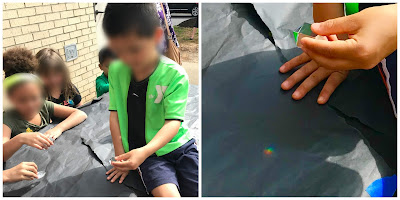 2. Then I gave them spray bottles to see if we could create rainbows with the mist in the sunlight, but we never got it to work, partly because it was getting overcast and the sunlight wasn't strong enough.

After we'd done all the activities, I surprised them with the coolest thing, refraction glasses! When you are wearing these and look at a light, or towards (BUT NEVER DIRECTLY AT) the sun, you will see "rainbows" all over the place, and depending on the source of the light, the effects can really vary. I had strung up some white tree lights, in addition to all the various types of lighting in the library. Below are photos taken of the lights in the library with the glasses (click on image to enlarge).

These things are so fun, and well worth the 75 cents each, in my opinion. I played with them for at least an hour looking at different types of indoor and outdoor lighting after I bought them. Below are some outdoor photos in bright sunlight over the library and reflecting off cars, filtering through the trees at sunset, the moon, and neighbor's outdoor lights. Notice in the last photo you can see that some lights produce the full spectrum of colors, and other only emit specific wavelengths, leaving gaps appearing as black bands in the spectrum (click on any image to enlarge).

*Note - In full disclosure, some of these photos were taken during the program, but some were taken while testing the activities before, or recreating them after, as I didn't get a chance to take many during.

While all of the activities will work indoors with flashlights, they work much better with strong sunlight. I had thoroughly tested everything and made sure it all would work with flashlights and figured out the best ways. I had fun playing with them (and so did my cat, as you can see in the video below).

However, the kids were not as successful because they were too impatient, and not following directions or looking closely enough. They would try once, then give up and race to the next thing; they just were not willing to take time and experiment and problem-solve. They also kept crowding each other and shining their flashlights right where someone else was trying to make a rainbow, totally washing it out. Most had success with the CDs & DVDs, which are by far the easiest, and some had success with the prisms and other activities with help from me, but others were just....well, it was a bit like herding cats at times.

I was a bit frustrated that the adults were not helping more. Sometimes I get a really good group of adults that are involved, and other times they just want to sit in the back and play on their phones. I'm going to have to do better about making the expectations clear from the very beginning, and let them know they are expected to be participants, and assist and supervise their child, and manage their behavior.

There was one funny comment. At the beginning I gave them a little "pop quiz" as a way of introducing the topics we were going to talk about, and one question was "What is at the end of the rainbow?" [which is in reality a trick question, because as we were about to learn, there is no end of the rainbow], and I expected then to either say 'nothing' or 'a pot of gold'. One little boy was very specific, however, saying not just a pot of gold, but that the gold was worth about $30 😃🌈

I think I'm also just still expecting too much for the ages I'm getting, and have to pick easier, more foolproof activities. Stations just don't seem to work for this group, so if I were to do this again, I'd have more supplies and do it classroom-style, which I prefer anyway. I would give each participant, or each family, an acrylic prism (they're cheap enough to be able to by a few sets), one of the crystals, a CD or DVD, a glass of water, and a flashlight and lead them through each activity.

But I would definitely get the refraction glasses, and I highly recommend them for any light- or color-themed activity, or anytime you want a really fun giveaway for less than $1 each. Just be sure to warn them NOT to ever look directly at the sun!
Posted by Jen at 12:50:00 AM