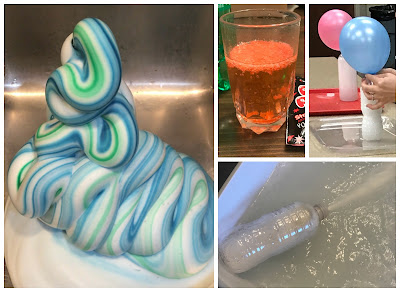 This program was all about gasses, and how we can use the properties of gasses to make things pop, fizz, foam, bubble, squeal, and move!

Number: 15 (I actually had a total of 20 kids, but younger siblings were only allowed to observe, and a couple of families opted to share one set-up to accommodate late-comers.)

Budget: About $40 (I had some supplies left over, and you could reduce cost by having participants work in pairs) 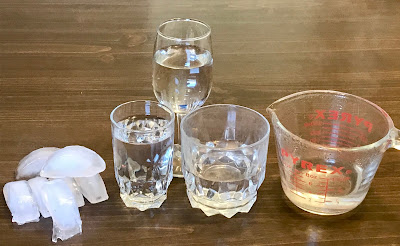 (Each of these represents 4 oz of liquid water)

I explained how molecules in a solid have very little energy, like me in the morning, so they just kinda sit there and don't move around, but when you add energy the molecules move around a little, and when you add even more energy they go all over the place, just like a bunch of over-sugared, over-excited kids, a metaphor they found amusing. I told them that we were going to do some activities that show how the expansive property of gasses can be used to make things pop, squeal, fizz, bubble, and move.


Activity #1 - Inflating a Balloon With CO2 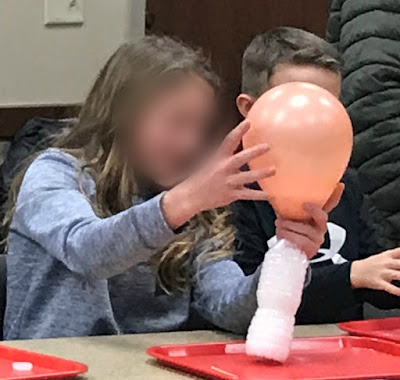 1. I told the kids to first stretch out the balloon and blow it up, then let air out to loosen it up. I took this opportunity to also discuss how the escaping gas causes the balloon to squeal and fly around if let go.

2. I gave them each a 16-oz bottle containing 1 cup of distilled vinegar (I pre-dispensed to save time and mess).

3. They then used a funnel to put 2 teaspoons of baking soda into the balloon, and with a grown-up's help, carefully stretched the balloon over the opening of the bottle, without letting the baking soda come out.

4. When everyone was ready, they lifted the balloon upright to allow the baking soda to fall into the vinegar, observed the reaction and watched their balloons inflate!

*Note: You will need to do trial runs with the bottles and balloons you have to see if the amounts of vinegar and baking soda need to be adjusted to be sure the balloon inflates, but does not burst.

1. I gave everyone a package of Pop Rocks candy and a small cup of Sprite, and told them they could eat a little of the candy to see what they were like, but to save most of them for our test. 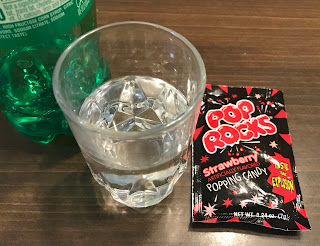 As they experienced the popping sensation in their mouths, I explained that it is caused as their saliva dissolves the candy and releases the trapped bubbles of compressed CO2 that were bubbled into the liquid candy and trapped as it cooled.

2. I then went on to tell them about the old urban legend that if you eat Pop Rocks with a soda, it will produce enough gas to make your stomach explode and kill you, and that we were now going to do an experiment and see if they believed that based on their observations, by pouring the Pop Rocks into the Sprite and observe how much gas is produced, indicated by bubbling.


3. We discussed what we observed, and they all correctly hypothesized that there was no way enough gas would be produced to cause someone's stomach to blow up. But it was cool to watch the the candy bubble and dance up and down in the soda, kind of like a Pop Rocks lava lamp. They could then drink it if they chose to.

We did a scaled-down, safer version of the now-popular experiment that results in copious amounts of foam being produced. The professional performers use more highly concentrated hydrogen peroxide than the 3% available at the supermarket or drugstore, sometimes as high as 30%, and potassium iodide as the catalyst. However, it is possible to do a safer version of it with lower concentrations of hydrogen peroxide and yeast to produce the enzyme catalase to drive the reaction.

Hydrogen peroxide can be purchased in 6%, 9%, and 12% solutions from beauty supply stores, labeled as "20, 30, or 40 volume CLEAR developer solution" (I have no idea what the numeric volume labels actually refer to). I would only use 3% or 6% for kids to actually handle and use themselves, but if you just want to demo, go for the 12% for greater impact!

1. I gave each participant a tray to catch all the foam that would be produced. For safety and time-saving, I pre-measured and dispensed 1/2 cup of 6% hydrogen peroxide into 16-ounce soft-drink bottles (you want a narrow opening) and placed one bottle in the center of each tray. You could save on materials by having kids work together in pairs.

2. Next, they each measured out 2 teaspoons yeast into a dixie cup, while I gave them each 3 tablespoons of warm water in another cup. When everyone was ready, I instructed them to pour the yeast into the water, and stir with the craft stick until smooth.

3. While the yeast proofed, they each added 1 tablespoon dish soap to their bottle and swirled to mix, then dripped food coloring in lines down the side of the bottle (this will create the toothpaste-like stripes of color).

4. When everyone was ready, we gave the yeast one last stir, and quickly poured it in and watched the foam errupt! They were able to feel the warmth of the foam to see that it was an exothermic reaction (with these small concentrations and volumes, the heat dissipates so quickly in the foam that it is safe to touch).

*Note: The size and shape of the bottle used will affect the results, as may the yeast and dish soap used, so plan on doing a trial run to see if the amounts need to be adjusted. The ideal bottle is a 16 ounce soft drink bottle with a tapered neck and narrow opening. Using a bottle even slightly larger, such as a 20 ounce soft drink bottle, will require adjustments. The dish soap I had at work was Ajax, but I don't think it worked quite as well as the (possibly more concentrated) Dawn I used in my trial run at home, shown below.


5. I also did a demo to show them what happens if you don't put the soap in (it bubbles, but doesn't create the dense foam or toothpaste effect), and monitored the temperature, which went from 69 degrees to about 140 degrees (the reaction actually heats to near the boiling point, but at these strengths and volumes, the heat dissipates quickly enough that the thermometer doesn't register the highest temperatures, though the liquid remaining in the bottle is VERY hot).


I then told them about the bombardier beetle, which uses a this same reaction to spray a hot, noxious fluid from its butt when disturbed, and showed them a video of a large scale experiment using large amounts of very concentrated hydrogen peroxide and powdered potassium iodide to create a huge explosion of foam and steam. While cool to watch, I explained it was actually very reckless and unsafe, and this teacher was very lucky none of the students were burned or otherwise hurt.

I realized a couple of days before the program that I had over-planned and we would not have time to do everything, so I changed this last activity to a take-home activity. I did a demonstration, and gave everyone the bottle-and-straw assembly and instructions to take home where they would provide their own baking soda and vinegar.

1. Drill or punch a hole in the lid to a 12-ounce plastic bottle (you can use a larger bottle, but will need to increase the amounts of vinegar and baking soda proportionately). 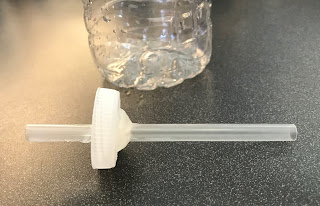 4. Place 2 teaspoons of baking soda on a small piece of paper toweling (about 3"x4") and roll/fold it up burrito-style, being sure the end is folded in so the soda cannot fall out, and that it will fit through the bottle opening.

5. While standing right next to a tub of water at least 4" deep, carefully insert the baking soda bundle into the bottle, quickly put the lid on and screw tightly shut, give a shake, and immediately place in the water. As the soda and vinegar react, carbon dioxide builds up and forces its way out through the straw, which propels the bottle forward. 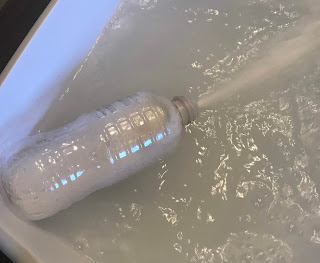 Even with changing the last activity to a take home activity, it still ran over a bit. Everything went well, it just took longer than expected. We had one minor mishap with the balloon inflation when one participant unknowingly made a small tear in the neck of her balloon when placing it on the bottle. When the reaction got going, it began spurting through the tear and making a bit of a mess, but it was more comical than anything.

I was a little disappointed that almost all of the kids had already experienced Pop Rocks before. I was really hoping the popping action would be a surprise.

The "Elephant's Toothpaste" was of course the biggest hit. I didn't tell them that's what we were doing, as I wanted it to be a surprise, but some of them had clearly already experienced it and figured it out. We did have one minor issue with the yeast getting really clumpy, which caused a couple of the reactions to not be as dramatic. In my trial runs, I used Fleischman's yeast in the individual packets, but when purchasing for the program I bought store-brand yeast in a jar since I needed such a large quantity, and I thought measuring out two spoonfuls would be easier and less messy than opening and emptying out packets (and it was). So I'm not sure if the yeast was different, or we used too much, or let it proof too long during the program, because my trial runs at home worked perfectly.

The bottle boats did not work quite as well as I'd hoped. They sputter and spray a lot, but it doesn't all contribute to propelling the bottle forward, certainly not as dramatically as I'd hoped. It does work, though, just not quite like I expected. There is another method where you put the straw through the bottom of the bottle, rather than the lid, and angle the straw down into the water which would probably work better, but is trickier to load without making a mess.

I think if I had it to do again, I'd break it into two separate programs; one with the simpler experiments about gasses, and one just about the "Elephant's Toothpaste" experiment, exploring all the variables to see what effect changing them has, and talking a little more about the reaction going on and how catalysts work, and the catalase enzyme.

Did you know catalase is related to aging? Almost all aerobic organisms produce it, and its purpose is to break down the reactive oxygen compounds, like hydrogen peroxide, that are normal by-products of metabolism but cause damage to the cell. Mice who produced twice the normal levels of catalase aged much slower than their counterparts. I wish I had a little extra catalase!

My biggest take-home message from this would be that while the elephant's toothpaste experiment is easy to do with readily available and safer materials, every little thing (amount and concentration of peroxide, amount and brand of soap used, amount and brand of yeast, amount and temp of water used to activate the yeast, proofing time for yeast, amount and placement of food color, and bottle size and shape) affects the outcome, so be sure to do trial runs with the EXACT materials you plan to use in the program to get the amounts and timing down for the best affect.
Posted by Jen at 1:56:00 PM