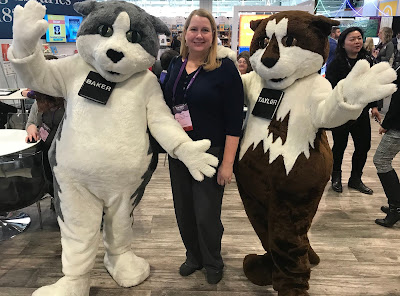 I have gone to a couple of small, local children's literature conferences before, but this was the first year I was able to go to a big library conference. I've been planning on going to this one for at least two years, once I realized it would be held in Nashville, which is only a 3-1/2 hour drive for me.

I have one word to describe it: Overwhelming! The conference center was huge, a bit confusing to navigate, and there were so many things going on at once it was hard to decide what to do! There were big keynote sessions each day, but they started at 8:00 am, so I opted to skip them in favor of more sleep. There were so many breakout sessions, and it's always hard to decide which ones to go to. The ones that sound most relevant to what I do usually aren't telling me anything I don't already know, the ones that sound interesting aren't really of much use to me because I am not in a position that has any power to make decisions or effect any change, some are of no interest, and others sound good, and turn out to be complete duds.

I was only able to go to a day and a half because of other obligations and the hotel was ridiculously expensive, but I crammed as many sessions in as I could. They were all a little different, but had two overarching themes in common: removing barriers to service, and being more intentional in designing programs and services, particularly outreach, to decrease equity and opportunity gaps. I really wish I could have stayed until the end, as there were some other sessions I really would have liked to attend, such as reader's advisory for LGTBQ+ patrons, and one about going fine-free, which is a something my system is beginning to investigate.

The vendor exhibit hall was enormous! I tried to walk through it a couple of times, but it was so huge and I was always pressed for time, so I didn't get very far and it was always overwhelming. I grabbed a few ARC's and a couple of little chachkies, but my manager got 4 or 5 times as many as I did! I did get a couple that were signed, but I wish I could have gotten a few more. I had a hard time being able to tell what were give-a-ways from what was for sale or just for display. I don't really have any extra time for reading right now anyway, so I guess it's for the best. But I did get a picture with the Baker&Taylor cats (above), who somehow I never knew about until now. 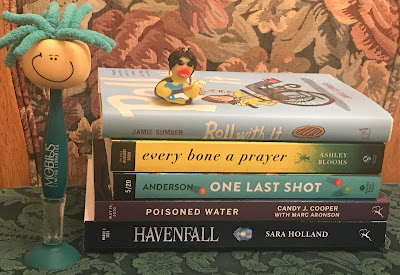 Besides the professional development, the conference provided a great opportunity to connect with people. I ran into a former co-worker from a few years back, I got to meet two of my professors from my online MLIS program in person, as well as a few other students, and one alum that I know from our student support group on Facebook. Plus just chatting with other random conference attendees.

If you get a chance, I highly recommend going to a big conference like this, but I have some tips I wish I knew before I went:

I'd really like to go to the ALSC conference sometime. It was actually only an 1-1/2 hours away from me in 2018, but I waited too late and registration closed well in advance of the conference (I never knew that was a thing; I guess it was a small venue with very limited capacity?). I also haven't been to our state conference yet, so that will probably be on my agenda next year.

Do any of you have any conference tips for newbies, or conferences to recommend? Any other first-time conference goers want to share your experience at PLA?
Posted by Jen at 1:47:00 PM