Ready for a Yeti? - Family Storytime

Last year I decided to give a slight twist to my "Snowman" storytime by having one story about the abominable snowman, or yeti, in addition to stories about traditional snowman. I realized that several cute picture books about yeti have come out in the last few years, and with Disney's release of the movie Abominable last year, I thought a "Yeti" storytime would be fun.

I started with greeting everyone and passing out program sheets with all the songs, and then we waved "hello" to each other and sang "Hello, My Friends, Hello", then warmed up with "Hello, Everybody". After that I introduced our topic and talked about what Yeti are, where they are from, and how they are also called "abominable snowmen". We sang this little song I found on You Tube, with some modification:

Who's the most famous monster
that history knows?
Who's tall, white, and furry
with big, stompy toes?

What's the scariest thing
that you ever did see?
It's the abominable beastie
we call the Yeti!

Then we led into our first story with a quick verse of our "Story Song": 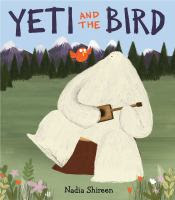 Yeti and the Bird by Nadia Shireen is a sweet story about friendship. Poor Yeti is sad and lonely because all the other animals are afraid of him, so he has no friends. Then one day a lost bird comes crashing into his life, literally. But unlike everyone else, Bird is not afraid of the Yeti, and they become great friends. Until winter comes and Bird must find her way to a warmer location. Yeti is sad, until he finds he has several new friends.

A very charming story about an unlikely friendship that teaches not to judge by appearances with rich illustrations that are neither stark nor too busy. 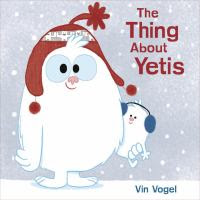 The kids were eager for the next story, so I went right to it: The Thing About Yetis by Vin Vogel. This story features a cute young Yeti and shows all the things he loves about winter: hot chocolate with marshmallows, sliding down hills, ice skating, building snow castles (then pretending to be Godzilla and knocking them down)...All of which he does accompanied by his favorite stuffie. But, the thing about Yetis is, even they can get tired of the cold and enjoy warm-weather fun as well. Kids will find this relate-able, sometimes funny (like when the Yeti's fur goes "poof" after getting wet), and the digital artwork charming.

Following this I asked them if Yeti's were real. Some said yes, some said no, some weren't sure. I explained that no one knew for sure. Some people believed they were real, and some said they had seen one, but no one had been able to prove it yet and that's why people kept hunting for them to try and get a clear photo or video. I told them now we were to pretend to go exploring and hunting for Yeti.

I simply adapted the traditional call-and-response chant, "Going On A Bear Hunt", by substituting Yeti and appropriate snow-covered, frozen topography.

Going On A Yeti Hunt

We're going on a Yeti hunt.
Gonna find a big one.
With great big feet,
And long white fur.

Look, it's a great, big snowfield!
Can't go around it,
Can't go under it,
Have to ski across it!
(pretend to ski)
Swoosh, swoosh, swoosh!

Look, it's a wide, frozen river!
Can't swim across it,
Can't go around it,
Have to skate across it!
(pretend to skate)
Glide, glide, glide!

Look, it's a great big mountain!
Can't go around it,
Can't go through it,
Have to climb up it!
(pretend to climb)
Climb, climb, climb!

Look, it's a deep, dark cave!
Just like where the Yeti lives.
Let's go in it!
(pretend to walk carefully)
Step, step, step.

Whoops, what is that?
I feel two great big feet!
And long, shaggy, fur!

[Say the rest quickly, without pausing for response while acting out the motions]

It's the Yeti! Run!  Run, run, run
Climb down the mountain!   Climb, climb, climb
Skate back across the river!  Glide, glide, glide
Ski across the snowfield!  Swoosh, swoosh, swoosh
Go back in the house, and shut the door!  Slam, lock


This was so much fun! I did have a third story picked out, Dear Yeti by James Kwan, but I decided since the other two were slightly longer than I realized, and people were starting to drift off, to skip it and go right to the final activity. 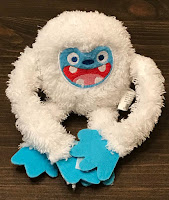 I told the kids that now we were going to go on a "real" Yeti hunt! We have a bunch of these little stuffed Yeti with velcro hands that a previous children's librarian had purchased (from Oriental Trading, but sadly no longer available), so before the library opened I hid them around the children's department. I told the kids that there were eight Yeti hiding, and they set off to find them.

Right before storytime started, I stuck one of the Yeti on my back, and I was sure they would spot it during storytime, but they never did. I was certain it would be the first one they found, but even though I kept walking around, they were so focused on looking in the shelves they never looked up, so it ended up being the last one they found. They all had a good time, and I think everyone that hung around and participated was able to find one.

Overall, it went very well. I started out with a big crowd, but as I've just come to accept is typical for the weekend storytime, many drifted off during the course of the storytime, but there were still a decent number that stayed until the very end, and they enjoyed the stories, and both the "Yeti Hunt" chant, and the Yeti hunt activity.

Most of the time people seem to big a big hurry to leave and are uninterested in the after-storytime activity, particularly crafts. Ironically, the time I didn't plan a craft and cut storytime a little short, someone actually asked if we were having any other activities.