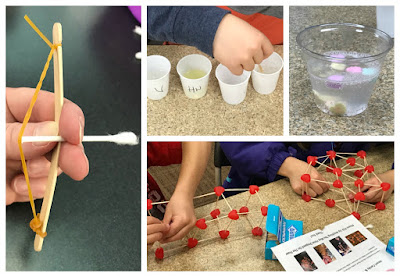 What is "Valentine's Day Science"? Well, it's what you put on the calendar when you still have no idea what you want to do for your February program by the deadline, and then you figure it out later! 😂 In this case, it was several activities that were tweaked to tie them in with Valentine's Day, but could easily be adapted to do anytime.

Prep - I used a box cutter to very carefully cut notches at each end of the craft sticks in advance, and put them in hot water to soak an hour before the program to make them more flexible, them removed and quickly blotted dry before passing out.

1. I gave each participant a craft stick that had already been notched and soaked in hot water to soften, a rubber band, two cotton swabs, and a pair of scissors, then instructed them to make a single cut in the rubber band, and to cut or break off one end of each cotton swab.

2. Next, they were instructed to VERY carefully bend the craft stick slightly. They need to do this slowly and gently, and of course there were some who ignored that instruction and bent them too hard and broke them, so be sure to have extras on hand. 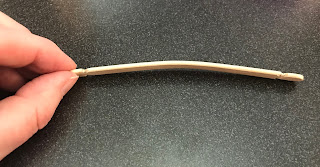 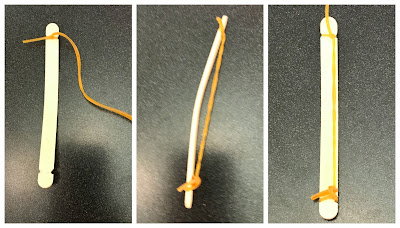 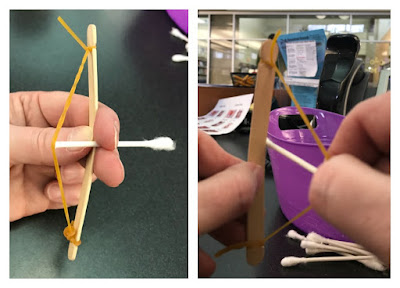 5. Line your arrow up, pull the arrow back with the bowstring, and try to shoot it through the heart target! (This proved to be more challenging that the catapults we made back in the fall, but one boy did manage to get an arrow through the heart.)

1. Each participant was given a set of solutions in small cups: cold water, hot water, vinegar, and clear soda; plus a cup with 10-12 conversation hearts. They were instructed to add one heart to each cup to see which would dissolve the fastest. 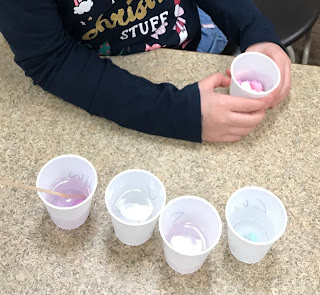 2. As they were doing this, they were encouraged to make predictions, and explain why.

3. While we waited for the hearts to start dissolving, each child was given a larger cup of clear soda and told to add the remaining conversation hearts to it and watch them dance! We observed how they will first drop to the bottom, then float up to the top, then drop down again, and back up. I asked them to explain what they were observing, and most knew it had to do with the carbonation in the soda and the bubbles, but couldn't identify the gas in the bubbles as CO2 . 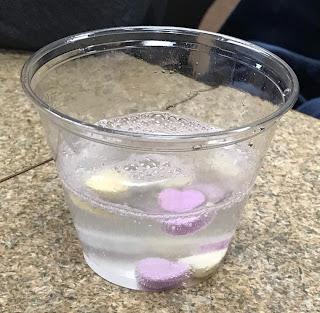 4. We made a final observation of our dissolution comparison, and all agreed that the hot water dissolved the most/fastest, then quickly cleaned up to allow plenty of room for our last activity.

1. Each participant was given 1 bag of Ju-Ju hearts and 1 box of flat toothpicks [I realized later that was way too many toothpicks, and more candy than most ended up using, so a lot was wasted. I would suggest 1 bag for every two kids, with a couple extra for those who need more, and 1 box of toothpicks for every 3-4 kids is more than enough.]

These particular candies worked really well as they do not have sugar crystals on the surface to make a big mess and do not get sticky when handling like jelly hearts do. I like using the flat toothpicks because they tend to "grip" better and not allow as much movement as the round toothpicks, plus they are cheaper.

2. They were shown a few pictures of examples, and reminded that they needed to be sure that they had a stable, strong base before they tried to build up, and encouraged to use their imaginations and build whatever they wanted, and they could work together if they chose.

How It Went
So, what do you do when you get sick and lose your voice on the day of a program? Besides panic? First you type up step-by-step instructions with pictures to pass out, and you gratefully accept when a coworker kindly offers to be your voice!

I'd had a cold that caused me to lose my voice and cough excessively at night so that I'd not had any sleep for several days, so doing this program proved to be quite a challenge, and I was so thankful my coworkers were quick to offer to arrange desk coverage so one of them could be my voice to give instructions. I could talk quietly one-on-one, but not to a whole crowd.

Overall, it went pretty well. The mini-bow and arrow proved to be more difficult for them, and much more challenging to hit a target than the mini catapults we made in November. I was a little disappointed that no one really tried to make a really large, tall structure with the building challenge, most were content to make one or more small structures, and one little boy did something I hadn't thought about, and made letters to spell out his name, which would be a great literacy activity to do.

Just as I did when we used candy pumpkins for our catapults, I instructed them not to eat any of the candy we were using in our activities, but told them I had candy set aside for eating that they could have at the end if it was okay with their grownup.

What I Would Do Differently
The main thing I would do differently is buy less candy and toothpicks. Most of the kids only used about half of their candy hearts and a tiny fraction of the toothpicks. One half of a bag each would have been enough for almost everybody.

And since the mini bow and arrow seemed too challenging and frustrating for many of them, I'd probably skip that, and spend more time on the building challenge, adding some directed building, like can you build a cube, can you build a pyramid, can you make a heart, can you make your name, then letting them free-build. I think I'm still trying to cram too much into each program, and I need to cut back a little and spend more time on each activity.