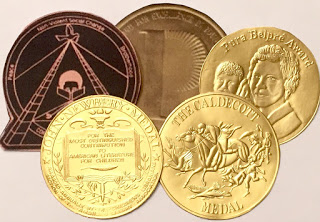 Time for my annual reflection on the Youth Media Awards! Every year I am surprised by the winners, and find that no matter how much I try to read and pay attention to what people are talking about, I am unfamiliar with many of them. I tried to make predictions one year, but found it was an exercise in futility; it is just too subjective and the committees and I are rarely on the same wavelength. So I am happy if I have at least read some of the winners and honor books, or at least had them on my radar. 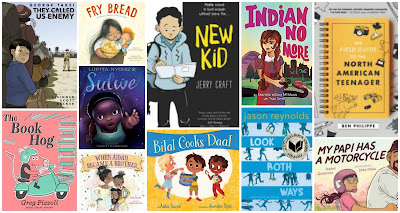 I really didn't expect to fare very well this time around, since I took two literature classes in 2019 and spent most of my time reading assigned books and had less time to read new books, but I was pleasantly surprised! I had already read New Kid by Jerry Craft, which won both the Newbery and the Coretta Scott King author awards. That's the second year in a row I had actually already read the Newbery winner. I had also read Morris Winner Field Guide to the North American Teenager by Ben Philippe, American Indian Youth Literature Award middle-grade winner Indian No More by Charlene Willing McManis, and Asian/Pacific American Award YA winner, They Called Us Enemy by George Takei, and remembered seeing several of the picture books that won honors: Fry Bread, Sulwe, My Papi Has a Motorcycle, Bilal Cooks Daal, The Book Hog, and When Aidan Became a Brother. Though I hadn't had a chance to read it yet, Jason Reynolds' Look Both Ways was on my mental "to-read" list.

I had a pretty good feeling that New Kid would would be somewhere in the mix, and I thought Indian No More would likely be honored by the American Indian Youth Literature award, but I was very pleasantly surprised when Field Guide to the North American Teenager was announced as a Morris finalist. I read it when we first got it at the library, and loved Norris' snark and sarcasm, and told my supervisor she had to read it, as she is fluent in sarcasm as well. I was certainly not surprised to see Jason Reynolds win more honors, but I was a bit surprised that out of all the middle-grade LGTBQ+ books I read, none were honored. I really thought Zenobia July might be one of the Stonewall honor books. 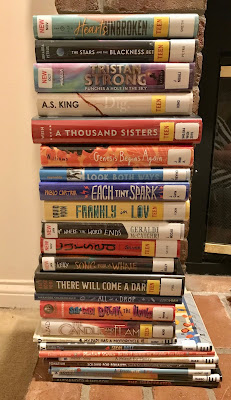 But there were still plenty of winners and honor books that I had not read or even heard of, so I was placing holds as fast as the awards were announced, and now my "to read" pile is huge! I've made a small dent in it, but have a ways to go. I try to read all the winners, and as many of the honor books as I can. To be honest, I don't put a lot of stock in the awards, but I know others do and many will appear on summer reading lists, so I want to be familiar with them.

Personally, I think the awards are too subjective to be meaningful because lots of great books don't even get considered and committees often tend to choose books that adults think kids should read, rather than books that actually appeal to kids. I've seen many an award winner or honor book languish on the shelves, virtually untouched once all the teachers and librarians have finished looking at them following the awards. I care more about books that kids will want to read.

I have found that I generally like the Coretta Scott King, Pura Bel Pre, and Stonewall winners and honor books more than the Caldecott or Newbery. Also, I have found that winning multiple honors is more of a true indication that a book is one of the best books published that year, and those get my attention first. Then I look at the Caldecott winner and honor books, the Newbery winner, and the Printz winner. From there, I read as many of the other medal winners as I can, then go back and read the Newbery, Printz, CSK, and Morris honors, then as many of the remaining honor books as I can. It usually takes me about 3-6 months to get thru it all!

So here are the ones that stand out because of winning multiple honors, and what I think of them: 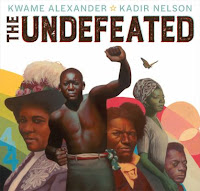 With such an amazingly talented creative team as this, how could this book not win multiple honors recognizing both the illustration and the written words? This is such a moving book, showing the triumphs, struggles, and achievements of African Americans throughout history with Kadir Nelson's amazing photo-realistic illustrations and Kwame Alexander's poetry. The blank page depicting those that did not survive is very impactful, and I love all the endnotes that identify the people depicted and tell a little more about the events surrounding them. I can definitely see why it was selected for all the honors it received without question.

I read this book right after it came out and loved it! It's about an African-American boy trying to fit in at a new school full of mostly privileged kids, make friends, and dealing with racism and classism. A really good book, and significant because it is the first graphic novel to win the Newbery award, and one of few books by POC to win.

Very impressive honors for a debut author! This book was so good, but also so heartbreaking as we watch Genesis deal with having to move constantly, always on the verge of homelessness because of her father's alcoholism and gambling, plus her own self-loathing because of her dark skin and nappy hair (her words), which drives her to risk self-mutilation in her desperate attempts to lighten her skin and straighten her hair to look more like her mother, who has lighter skin and "good" hair so that her father and everyone else will think she's pretty. This is a book that should be discussed, to be sure young readers don't internalize Genesis' insecurities and self-hatred, but instead see the bigger lesson in embracing your own unique beauty as well as that of others.

This memoir told in free verse is a fairly quick, but difficult read. Grimes reflects on her difficult childhood, as much of it as she can remember, growing up with a mother who was an alcoholic, schizophrenic, and emotionally distant. She describes being separated from her sister and living in foster care, suffering sexual abuse at the hands of her mother's second husband, and losing her beloved father. She explains how she has gaping holes in her memory, which is typical of those suffering trauma. This one is even more moving and heartbreaking than Genesis because it really happened.

Frankly in Love by David Yoon

Frank Li has a problem. His best friend is black, his girlfriend is white, and his Korean parents are racist, but don't think that they are. They have already disowned his older sister for marrying a black man, so what is Frank to do? Pretend to date the nice Korean girl his parents have picked out for him, who is also hiding her non-Korean boyfriend from her parents. This book was an enjoyable read, and delves into multiple levels of racism and classism. I did find it very predictable, but that didn't prevent me from enjoying the story.

The Beast Player by Nahoko Uehashi

I found this to be a fairly typical YA epic fantasy, with a human protagonist that bonds with a magical flying beast, caught amid political intrigue and threats of war. Though I didn't find the story to be particularly original or creative, it was a well-written and enjoyable story, and a thought-provoking commentary on man's relationship with animals and nature, and the consequences of interference.

One thing that really stood out to me was the diversity in this year's awards. Looking back over my list of books that won multiple honors, I realized they were all written and illustrated by authors of color writing their own voices, which I am so happy to see!

So how did you fare this year? Had you read many of the books honored? Did any of your favorites win? What surprised or disappointed you the most?

Need more info about the YMA's?