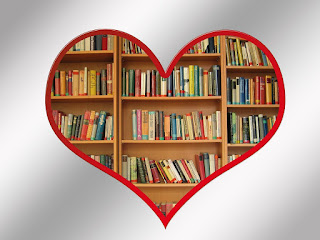 February is Library Lovers Month, which I celebrated with this surprisingly popular passive program (or shameless ploy to solicit compliments, you decide 😉).

I had a great idea for a passive program, inspired by a couple of things. One day some time ago, one of our young regulars handed me several pieces of scrap paper covered with lines of cursive-like scribbles which his mother translated for me as saying "I love the library" and "I love the librarian", which I of course saved with all my other treasures kids have given me:

Then, some time later, someone had put out a box of stuff at work they wanted to get rid of, and one of the items in it was a small cardboard mailbox covered with hearts like kids use for Valentine's day, and that got me to thinking about how great it would be to set up a station for kids to write love letters to the library telling us what they love about it in February.

I remembered we had a toy mailbox tucked away, so I got it out and added a few stickers to jazz it up and look more Valentine-y. Then I made some stationary and set it all out on a table with some pencils, a few crayons, and a sign inviting them to write or draw to tell us what they love about the library. 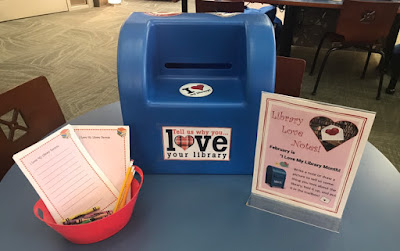 The response was overwhelming! Our young patrons REALLY love the library, and REALLY wanted to tell us why! I set it up on Saturday afternoon, and by the end of Sunday afternoon there were already just shy of 50 responses. In fact, they wanted to tell us why they loved the library so much, that when the stationary temporarily ran out, they got creative in finding their own paper, using receipts, coloring pages, and scrap paper. 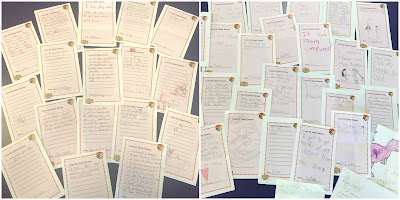 I was amazed at the response, and how excited some of the kids were to do it. I think the mailbox really helped sell it, as we've never had such a large response to any similar activities before. I had originally just planned on putting them up in the department, but there were so many our floor manager suggested I put them up on the humongous 20" corkboard they just had installed in the main library. So I started with this:

And I still had quite a few left over that I didn't have room for. I had originally intended to leave it up for at least a couple of weeks, but ended up stopping after 8 days and 200+ responses, because I figured at that point we were getting a lot of multiple responses from the same kids and wasting paper.

Of course many of them mentioned all the books, some even mentioning specific types, titles, or series, and the fact they could chose their own; but some of the other things they loved were the trains, dramatic play area, and other toys; computers, coloring sheets, dry erase tables, scavenger hunts, storytime, playing with friends, making new friends, reading with mom/dad, programs, games, stickers, being able to place holds, being able to check out more than 2 books (one was very indignant that even as a 5th grader, their school library only lets them check out 2 books), and movies.

But what I loved seeing the most was how many mentioned the friendly, nice, and helpful people that work at the library and help them find things. The two full-time children's librarians even got mentioned by name, but I claim credit for the one that mentioned "experiments" since I do most of the STEM programs.

Here are some particular quotes that stood out:

"If we didn't have books we wouldn't know anything."

"The librarians are all really nice, and it just rocks in general."

Of course when you do something like this you always run the risk of someone being a jerk and saying something nasty, and we did get a couple of those, but considering it was only 3 out of 200+, I think that was pretty good.

Of course I can't close without saying some of the things I love about my library. I have to say I truly enjoy being at work most of the time. We have a wonderfully diverse community with a strong reading culture that is very supportive and appreciative and I love building relationships with our patrons, I have great coworkers and we all get along well and complement each other, I am able to do a little bit of everything and put all my varied interests and experiences to use, and I'm proud of the large and diverse collection we have and all the programs and services we offer.