At first I wasn't sure about doing a Christmas storytime, having previously worked in a very diverse, multinational community with a wide array of ethnicities, cultures, and religions where we did not do Christmas programs. However, the library and community where I work now is very different and Christmas celebrations and programs are the norm. There was a wide array of non-Christmas programs available as well, and I made sure the theme was announced in advance so those who preferred to opt out could do so. But with storytime falling just two days before Christmas, and knowing so many in our already economically depressed community have had even more hardship due to the pandemic, I really felt a cheery Christmas storytime would best serve this particular community at this time, plus my manager had requested some type of Christmas program.

(I know this is a very divisive topic in our profession, and I have discussed my thoughts and opinions on the matter in previous articles, here and here, so I prefer not to debate the issue on this post.)

I started with a short welcome song, and introduced the question "we know Santa uses reindeer to pull his sleigh, but did you ever wonder if he ever tried any other animals?" and told them our first story would answer that question, which I led into with my usual "story song". 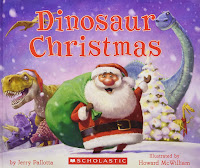 I was SO excited when I happened upon this first book in the stacks, which gave me another opportunity to incorporate my favorite topic, dinosaurs! Though dinosaurs and Santa may seem like an unlikely pairing (but maybe not considering all the ugly Christmas sweaters featuring dinos), it works well in Jerry Pallotta and Howard McWilliam's Dinosaur Christmas, and dinosaurs are always an appropriate theme in this state, which has numerous dinosaur trackways and fossil sites, even a town named Dinosaur! The story begins with a little girl writing a note to Santa, posing the question of what he used to pull his sleigh before he had reindeer? Santa answers, describing how he once used dinosaurs to pull his sleigh! He tells of all the various kinds of dinosaurs he tried, and the pros and cons of each. Very cute, and sure to delight all the budding paleontologists and dinosaur aficionados out there.

The story ends back with the reindeer, which gave a perfect lead-in for a fun flannel rhyme starring that most famous reindeer of all, Rudolph! I revealed my flannel board with Rudolph's face (missing the characteristic red nose), and reacted to my assumed audience's imagined objection that it couldn't be Rudolph because it had an ordinary black nose, saying the first verse of the rhyme "Rudolph, Rudolph, Santa has his sack, but you're not ready if your nose is black!" then suggesting we work on our colors and rhyming words and help Rudolph fix his nose.

(I made the flannel using a pattern provided by Library Quine and found the poem from Crafty Chic Mommy, though I changed the order a little and skipped the green because I was using green screen to make a Christmas-y background).

Rudolph, Rudolph, what will you do?
You can't guide Santa's sleigh if your nose is BLUE.

Rudolph, Rudolph, the children are in bed.
And now you can get on your way because your nose is RED!
I've always had so much fun with this flannel in the past, really hamming it up and trying to convince the kids that each color would do for one reason or another, and of course they always insist they just won't work and we have to keep trying. Being virtual, it of course wasn't the same, but I reacted as though the viewing audience were making all the typical comments I'd heard from kids in the past. Of course once Rudolph had his proper red nose, we had to sing "Rudolph, the Red-Nosed Reindeer". 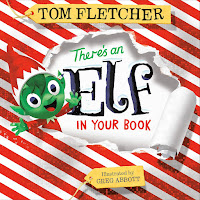 I transitioned to our next story by commenting on how reindeer are Santa's helpers, and now we were going to have a story about one of Santa's other helpers, an elf! I LOVE Tom Fletcher and Greg Abbott's series for how fun and interactive they are, and There's an Elf in Your Book! lived up to my expectations. The illustrations are cute, it's highly interactive, and funny. The premise is that Elf must give us the "nice or naughty" test to help Santa with the list. In the vein of "Simon Says", Elf prompts the reader/audience to do or say different things, but you have to be careful not to be tricked into doing something naughty, like saying "I'm a wisenheimer sparkle-butt!" or you'll end up on the naughty list!
I then commented that while we know elves can be very mischievous, the reindeer can be mischievous, too, as we would see in our second flannel, which starts with cookies left out on a plate for Santa: 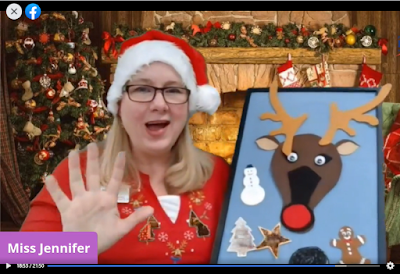 Five Little Cookies
Five little cookies, sitting on a plate.
Waiting for Santa, but he was running late.
Along came Rudolph, and guess what he ate?
The _______ cookie, sitting on a plate.
(fill in with color, shape, or type of cookie, repeat until all cookies are gone)
No little cookies sitting on the plate,
Because that's what Rudolph the Reindeer ate!
The original poem just said "a reindeer", but I said Rudolph since I already had him on the flannel board. Next time I think I will add 5 more cookies, and say a different reindeer each time, and end with Santa getting the last cookie. The original poem also just said "one little cookie", but I like to add concepts of color, shape, etc., whenever possible.
I closed with a good-by song and announcements about holiday closures and reminders about our digital resources and curbside services.
How It Went
Again, it's really hard to judge. As always, I'm not thrilled with my performance and feel like I am not as natural and engaging on camera as I am in person with a real audience, but I do feel like I am gradually getting better each time as I get more used to doing it them.

I played around with using the green screen for the first time, since the only space I have to film in is our boring blah meeting room in the basement, with artificial light and bland grayish-white walls that do not provide a flattering background, and I thought it would be nice to have a cozy, Christmas background. However, though I loved being able to add a background of my choosing, I found it just didn't work that well for storytime for a few reasons. One, having to try to minimize green in my clothing, props, and illustrations, which is difficult, so some things ended up looking really weird, and it had issues with white as well. Two, it did not handle all the movement well at all, making my hands very blurry with a trailing greenish haze anytime I moved them. Three, I could not get the setting just right, so that there was a slight green halo-effect around me all the time.

So, I think I'm going to have to go low-tech for a background, and I still need to work on getting it shorter and being a little faster and more energetic. Again, only getting a few views (and who knows if they're real views, or just someone quickly clicking in and out), and no comments, despite practically begging! I encourage them to comment to let me know who's watching so I can say hello to them, asked them they're favorite dinosaurs, and other prompts, but nothing.
I know it's still a ways off, but I cannot wait to do in-person programming again!
Posted by Jen at 3:03:00 PM