I guess I always do some kind of snow-themed storytime in January, but I was able to come up with two books I had not used before, so it's somewhat original. The weather is very unpredictable where I am now, for example a week after I arrived here in October a big storm dropped temperatures and 8"-12" of snow on us, after being sunny and 75 the week before, and after a few days almost all traces of snow were gone. I've been told they've had blizzards pop up as late as May, or even in the summer! 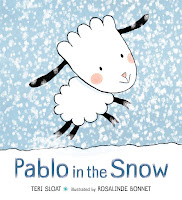 I started with a hello song, introduction, and lead-in song, then read the first book, Pablo In The Snow, by Terri Sloat and Rosalinde Bonnet. A little lamb named Pablo has never seen snow before, and is amazed when "pieces of the clouds" start falling down. He goes outside to explore and discovers lots of fun things to do in the snow. But he stays out a little too long and can't find his way home as new snow has covered all of the tracks.

I chose this book for a few reasons: it shows several snowy day activities, it was a newer book and I had not seen or used it before, and my branch happens to have "Lamb" in its name. I also used it as a reminder that if you get lost or separated from your group, you should stay put and call for help.

Next we counted out ten snowflakes as I put them on my flannel board, and then sang the following while counting on our fingers: 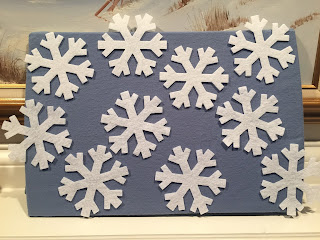 The Snowman & The Rabbit 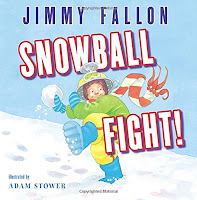 Then I read one more book, Snowball Fight! by comedian Jimmy Fallon and illustrated by Adam Stower. I was surprised when I came across this book as I had never heard that Jimmy Fallon had ever written a children's book. It is a bit older, 2005, which is probably why I wasn't familiar with it. Though I am generally VERY skeptical about celebrity authors, this turned out to be a really great, fun storytime book. It has very little text and lots of action as the neighborhood kids gather for an epic snowball fight. It ends with the protagonist sneaking out and making one last snowball and storing it in the freezer for "future use!", which is something my brother and I always did as well.
I closed with a goodbye song and the usual reminders about take & make kits, digital resources, and curbside services.
How It Went??
Again, it's hard to say. I am getting more comfortable with our set-up and being live, and I liked the books I chose, but I am still ending up at 20 minutes, which I feel is too long. I am seriously thinking of eliminating the additional songs and fingerplays, because I don't feel that translates as well to a virtual storytime, and that people are likely more interested in the books.

Once again, I am not getting tons of views and I don't know how many of those "views" really indicate someone watched a significant portion of the storytime or just clicked through it, and I don't have access to any additional information Facebook provides to the administrators, only what it shows to the public. Our branch's page only has like 400 followers, so I wouldn't expect many views, but I would like to know if *anyone* is really watching. I may get a couple of "likes" from patrons, but thus far no comments.
I gave the green screen another try, and was much happier with how it worked this time. I do wish we had better a better quality camera with higher resolution; I think the poor resolution also makes it more difficult to engage viewers. Honestly, the videos I did on my own at home over the summer with my phone and natural light looked much better, imo. Here is a screenshot from the video (I choose not to link to or embed the videos I do for work in my blog as I want to maintain a separation between my employer and my professional activities as an individual): 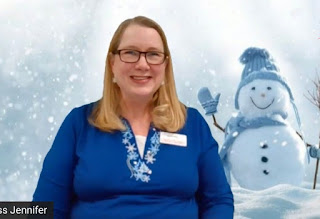 I don't expect to return to normal, in-person programming until maybe the Fall (though I expect to be told to do outdoor in-person programming before that), so I will keep offering the virtual storytimes and early literacy kits for the time being and hope I start to pick up some viewers and re-evaluate in a month or two. Of course, I appreciate any and all suggestions for making virtual storytime more engaging and/or attracting viewers!
Posted by Jen at 11:09:00 AM