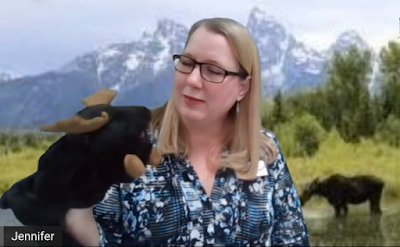 I've had a "moose" themed storytime in the back of my mind for over a year, since back in the before-times when I noticed that there were several cute picture books with moose. Then the pandemic hit, lost my job, yada yada yada, and now I'm in Colorado, which made the theme even more fitting since there are moose here.

One thing I've been working on lately is incorporating puppets into storytime, which is something I just haven't done much. I'm not sure why exactly, I guess it's slightly out of my comfort zone, but mainly I just don't think about it. But I remembered we had a cute moose puppet and used it to introduce the topic and welcome everyone to storytime with a "hello" song and our lead-in song. 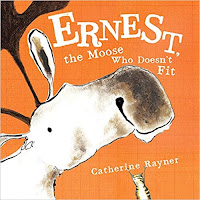 The first book I read is an old favorite that I've used before, Ernest: The Moose Who Doesn't Fit by Catherine Raynor.

This is a great storytime book as it is short with little text, but cute and slightly humorous as poor Ernest tries to fit into our book, but no matter how he shimmies, squeezes, and squishes, he just doesn't fit. Until his little chipmunk friend has an idea, that is. Kids love the big fold out page at the end, and they get a sense of just how big moose really are!

I followed that with a counting up rhyme, that originally came from the Harris County Public Library storytime files (which unfortunately have since been removed), but I saw on the Door2Door Librarian blog, accompanied by clipart moose on my magnetic board (sorry for the crappy pictures; I forgot to take them and had to resort to screenshots from the video): 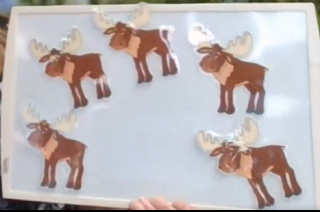 Five sleepy moose were on a great big hill.

So they pulled up the covers, and they all said "Goodnight!"
And the five sleepy moose were out like a light!

This would be a great rhyme to use in a bedtime-themed or evening storytime, and could be adapted for any character. 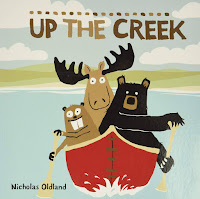 The second book I read was Up the Creek by Nicholas Outland, which is part of a series of at least seven books called Life In the Wild, featuring three animal friends: a bear, a moose, and a beaver.

In this story the three friends decide to go canoeing, but learn the hard way that they must compromise and work together in order to avoid mishaps and disasters. The story is cute, humorous, but also provides a lesson in cooperation, and an opportunity to learn some nautical terminology (stern, bow, port, and starboard).

I segued into the final activity, a counting down rhyme with a moose eating muffins that I also found on the Door2Door Librarian (though I changed it from ten to five, due to time), by mentioning Laura Numeroff's book, If You Give Moose a Muffin, as a book they might want to check out and evidence that moose do like muffins! I again used laminated pictures on my magnetic board to accompany the rhyme, along with the moose puppet to eat them. 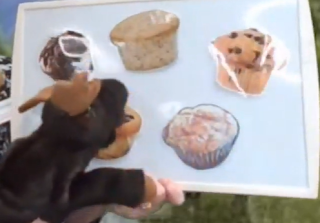 Four big muffins......
(repeat until all are gone)

No more muffins on the window sill!

For this one, I printed out photos of different types of muffins rather than clipart (and made myself quite hungry in the process!), so we could also talk about our favorite kinds of muffins.

I showed the moose craft from this month's early literacy kit, made using the child's footprint for the face and handprints for the antler's, and also made the suggestion of attaching handprint antlers to a headband so they could pretend to be a moose and act out the stories.

I ended with a teaser about next week's storytime, announcement of the library's reopening, and reminder that take-home kits and curbside pick-up will still be available, and a closing song.

I had a lot of fun with this storytime, though it did end up on the longer side. I have no doubt that it would have been a big hit in-person, but with virtual it's so hard to tell. I get some views, but no comments and rarely any "likes" other than from coworkers, so I really have no idea if anyone is really watching. I ask for comments, let me know who is watching so I can say hello, tell me what your favorite muffin is, have you ever seen a moose in the wild, etc., but nothing. It's really discouraging.