I've been doing storytimes for over six years, but this was the first time I attempted a Black History Month storytime. I've never really thought it was really a topic that lent itself well to a 20-minute storytime for preschoolers and/or toddlers, and to be honest, I was a bit intimidated by the idea of trying.

But this year I really felt compelled to find a way to observe it somehow. I thought about it quite a lot, and looked at a number of books, and again concluded that it really wasn't a topic that lent itself well to storytime, partly because of the breadth, complexity, and seriousness of the topic, and also because there really were no books that would work as they were all written for an older audience and quite text heavy.

So I decided rather than trying to do a literal interpretation, I would make it more of an homage by featuring books with Black authors and/or illustrators and songs/rhymes that I could somehow tie to Black inventors and scientists. But even then I had difficulty finding picture books that would make good storytime books. In general, it doesn't seem there are many African American picture book authors, though there are several illustrators. I eventually settled on two that I thought were suited for storytime, and also had a secondary theme of "basic concepts" to help connect them, since one focuses on colors, and the other on shapes.
I started with the usual "Hello" song, and introduced the topic, saying we were going to be honoring Black History Month by featuring award-winning books written and/or illustrated by Black writers and artists, and songs/rhymes inspired by Black scientists and inventors. I told them our first book was about a train, and I knew a silly song about a train we could sing first to warm up:
Peanut Butter
A peanut sat on a railroad track,
his heart was all a-flutter.
Around the bend came number 10,
Toot! Toot! SQUISH
Peanut butter!
I used this to create an opportunity to talk a little bit about George Washington Carver, the first African American to earn a Bachelor's degree (in agriculture), and though he didn't invent peanut butter, he did do a lot of research to find the best ways to grow peanuts and other ways to use peanuts (and sweet potatoes and soybeans as well) to help promote the agricultural economy in the south. 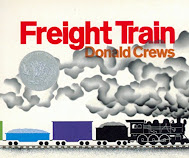 Then I read Freight Train by Donald Crews, a classic toddler storytime book which uses sparse text to describe all the different cars on a freight train and its journey along the track. Each car is a different color of the rainbow: red caboose, orange tanker, yellow hopper car, green cattle car, blue gondola car, and purple box car, all pulled by the black steam locomotive.

I transitioned from the colors of the train cars to the colors of a traffic light, with this song:
Twinkle, Twinkle Traffic Light
Twinkle, twinkle traffic light,
On the corner shining bright.
Red means "Stop",
Green means "Go".
Yellow means "Drive very slow."
Twinkle, twinkle traffic light.
On the corner shining bright.
Then I talked about Garrett Morgan and how he first came up with the idea of a warning signal to let drivers know the light was about to turn red, and showed a picture of him, and the traffic signal he patented. I also mentioned that he invented the precursor to the gas mask, and with these two inventions alone he saved many lives. I returned to the picture of a modern traffic light and pointed out the round shape of the individual lights, and the rectangular shape of the whole signal to segue into the second book. 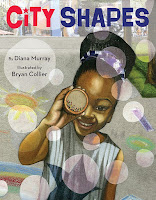 City Shapes, illustrated by Bryan Collier ( and written by Diana Murray) is a lovely book that takes a sometimes rather dull subject and turns it into a work of art. Concept books can sometimes be so dry and boring, but Diana Murray's rhythmic, flowing text makes it a fun read as we follow a pigeon through the city, spotting all kinds of shapes along the way, and Bryan Collier's award-winning artwork makes it a visual joy.
One of the pages towards the end of the book shows stars in the night sky, and I went back to it as a way to transition to talking about Katherine Johnson, Dorothy Vaughn, Mary Jackson, Christine Darden and all the other African American women who worked as mathematicians and engineers in the early days of the space program (I meant to mention astronauts Guion Bluford and Mae Jemison as well, but somehow forgot), which of course led to singing a song about going to the moon that would include a final concept, counting down from 10-1.
Zoom, Zoom, Zoom
Zoom, zoom, zoom,
We're going to the moon.
Zoom, zoom, zoom,
We're going to the moon.

If you want to take a trip,
Climb aboard my rocket ship.
Zoom, zoom, zoom,
We're going to the moon.
In 10-9-8-7-6-5-4-3-2-1-
BLAST OFF!!
I closed by encouraging the audience to come by to check out our many other books about Black history, and showed a few I had selected, representing multiple facets of Black history. So often when it comes to Black History Month people focus only on slavery and civil rights, showing only the darker history and struggle, instead of also celebrating the culture, accomplishments, and joy. I pulled a few books off of our display to show:
How It Went
Overall, I was fairly pleased with my approach and what I ended up doing, though some of my transitions felt just a little rough as I didn't have as much time to prepare as I'd like, and was unable to do even a quick run-through in my head before presenting it, which I really prefer to do, especially when doing something I haven't done before. But the last two months have been unbelievably chaotic as our manager left, we are understaffed, two people were out with Covid, then I lost a lot of time due to multiple snow delays, a closure due to plumbing issues, staff day, and a holiday closure. I am really hoping now we have our new manager and winter is about over that things will settle down and I won't feel like I'm perpetually behind!
I did get a decent number of views, and I think I honored the topic while still maintaining an age-appropriate and engaging storytime, and giving parents a jumping-off point for further reading and discussion at home.
Posted by Jen at 4:45:00 PM