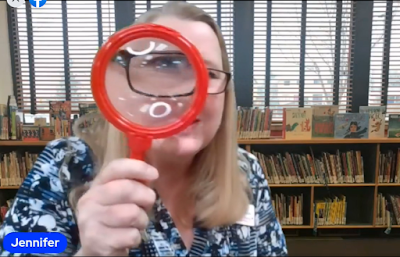 After the "Hello" song, I explained that today we were going to be detectives and solve a mystery. After defining what a mystery was, I discussed how detectives solved mysteries and some of the tools they might use, including their eyes and observation skills, a magnifying glass to look at small clues like fingerprints, a notebook to record clues, observations, information, and witness statements; and a camera to photograph clues. Then I lead in to reading the book with our "story song". 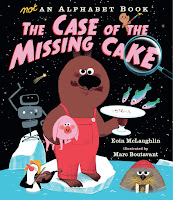 The Case of the Missing Cake by Eoin McLaughlin and Marc Boutavant is probably the most fun alphabet book I've ever come across, and the only one likely to hold an audience's attention from A to Z. I absolutely love this book! Though it started out as a typical alphabet book, A is for Apple, B is for Bear, C is for cake; it turned into a crime story after the cake on page 5 mysteriously disappeared!
But Bear is on the case, taking us through the entire alphabet as he investigates the crime and apprehends a suspect. But, has the suspect been falsely accused? Who really stole the cake? The observant reader will have noticed the clues throughout the story, leading to the not-so-surprising plot twist.

Though this is a longer story and a bit more text-heavy than what I typically read in storytime, it is so filled with drama and the opportunity to use different voices and read with a lot of expression, I feel that I would hold the attention of all but the youngest kids. It would be perfect for ages 5-8. I encouraged the audience to keep an eye out for clues, and to let me know when they spotted one and if they thought they had solved the mystery.
Since this was an alphabet book, I followed with singing the ABC song. I pointed out that the tune we typically use for the ABCs is the same tune as "Twinkle, Twinkle Little Star", which typically blows peoples' minds. I then told them that the ABCs can actually be sung to the tunes of several different traditional children's songs, such as "Mary Had a Little Lamb", "This Old Man", "London Bridges", "Row, Row, Row Your Boat", and "Head, Shoulders, Knees, and Toes", and that it's good to vary the tune because they each break up and emphasize different letters in different ways.
For example, the traditional tune tends to go thru the letters "L-M-N-O-P" quickly, and squishes them all together so that children don't really hear or realize the distinct letters, but the other tunes break them up more so they are sung and heard distinctly. By using less traditional tunes, children have to focus and think a little more about what they are singing, rather that relying on muscle memory. So then I sang the ABC's again, but to the tune of "Mary Had a Little Lamb".
Finally, I closed with announcements and reminders, then a good-bye song.
How It Went
If this had been an in-person storytime or an outreach visit, I am certain it would have been phenomenal. This book was so much fun to read, and would be great to pair with a mystery-solving activity that would have the kids searching the children's area or classroom for clues.

As it was virtual, it of course just wasn't the same. While I still had fun with the book, it would have been even better with audience participation and feedback. As always, I asked grown-ups at the beginning to let me know who was watching so I could say hello to them, but no one did. I prompted them at the beginning and throughout the story to tell me if they spotted a clue or thought they had solved the case, but the only comment was from a colleague.

I really don't think any kids are watching these virtual storytimes, despite the number of views Facebook says I'm getting; I think it's mostly adults watching a few seconds before moving on to something else. I've spoken to parents in the library who tell me their kids just can't get engaged or pay attention to a screen, which I completely understand. I think it'd be a little different if I'd been here before the pandemic and had already built relationships and rapport with the kids; as it is they really don't know me at all. I will definitely be repeating some of these books once we are able to have in-person storytimes again, someday.....
Posted by Jen at 10:51:00 AM