This month, I decided on a wintery theme, adapting a couple of activities from a previous program and adding some new ones to give it a snowflake science focus. Most supplies were provided in a take-home kit they could pick up from the library, which also had basic instructions and QR links to the Facebook page and YouTube channel where the video presentation could be found that would have a lot more information and where they could see me demonstrate the activities.

Materials Provided In the Kit:

I shared my screen to show them an absolutely phenomenal site about snowflakes, www.snowcrystals.com. This site belongs to Kenneth Libbrecht, a physicist and department chair at the California Institute of Technology (Caltech). Dr. Libbrecht's specialty is the molecular dynamics of crystal formation and growth, particularly ice crystals. So essentially, he is a snowflake scientist. I have followed his site for several years, and it contains a wealth of information, and he continues to add to it and update it. There are dozens of absolutely beautiful photographs of snowflakes, videos of snow crystals forming and growing into snowflakes, and lots of information on the science of snowflakes. In addition to this site, he has published many lovely books on the subject, and I'd bet you have at least one in your library.
I didn't want to go into too much detail and turn it into a high school science lecture, so I introduced the site, showed them a few of the photographs and talked about the different types, talked a little about how the type and size of snow crystal that forms is affected by the temperature and humidity, and watched a few of the videos of snowflakes growing. I encouraged them to explore the site on their own later because it is just so amazing, but what I wanted them to observe and what I wanted to emphasize was that snowflakes always have 6 points (unless of course they were damaged while growing), not four, not eight, but SIX. This is because of the molecular structure of water, which leads to a hexagonal lattice structure when it crystalizes.
[One of my pet peeves is seeing representations of snowflakes that have four or eight points, which is simply not possible. The physics and chemistry of water and ice crystal formation means that fully-formed, complex snow crystals, otherwise known as snowflakes, will always have SIX points. Some may think this isn't an important detail, or argue that 4- or 8-pointed snowflakes are easier to draw, or that it's okay to take "artistic license", but I feel that as information professionals, it is our duty to present scientifically accurate information, ESPECIALLY if we are presenting that art project as a STEM activity.]
I also wanted to show them snowflakes had symmetry, radial symmetry to be more specific, and showed that how no matter which direction you cut a snowflake in half through the middle, each side was more or less the same as another. I also discussed the saying that "no two snowflakes are exactly alike", and that while it is statistically possible and that snowflakes formed under the same conditions (in the same snow shower, for example) are likely to be somewhat or even very similar, to my knowledge no one has been able to credibly demonstrate fully-formed complex snow crystals (what we commonly know as snowflakes) that were exactly alike.
Activity #1 - Frost Formation

This one takes at least 30 minutes, so I started it first. (In retrospect, I should have just started a second one well in advance to be sure I would have good frost formation to show them, and I could have gone straight to the snowflake activities, then done this one at the end).

1. Fill the can about 2/3 full with ice. Crushed ice does work better, but cubed ice will work.

2. Add about 4 spoonfuls of salt (be sure to save a little for a later activity) and stir.
3. Top of with more ice and one more spoonful of salt, and just a couple of spoonful of cold water.
4. Let sit for 30-60 minutes, checking every 10-15 minutes or so to observe the water vapor condensing out of the air onto the surface of the can as frost. If you have a thermometer, check the temperature at the beginning, then at 10-15 minute intervals.
The salt causes the ice to melt by pulling energy from the surrounding ice/water, which ultimately causes the temperature to drop below freezing. So instead of the water vapor condensing on the surface as water droplets, it condenses as frost. This is the same principal by which homemade ice cream is made using ice and rock salt to freeze the custard.
Activity #2 - Snowflake Art 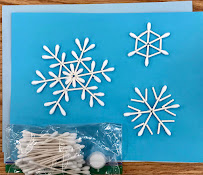 1. Keeping in mind the principles of snowflake science, use the cotton swabs and glue to make your own designer snowflakes on the blue cardstock.
2. Use the swabs whole or break into pieces. Use the photos on www.snowcrytals.com for inspiration or be creative, just be sure not to break the laws of physics ( 6 points and radial symmetry)!
Activity #3 - Snowflake Resist Art 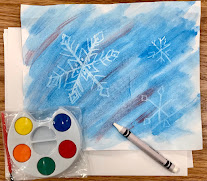 1. Draw snowflakes on white paper with a white crayon (or candle). It might be easier to draw a template in black marker on another piece of paper first, then trace over it. Again, be sure to follow the laws of physics with six points and radial symmetry.
2. Wet the water colors and load some on a brush and sweep over the paper, and watch your snowflakes "magically" appear.
Of course, it's really science, not magic. The crayon is made of wax, which is hydrophobic and repels water, so the watercolor paint does not stick to it, but the paper is hydrophilic and absorbs the watercolor, resulting in white snowflakes on a colored background.
Activity #4 - "Ice Fishing"

1. Fill a small- medium bowl about 1/2-2/3 full with cold water.
2. Float a few ice cubes in it.
[At this point I challenge them to try to catch an ice cube with a piece of string. Most will try some variation of lassoing it, which almost never works (except when I'm trying to demonstrate that it doesn't on live video, LOL). I give them a minute to start to get frustrated, then show how easily I can catch one without even tying a loop or anything, then show the trick.]
3. Wet a piece of cotton string (NOT synthetic; it must be able to absorb water) and lay it along the top of an ice cube.
4. Sprinkle it with a tiny pinch of salt, and wait about 5-10 seconds.
5. Now gently lift the string and you should have caught your ice cube "fish" (the photos are from the previous in-person program where I had made fish-shaped ice cubes to use).
6. Now see how many ice cubes you can catch on the same piece of string at the same time!
This works on the same principal as the the frost-growing activity, the salt initially melts the ice a little, but that causes the temperature to drop and it re-freezes around the string. Encourage them to experiment with the amount of salt used and the waiting time and note the results.
I meant to close with suggesting books in our collection related to snow, snowflakes, or other easy experiments to do at home, but I was running short on time to get everything ready and trying to get the video recorded, and completely forgot.
How It Went
This time I had 6 people register in advance that were specifically interested in the program (which is 6 more than registered for the first one), and gave out an additional 17 kits at the desk. This time I thankfully had no technical issues, and I was pretty happy with the video (other than getting a tickle in my throat and coughing in the middle). The video ended up being almost 30 minutes long, which is about 10 minutes longer than I'd like, but as it was I kind of rushed through the activities. I only had 3 people watching it live, but within just 3 days it had 40 views, 2 comments, and 7 likes/reactions on Facebook. Even if people didn't get a kit, they would likely have the materials to do at least some of the activities at home, and all materials are easily found at local stores.

I was happy with how it went, and really pleased to actually get some live viewers and several reactions and one comment, which was very complimentary, from patrons. I am hoping that interest will continue to grow as patrons learn about the program. I would love to do additional STEM programs for toddlers/preschoolers and tweens/teens, but right now the programmer and I have about all we can handle, since assembling kits is so time consuming. Once we begin in-person programming and stop virtual programs, then we might be able to fit some in, at least on an occasional basis if not as a regular, ongoing program.
Posted by Jen at 1:14:00 PM