Since the CLSP summer reading theme this year is "Tails and Tales", I am using animal themes for all my storytimes. This week I focused on wolves, and I wanted to avoid the typical "big bad wolf" story that paints wolves in a negative light since conservationists and wildlife biologists are working very hard in our state to re-establish wolf populations and educate people on their necessity for a healthy ecosystem.

Just a few days before storytime, I saw a news report that a litter of wild-born wolf pups had been spotted here for the first time in over 80 years. [I am holding storytime outdoors on the lawn for the time being.]

I introduced myself and asked all the kids' names, then started with a "Hello" song, going over expectations, followed by "Hello, Everybody" for a warm-up. I talked a little about wolves, how they almost became extinct in our country, but that while they are a dangerous apex predator they are also important to the ecosystem. I showed them some pictures of grey wolves to show all the color variations besides grey, pack size, and some adorable little pups. Then it was time for our first story, which I led into with "If You're Ready for a Story". 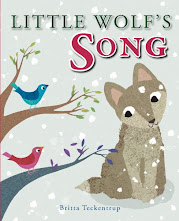 Little Wolf's Song by Britta Teckentrup is a sweet story about a little wolf pup who can't yet sing, or as humans would call it, howl. His siblings can all howl and they tease the poor little cub, causing him to wander off during a snow shower, becoming lost. When the moon comes out, Little Wolf finally finds his song, letting out a long, beautiful howl that leads his father to him.

This story provides opportunities to talk about several important things that kids can relate to: wanting to be able to do things they aren't quite developmentally able to do, teasing and being teased, and what to do if they should be come lost (stay where they are and yell for their parents, just like Little Wolf did). I also was glad to find a story that featured a wolf in a more natural light, rather than being a "Big, Bad Wolf" or being anthropomorphized.

Next we did a "Five Little Wolf Pups" counting rhyme accompanied by clip art on my magnet board: 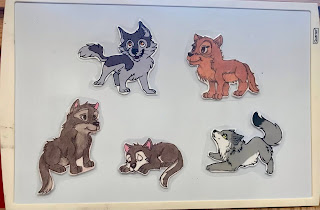 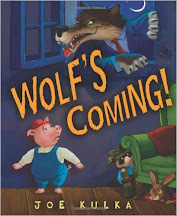 Unfortunately, the only other wolf story I could find in our collection that showed wolves in a natural and positive way that wasn't too long was also about a little pup having trouble learning to howl (a new one by Joseph Bruchac with lovely art), so I had no choice but to use a story with anthropomorphized animals and fell back on one of my favorites, Wolf's Coming by Joe Kulka.

I love this story, how it builds suspense with the urgent warnings of "Wolf's coming!" and dark illustrations, leading the audience to think the animals are running away in fear that Wolf is going to eat them, but then ends with the wonderful surprise twist that they are actually throwing Wolf a surprise birthday party!

Of course, we then had to sing "Happy Birthday" to Wolf, and count the candles on his cake to see how old he was.

Then I showed them the materials in the take-home craft kit and examples of what they would make. The packet included a sheet of interesting wolf facts, a color-cut-and-fold wolf, and the materials for a paper bag puppet. Then we closed with a good-bye song, announcements, and I thanked them for coming.

I was very happy to see my audience had grown from 10 people the week before to 18 people this time, though 3 did leave shortly after we began due to an older child that really didn't want to be there. Everyone else stuck through until the end, despite the near 100 degree heat! Though we were in the shade and the humidity is very low here, it was somewhat uncomfortable, so I was impressed the rest stuck it out.

Everything went well, most of the kids were really engaged and seemed to enjoy everything. One of the little ones wandered a little, but of course that's to be expected and perfectly okay as long as they aren't bothering anyone else, in the way of the book, or headed toward the road or parking lot. And, as proof that toddlers are paying attention even when they seem not to be, his mother later told me that he kept saying "wolf" over and over the rest of the day.