This week was a momentous occasion - after more than 15 months, I was finally able to do a real storytime, in person, with REAL LIVE KIDS!

My last regular storytime was on February 22, 2020. That seems like a lifetime ago, so much has changed since then. It was a Yeti-themed storytime that included a hunt to find little stuffed yetis and was so much fun. Little did we know that day how our world was about to change. Within 3 weeks the library shut down and didn't reopen for several months, during which time I finished my MLIS but lost my job, along with 100 other part-time employees. My life was turned upside down as I was forced into a desperate job hunt, resulting in relocating across the country where I had to quickly adapt to a new world of virtual programming, take-home kits, and curbside service.

Though caregivers and kids really liked the take-home kits, and I was proud of what I was able to come up with and put together, I found them incredibly time-consuming and expensive, much more so than in-person programming. I found virtual programming to be very unsatisfying without the face-to-face interactions, and with little to no engagement in the virtual environment it didn't seem as if anyone was really watching and felt rather pointless. But, I figured doing virtual storytimes at least kept me in practice.

Finally, this summer I felt like it was time to start transitioning back to normal programming. I had been vaccinated, state and local restrictions were lifted, and the library I worked for dropped all restrictions as well, including masks. But, since children still cannot get the vaccine I was not quite ready to have them crowded together in a closed room and opted to plan on having storytime outdoors. We have a nice greenspace in front of the library with large shade trees that makes a very nice spot for storytime, aside from some road noise.

Since it would be the first storytime in a very long time for some, and the first ever for others, and no one would be used to sitting and listening quietly I decided an active storytime would be best for the first one and focused on books that would lots of opportunities for kids to move around and act things out.

I started by introducing myself and thanking them for coming and telling them how happy I was that we were finally able to start having storytime together again. We sang a quick "Hello" song, followed by a warm-up song that had some actions and identifying body parts ("Hello Everybody"), then led to the first book by singing "If You're Ready for a Story". 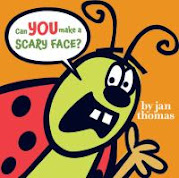 For the first book I chose one of my favorite movement books, Can You Make a Scary Face? by Jan Thomas. Though the adults might get a little annoyed by all the stand up-sit down silliness as the lady bug leads the audience in a game of pretending, the kids always love it. This story has wiggling, dancing, pretending, and more.

I also love Jan Thomas's illustration style. Her illustrations are simple, big, bold, and bright with heavy black outlines that work really well for storytime and for younger kids in general.

I followed that with a nice wiggly bug/animal themed song: 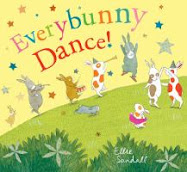 Next was another favorite movement book, Everybunny Dance by Ellie Sandall. This is such a fun book that allows the kids to dance, play pretend instruments, and sing along with all the bunnies, until a fox shows up and the bunnies have to run and hide.

But, as it turns out, the fox enjoys dancing, singing, and making music as much as the bunnies, but he is very lonely. In the end they all dance and play together, with one group of bunnies forming a line and presumably doing the "Bunny Hop" dance.

Of course after that we had to dance the Bunny Hop ourselves!
I finished with a quieter activity, a bunny counting rhyme accompanied by a flannel board: 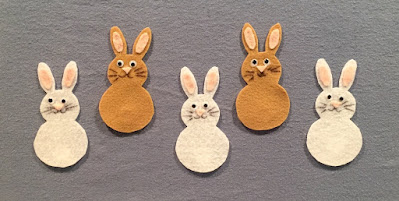 Everything went well, and all the kids participated and seemed to have a good time, and I can't wait for the next one! I know the take-home craft was a bit lame, but I wanted to keep it simple since I had no idea how many kids to expect and I had no time due to being understaffed and overwhelmed with the beginning of a chaotic summer reading program (that I had no part in planning).
Also, I must admit, I don't care for storytime crafts. It's so hard to come up with something simple enough for the younger kids to do in a relatively short time that isn't totally lame, the parents often take over, and they typically involve little creativity. I'd prefer just to have an after-storytime activity or play time and save arts and crafts for a separate program, but this community seems to really want crafts. I hope I can slowly wean them away from them.
Posted by Jen at 12:14:00 AM