I was first inspired to plan a polar bear theme by Mac Barnett's new book, A Polar Bear In the Snow, but at the last minute decided not to use it because I wasn't sure the pictures would be visible and clear enough to everyone, with us having storytime outdoors and being all spread out.

We started with a "Hello" song, then introductions followed by a warm-up song, "Hello, Everybody". I brought out a non-fiction book to share a few pictures and interesting facts about polar bears and where they live, then led into our first book with our "story song".

I started with a silly book guaranteed to get their attention and lots of laughs, Polar Bear's Underwear by the creative team collectively known as Tupera Tupera. Polar Bear fears he has lost his underwear, and his friend Mouse kindly helps him search for them. They find several different pairs of underwear, but none are his. When Polar Bear finally finds his underwear, it turns out they were never really lost at all.

Kids love guessing whether each pair of underwear is Polar Bear's, and if not, who they might belong to, with the patterns of each pair giving a hint as to their owner. For example, the striped underwear belongs to Zebra, the underwear with carrots on them belong to Rabbit (who is wearing them on his head), and the tiny pair with flowers on them belong to Butterfly. This book is a lot of fun, but also encourages critical thinking in making predictions and introduces the concept of camouflage.

Next we did a counting down rhyme, accompanied by clip-art on my magnetic board: 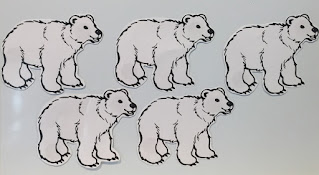 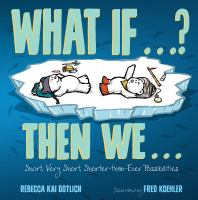 Our second book, What If....? Then We.... by Rebecca Kai Dotlich and Fred Koehler, encourages both imaginative and positive thinking. I introduced the book by telling them that asking "what if" questions is not only a great way to learn about things, asking "what if" is also a great way to begin a story using our imagination, just as the two polar bear friends do in this story. Through a series of "shorter than ever possibilities" the two friends propose a potentially negative situation, such as, "What happens if all the words in the universe disappear", and come up with a positive solution "We would invent our own language", and show that friends can help each other face tough or scary situations.
I followed this with a song about several different kinds of bears, including polar bears, sung to the tune of "Mary Had a Little Lamb": 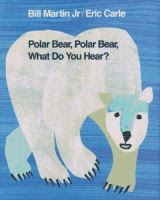 I finished with a classic, Polar Bear, Polar Bear, What Can You Hear? by Bill Martin, Jr. and Eric Carle. I love this series for the simple, repetitive rhyming text that invites children to join in repeating, and Eric Carle's bright, bold illustrations that invite the children to identify the animals. While Brown Bear, Brown Bear also encourages color recognition and Panda Bear, Panda Bear focuses on actions, Polar Bear, Polar Bear focuses on animal sounds and encourages the reader/audience to imitate them, which helps develop phonological awareness.

After I read the book to them, I mentioned the other two books in the series and showed them another unique trait they all have, which is in addition to reading them aloud, they can also be sung to the tune of "Twinkle, Twinkle, Little Star"! I didn't sing the whole book, but demonstrated with the first few pages. I explained finding multiple ways to share or explore a favorite book helps children engage in a new way and calls attention to the words and rhythm in a different way, also helping to develop phonological awareness and language.

I ended by showing them the simple take-home craft, a polar bear finger-puppet make from cardstock circles, googly eyes, a small black pom-pom for the nose, and a white one for the tail. I also let them know about our Bubble Party the next day, and invited them back for storytime next week. Then we said and sang our goodbyes.
How It Went
I was a little concerned that some people wouldn't come back this week due to the heat, as it had been uncomfortably warm even in the shade last week, and when only one family was there just before starting time it seemed my fears were being realized. But, several others soon showed up and a few more arrived a little bit late, so that I ended up with an even larger audience than the previous weeks with a total of 27 people (12 kids & 15 adults). Fortunately, even though the temperature was just as high this week, there was a bit of a breeze so that it was quite comfortable in the shade.
Everyone loved Polar Bear's Underwear and Polar Bear, Polar Bear (which they recognized as being related to the Brown Bear, Brown Bear they were already familiar with), but I don't think they were as engaged with What If....? Then We.... That one might be better for a one-on-one read. The best thing is that everyone stayed for the whole time, except for one toddler who got too fussy, which is a nice change from the strange Saturday storytime phenomenon I used to experience at my old library where half the audience would get up and leave en masse after the first story (because they didn't come specifically for storytime, just happened to be there and had other things to do and places to be). Doing a regular weekly storytime with a regular crowd is much better!
I am so relieved to be doing in-person storytimes again! They are so much more rewarding than doing virtual programs and take-home kits. I really thrive on the interactions with the kids, the audience feedback, and building relationships with the families. It's still just a tiny bit awkward getting back into the swing of things, I feel like my transitions are quite as smooth as they used to be and I keep forgetting to work in my literacy tips, but I think by the end of the summer I'll be back to 100%.
Posted by Jen at 3:59:00 PM