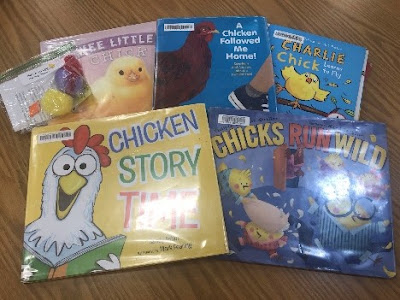 The YS department at the main library had a bunch of these egg-hatching craft kits leftover, so I decided to take some off their hands and do a chicken-themed storytime. I've ready many chicken books as part of farm or bird themes, but I've never done a whole storytime about chickens before, so it would be a new theme. I started with introductions, going over expectations, then waving and singing "Hello" to each other. That was followed with a warm-up song.
I use the same warm-up song for a month, then change it, and this month's warm-up song was the Alphabet Song, BUT with a twist. Instead of singing it to the usual tune (Twinkle, Twinkle Little Star), each week we would sing it to the tune of a different children's song, and this week was the tune of "Head, Shoulders, Knees, and Toes". The alphabet can be sung to several different tunes, and this allows different letters to be emphasized and heard distinctly, so "L,M,N,O,P" don't always get squished together, and it forces one to think about what they are singing rather than going on automatic and relying on muscle memory. Mel's Desk has a great resource for this, mapping out the alphabet to 5 different tunes.

After the warm-up, I used a non-fiction picture book with lovely illustrations, A Chicken Followed Me Home by Robin Page, to introduce the topic and some factual information about chickens before moving on to our silly stories. We talked about where chickens come from, saw pictures of a few different breads, rooster vs. hen, and the sounds that rooster, chickens, and baby chicks each make. 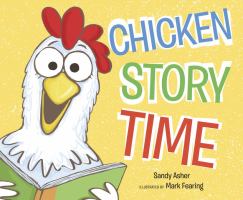 Following our lead-in song, "If You're Ready for a Story", I read one of my personal favorites, Chicken Story Time by Sandy Asher and Mark Fearing. 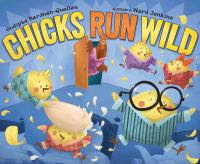 I love the way this ends with them sitting back down, ready for the next story. I chose a favorite of a former manager, Chicks Run Wild by Sudipta Barnhan-Quallen and Ward Jenkins.
This is truly a fun read aloud, with rhyming text and a repeating line. Mama Hen is trying to get her little chicks to bed, but the second she closes the door, those naughty chicks run wild! Mama finally catches them, but her reaction may not be what you expect. Great fun, with a twist.
We finished with a song that let us explore various chicken-related sounds, which is great for phonological knowledge.
The Chickens In the Coop
The chickens in the coop go Bock, Bock, Bock.
Bock, Bock, Bock; Bock, Bock, Bock.
The chickens in the coop go Bock, Bock, Bock, all day long.
Roosters go Cock-a-doodle-doo....
Eggs go Crack...
Chicks go Peep....
We san our "Goodbye" song and I passed out the take-home craft kits that consisted of a plastic egg, a large yellow pom-pom, and other accessories to make a little chick hatching out of an egg.
How It Went
We had a lot of fun with this one! As always, Laurie Berker's "I Know a Chicken" was a big hit, but they enjoyed all the songs and books.
Posted by Jen at 6:09:00 PM