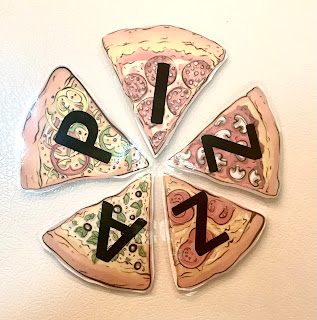 Maybe you don't think those two things go together (but it does seem like people are putting avocados on/in everything these days), but think of it as both being party/snack foods featured in September.

I had originally planned this as two separate themes, first planning a pizza storytime two years ago, but then I postponed it when I found out a coworker already had one planned. I have also been wanting to use the book Holy Squawkamole! in storytime every since I first read it, and planned it for last September after finding out September 16th is Guacamole Day. But, then the pandemic hit and I was unemployed last September, so I waited another year. This time around I ended up being on vacation the week of the 16th, so I decided to just combine the two topics on the following week.

As always, I started by introducing myself and briefly going over expectations (basically, it's okay if they are wiggly and roam as long as they are not bothering anyone else or obstructing anyone's view of the book), then we sang our "Hello" song, followed by this month's warm-up song, "Head, Shoulders, Knees & Toes":

And to make it a little trickier so they have to think about what they're doing and work their brain and muscles differently rather than relying on muscle memory, we did it in reverse:

And since it is Hispanic Heritage month and I like to add a little Spanish here and there when I can anyway (our community is 50% Hispanic), we did it in Spanish next:

They all agreed it was more difficult to do in reverse and in Spanish since that's not what they're used to, but everyone did a good job and giggled when they messed up. I told them next time we might have to try it in Spanish AND reversed, LOL.

Not only is this song fun to do and gets them moving, it's familiar to most so more engaging, it reinforces vocabulary for naming body parts, both in English and Spanish. Next we gradually settled down with our "Story Song", starting with stomping our feet and ending with taking a seat, so we were ready to start our first book, Holy Squawkamole! The Little Red Hen Makes Guacamole by Susan Wood and Laura Gonzalez. This is a fun re-telling of the traditional folktale, with a Latin American twist. Instead of bread, the Little Red Hen is making guacamole, and needs to gather and prep avocados, tomatoes, onions, and cilantro. The animals that she meets and asks for help are common to Central/South America: coati, armadillo, iguana, and snake.
This book has a great rhyme and rhythm when read aloud, and the audience will have fun saying "Holy Squawkamole!" over and over, and the illustrations are quite charming. I like the exposure to Spanish words and animals they may not be familiar with. Another great thing about this book is that in the end papers there is information on the cultural background of guacamole and several variations influenced by cuisines from other cultures, a basic recipe, and a glossary.
Then we segued to pizza by sharing our favorite toppings and voting on whether pineapple was a legitimate pizza topping (most of the adults agreed it was, kids weren't too sure), and pretending to make our own pizza with this variation of "Pat-a-Cake":
Pizza Man
Pat-a-pie, pat-a-pie, pizza man (clap hands)
Make me a pizza as fast as you can (shake finger)
Roll it  (roll)..... Toss it  (pretend to toss in air).....
Sprinkle it with cheese (pretend to sprinkle)
Put it the oven (pushing motion)
And bake it for my friends and me! (gesture to friends, point to self)
I would recommend pointing out the substitution of "pie" for "cake" and briefly explain that pizza is sometimes referred to as a "pizza pie", since kids may not be aware of that expression. 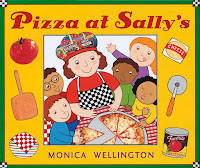 Next I read the classic Pizza at Sally's by Monica Wellington. I like that this book not only shows the steps in making a pizza, but at least alludes to the fact the ingredients all have to come from somewhere, and you can elaborate on that as you read it, or afterward. These days so many people are completely disconnected from the sources of their food, and need to be reminded/educated to the fact that it doesn't just magically appear at the supermarket.
I also like that this book subtly promotes community gardens and supporting local businesses. I had the kids act out each step of pizza-making along with Sally, and again discuss toppings. I showed the recipe for pizza at the end of the book, mentioning that kneading and playing with any kind of dough, whether it's pizza dough or play dough, is great for developing the muscles and coordination of little hands and fingers so that they can hold books and pencils for reading and writing later.
Next we did a pizza-themed variation of "BINGO" to work on letter knowledge, using clip art of pizza slices with each letter in the word "pizza" printed on a slice: 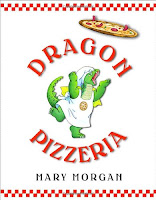 Our final book was another fun one, featuring an a-typical pizzeria making some rather unusual pizzas. Mary Morgan's Dragon Pizzeria features a pizzeria in Fairytale Land owned by dragons BeBop, who likes to bake, and Spike, who likes to go FAST, making him the perfect delivery person. As they take each order, the audience can guess who it's for based on the toppings, such as a pizza with magic beans for the giant from Jack and the Beanstalk, and a pizza with frogs, snails, and lizard tales for the Wicked Witch.
This is a really fun read aloud with several different rhymes and rhythms, as BeBop chants a different rhyme as he makes each pizza, and the customers respond in rhyme when their pizza is delivered. A little long for younger kids, but it's easy to skip one of two of the orders to shorten. The illustrations are just a tad busy for a group read aloud, but they are well-done.
We closed with a good-bye song and I passed out a take-home craft.
Craft
I am doing take-home crafts since we are having storytime outside, and between not having tables (other than a round wire-mesh picnic table) and it often being windy, crafts outside just don't work out very well.

This week's craft was assembling a "shapes" pizza. I gave them a sheet of light brown with an outline of a pizza on it to cut out themselves so they would get a little scissor practice to develop those fine-motor skills, then the following shapes/colors: large red triangles for tomato sauce, lots of small rectangles in yellow & white for shredded cheese, reddish-brown circles for pepperoni/meatballs, red semi-circles for tomato slices, and small green squares for chopped peppers. This would allow for practice identifying shapes and colors, and use the pincer grasp in picking up and placing the various toppings.
How It Went
It went well for the most part, ran just a little bit long, and the kids seemed to get just a little bored with Pizza at Sally's, and I don't think any but the one slightly older child got the fairy tale references in Dragon Pizzeria, but the adults did and enjoyed it.
Since school started and I split from doing one family storytime to doing a toddler storytime in addition to a family storytime, my attendance levels have been low at both, and now I'm kind of wishing I had just left it at one family storytime a week, especially since numbers will likely drop again when it gets colder and we have to move inside. It's impossible to build any momentum with the constantly changing Covid situation, and that's really frustrating and discouraging. The community has made it clear they are not interested in virtual programming, so I'm going to focus on keeping in-person if at all possible. At least the lower attendance does allow for easy social distancing without being too far away to see and hear, so there's that.
I know our community does love the various kits, but I don't feel they foster any real engagement or have as strong a connection to literacy and learning, and don't seem to result in any increased use of the library or circulation. I also hate the waste with all the packaging needed, and wonder how many actually do the activities, or if many just end up sitting around and eventually getting thrown away.
Posted by Jen at 9:31:00 AM