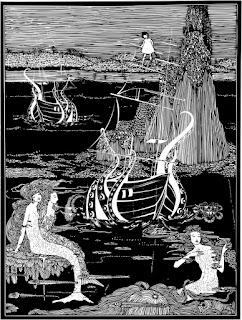 As I explained previously, though I didn't really plan on doing weekly themes, it just kind of ended up that way, and for week 2 I focused on mythical sea creatures. And that of course mean mermaids and sea monsters (but NOT narwhals; narwhals are real).

This has turned out to be a total misnomer, as what I had envisioned as a toddler storytime has quickly morphed into an all-ages family storytime. Which is rather ironic, because the reason I planned it as a toddler-specific storytime is that I was mostly getting toddlers for my family storytime during the winter and spring, LOL! Also, it would give me an excuse to do very simple crafts with little prep or sensory activities instead.

I am still keeping it geared for toddlers, though, with shorter books, egg shakers, scarves, and bubbles, and I employ the big kids as examples of good listening and turn-taking so the the littles can learn. I started off with a hello song, a "Creatures of the Sea" song to the tune of "The Wheels On the Bus" to warm up, and a lead in song.

I first read Three Little Mermaids by Mara Van Fleet, a great little counting book with lovely illustrations, pull-tab movement, and a little sparkle. This was perfect for the younger kids but it's an older book and out-of-print with no reasonably priced used copies available, so if you don't already have it, you're probably out of luck. Afterward, we did an egg shaker song, and the "Popcorn" scarf song (a clear favorite with all my regulars), then read a second book, I am a Sea Monster by Andiene Lopresti and Jim Lopresti.

The really neat thing about this book is that is was written by a child! Andiene came up with the character and the initial story, and her father helped her hone the story, illustrated it based on her initial picture of the character she came up with (which is included at the end), and helped her self-publish it. It is a cute story about a sea monster looking for his friends, with a message that playing outside with friends is better than screen time alone. I really liked the short, simple text and charming illustrations.

Afterward we did bubbles with a counting song, reminding the big kids to let the toddlers get to the bubbles first and watch out for them. Then we closed with a good-bye song, and those that chose to stayed for dot painting mermaids and sea monsters.

Unlike Toddler Time, I do end up getting mostly the intended age group for this one. I didn't do a typical storytime, just went straight into reading two stories, Oona by Kelly DiPucchio and Raissa Figueroa, and Monsters In the Briny by Lynn Becker and Scott Brundage. Oona is about an adventurous mermaid who likes exploring, and finds a crown. This book would go great with the mermaid crown craft I had planned for the elementary group. I had already planned a different craft for this group before I selected to read Oona.

Monsters In the Briny is a clever book meant to be sung rather than read, based on the old sea shanty "What Do You Do with a Drunken Sailor", but with child-appropriate lyrics about legendary sea monsters, such as "What do you do with a grumpy Kracken..." It is super cute and I thought it would be a lot of fun. I really liked the rhythm and word play, with rhyme and alliteration. I really thought they would get into it, and I encouraged audience participation by asking them to tap or clap along to the rhythm, and join in with the "Yo! Ho!"s of the chorus, but I got nothing but crickets. It was so awkward and hard to finish like that. Very disappointing. I probably shouldn't have skipped the typical storytime beginning routine to help warm them up.

Then we moved on to the craft, which got a better reception. I saw this cool paper collage on Pinterest, using torn patterned paper in blues to make waves, and circles of patterned green papers to make a mermaid's tail. So I printed out a lot of patterned paper in blues, greens, purples, and rainbow (yes, probably used a lot of ink, but that comes out of the office supply budget, not mine 😉). I gave them a sheet of light blue construction paper to glue them on, a choice of glue sticks and liquid glue, and scissors to cut out a tail fin. I told them it since we could only see the tail, it could be whatever they wanted it to be, a mermaid, a merman, a giant fish, or a sea serpent. They seemed to enjoy this, and at least the parents mostly let them tear the paper themselves.

I started out by once again asking the kids if they had been reading a good book they wanted to share about, and several did, followed by me booktalking a few books related to mermaids and sea monsters, including the original Emily Windsnap by Liz Kessler as well as the new transitional chapter book adaptation for younger readers, The Kingdom of Wrenly series by Jordan Quinn with both sea monsters (#3) and mermaids (#8), and a great juvenile graphic novel adaptation of Jules Verne's 20,000 Leagues Under the Sea (I'm also partial to the "Great Illustrated Classics" and similar adaptations of the classics, though I know that's somewhat controversial.) by Carl Bowen.

Then we talked a little about mythical sea creatures and the real creatures that might have inspired them, and I presented the three crafts I had for them. I told them they could do one or all three, whatever they chose. The first was a merperson crown (insert collective groan from the boys), which I quickly pointed out was not just for mermaids or princesses, but that the king of merpeople, Triton, also wore a crown. For this, I provided pipe cleaners in silver, gold, and white iridescent, pearl pony beads, and cowrie shell beads. The second was using pipe cleaners to make a trident, also needed by any ocean ruler, and the third was making a paper chain sea serpent.

Despite the initial groans, I noticed that while the boys typically started off making a trident first, most of them did end up making a crown as well. Some of them got really creative, one making a mini "travel trident" and another making a tri-trident, or triple trident, with three heads. I told them they could make their sea serpents as long or short as they wanted, and a couple of kids made their really long! They seemed to really enjoy the crafts, and one of the moms made a truly beautiful crown (after all the kids were about done and it was obvious we had plenty of supplies left; she also helped clean up!) 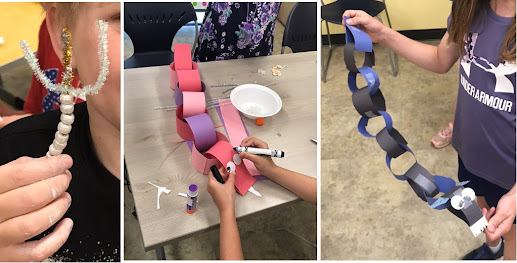 This week we did not have a guest performer, so we had a Family Movie Day, and showed Luca (saving the Little Mermaid for later since we just had Bright Star Theatre in last week performing the original story), a movie about a sea monster and his friend who want to explore living on the surface among humans. I thought with the recent heat wave people would be glad to come in out of the heat and relax while watching a movie in the AC, after doing all the summer things for a week, but only one family came. I had it in the morning; next time I'm going to have it in the afternoon to see if I get better turnout. I also forgot to promote it on Facebook until that morning.

My co-worker had an anime night where they discussed their favorite anime characters, made sushi beeswax candles, and watched anime (I don't know what she chose).

All in all, it was a good week. Other than the movie, I had really good turnout for all programs, with another packed house for the elementary program. We are still having a lot of confusion about registering for the reading challenge on Beanstack vs. registering for programs and events, and registering for each individual program. People register for one thing, and they think they've registered for everything for the whole summer. But since our room can really only accommodate up to 36 kids and accompanying adults without being really overcrowded, and that's the number I based ordering supplies on (fully expecting far less than 36!), we really have to require registration.

There's also been some fallout over my insisting that only kids ages 6-10 could participate in Elementary Explorers program for kids aged 6-10.  With the high demand, I can't let toddlers take spots away from actual elementary aged kids, materials are limited, and activities that are engaging for elementary kids are not appropriate, and often not safe, for toddlers. I put out some age appropriate toddler toys, busy boards, and board books, so it's not like I told them they couldn't bring them or didn't make any effort to accommodate them. Plus we have programs specifically for toddlers, preschoolers, and families! But despite all that, though I'm not aware of official complaints, one mom told my assistant that "there were a lot of hurt feelings" and I was the topic of gossip among a certain clique who is used to special treatment.

Sorry, not sorry. I am not going to "dumb down" every program to toddler level, nor risk being blamed for a toddler being hurt while engaging in an activity that is not meant for them,  nor am I going to deny an older child a spot in a program meant for them so that a toddler can do it. There is NOTHING in this town for elementary kids in the summer, and the summer is the only time most of them get to come to the library regularly. While I include everyone in summer reading and plan programs for all age groups, I think of summer as being mainly for the older kids; the under 5 set gets the rest of the year.

Also, I'm new here, got a late start planning because of that, and this is the first somewhat normal summer in 3 years. My predecessor was not a librarian and did things very differently than most libraries, and I can tell we have very different philosophies; also she left me absolutely ZERO information about anything. So, I had no idea exactly what she did, what to expect as far as turnout, what kind of programming people would want, what days/times would be best... I just had to pick something and go with it. After this summer, I will have a much better idea of how to plan next year, and I can already tell I will want to do things a little differently. For one, I'll just stick with family rather than age specific storytimes. And for another, I will add more family craft and fun programs. But I will still keep elementary programs for elementary-aged kids.

Hope everyone else had a good week! Two weeks down, just six more to go!