SRP Week 1 - Going to the Beach 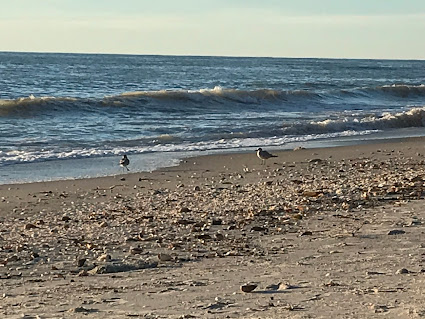 So there is always ongoing discussion in youth services about themes, usually in relation to storytime, but also in relation to summer reading. Many libraries follow CSLP or iREAD themes, some come up with their own, and some don't really have a theme, other than "summer at the library". I've always said themes are optional, and sometimes can be fun and make it easier to plan, and sometimes can be too restrictive and make it more difficult.

Most of the libraries in my state follow CSLP, as does mine, so our theme is "Oceans of Possibilities". This was a very easy theme to decorate around, and I thought would be pretty easy to program around, but I found it harder than expected. I ended up picking several activities I wanted to do, looking at when I had scheduled guest performers, and what movies I had planned to show, and picking weekly themes to loosely follow to give me some direction [however, I am thinking more and more of moving away from themes, especially after looking at the CSLP themes for next year]. For the first week, I decided on a loose "beach" theme, with sand-based activities.

This program was a typical toddler storytime. We started with a hello song, and an intro talking about the beach, a warm up song to the tune of "The Wheels On the Bus" that incorporated sounds or movements based on things we see and do at the beach, and a lead-in song to the story, Sea, Sand, and Me! by Patricia Hubbell & Lisa Campbell Ernst.

After the story we did an egg shaker song, and I had planned a rhyme counting sand castles with pictures on the magnetic board, but it was a large crowd and several were getting restless, so I skipped it and went straight to bubbles and "Ten Little Bubbles" song, then our good-bye song. Afterward, I got out the kinetic sand with molds and cookie cutters for them to play with. I had a pretty big crowd, and it went pretty well, but was a bit chaotic and noisy with so many little ones who weren't used to the routine yet.

For this group, I focused more on activities today, as I've noticed the older kids usually don't like doing all the songs and rhymes. I started by reading Day at the Beach by Tom Booth, a story of a boy who wants to build the best sandcastle ever, without his little sister. In the end, he discovers it is more fun to play together, even if the castle isn't as perfect.

After the story, they made sand art pictures, and played in the kinetic sand. The sand art pictures were from Oriental Trading and worked surprisingly well. They are kind of like stickers; you peel the backing off all the sections that you want to be a particular color, sprinkle the sand over, press in lightly, dump off the excess, then move on to the next color. Though some needed more help the others, and some grown-ups may have helped a little too much, everyone really seemed to enjoy it and were really pleased with their pictures.

For the older kids I was more ambitious (maybe a little too ambitious, LOL). I started off with asking if anyone wanted to share about any books they had read recently that they really liked, and about three kids did, and after that I booktalked Beach Bully by Jake Maddox, with themes of adjusting to a new town, trying new things, and dealing with a bully.

Then we moved on to the primary activity, making "Beach Slime"! By now everyone is probably somewhat familiar with making slime, and that it requires glue and an activator, but few really knew anything about the actual science of it. I explained that glue is a polymer, which means that it is made up of molecules that are very long chains, and to imagine them as kind of like spaghetti noodles that when first cooked slip and slide easily, and pour much like a liquid. But when an activator is added, such as borax, it cross-links all the polymer strands together in a matrix, rather than individual strands. So then it become thick, and more like a gel than a liquid, somewhat like spaghetti noodles do after they've been drained if no butter or sauce is added.

To make "Beach Slime" we simply added sand and tiny shells to my basic slime recipe using clear glue: 1/4 C glue, 2T water, 2T dilute borax solution (1 tsp Borax/1 cup warm water). I had them add 2 Tablespoons of sand initially, and told them if they wanted to try working in more a little at a time, they could. We added tiny shells at the end. I told them to add the borax solution a little at a time, and that they might not need all of it. Inevitably, some didn't listen and dumped the borax in immediately, so their slime ended up being really stiff and not very slimy. But two kids ended up with perfect slime that was very oozy and stretchy without being sticky.

After making the slime and cleaning up, they made wearable art by layering colored sand in miniature plastic bottle pendants, either fish or dolphin shaped, also from Oriental Trading. I bought a kit, but also some extra sand and funnels. I figure I will use the tiny funnels again with STEM activities.

In general it went well, but there were a few glitches and issues. First of all, I had a much bigger crowd than expected as only 25 had registered, but almost 40 showed up! (I even had to turn one family away because (1) they came late and I was done divvying out materials, and (2) I had NO place to put them.) So my teen programmer and I were were frantically having to measure out more water, glue, and borax solution. A few parents jumped in and started helping, which was great, except someone passed out the borax solution, which I did not intend to do until they were ready for it, and of course we had two spills, and a few kids who added it right away without waiting for instructions.

The other issue was although the program was clearly listed as "Elementary Explorers", clearly specified that it was for ages 6-10, stated we would be making slime, and there are programs specifically for younger kids as well as family programs, there were still several kids who were definitely under 6, including a baby and toddler. Now, I get sometimes younger siblings have to tag along, but parents should not expect them to participate in activities meant for older kids. Some of the borderline-looking kids I let pass, but I had to tell the mothers of two toddlers (one was really still a baby) that this was not a safe activity for toddlers, and that it really wasn't safe for them to be sitting at the table (not to mention too crowded) in case of spills, small objects, sand, etc. One seemed a bit surprised, but complied, the other went and got materials when my back was turned and let her toddler do it anyway.

Afterward I immediately beefed up my description to include language to the effect that younger siblings could not participate due to safety, limited supplies, and high demand. I do understand families have kids across multiple age groups, but I can't allow toddlers to take a slot from kids that are the age the program is intended for. And I can't do the kind of activities I want to do, that are appropriate and engaging for elementary kids, if I have to make everything toddler-safe. Plus there are toddler-specific programs and family programs every week as well. I'm sure there will be complaints, but there is so little in this town for older kids to do, but several other organizations providing programming for preschool and under, so I'm going to have to stand my ground on this one. I will have some board books and a few age-appropriate toys for toddlers in the room to help keep tag-along siblings occupied, but they will have to stay on the sidelines.

We had Bright Star Theatre come and perform Hans Christian Andersen's "The Little Mermaid". They did a really good job, and all the kids (except a couple toddlers) were really engaged. I saw one toddler repeated go up to her older brother who was sitting up front and pull on him and till him "let's go", and he would always shake his head and point to the performers saying he wanted to watch. I was a little worried that it would only appeal to girls (and had originally wanted to have them do "Treasure Island" for that reason, but that troupe was all booked), but there were several boys. Though it was fairly true to the original story, they softened the darkness with humor, and had several humorous references to the Disney movie and why they weren't doing that version (something about a very litigious mouse).

My coworker had a "Beach Bash" program where they played games and made candy sushi. Nine kids came, which is actually a good turnout for that age group here.

One week down, seven more to go! Next week is "Mermaids & Monsters", mythical sea creatures.