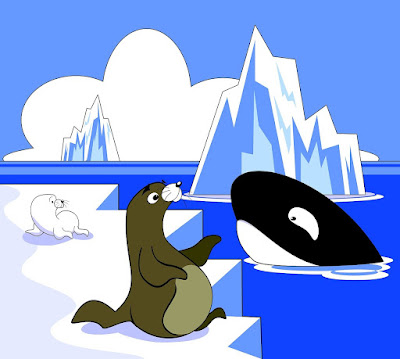 As a land-locked state we really weren't able to bring in many guest performers, speakers, or animals that really tied to the CLSP theme of "Oceans of Possibilities", so I just focused on ones that I knew would draw a crowd and people would enjoy. This week we had a petting zoo with farm animals, and while none of them were sea creatures, most of them were mammals, so I decided to make this week's theme "Marine Mammals".

This really ends up being more of a family storytime, but I still try to gear it more to the toddlers, with shorter/fewer books, more movement, and using shaker eggs and scarves. Plus it gives me an excuse to keep the after-storytime craft/activity very simple 😉.

We started with a hello song, then I introduced the topic and tried to explain a few key differences between fish and mammals, particularly marine mammals, then I showed several non-fiction books about several different marine mammals: whales, dolphins, seals, narwhals, and manatees (which I put on display for them to look over afterward). Then we sang our "The Creatures in the Sea Go..." warm up song, starting with marine mammals, followed by a lead-in song.

Our first book was The Whale In My Swimming Pool by Joyce Wan, which was perfect for the younger kids with its short and simple text and perfect amount of silliness. Then we did a shaker egg song, and their favorite "Popcorn" scarf song. That was followed by reading Together by Emma Dodd, a sweet little story about a baby otter and his mother spending the day together (this one didn't hold their attention as well). We closed with bubbles, and then moved to our after storytime activities. I gave them a choice of a simple baby seal craft or playing in the sensory table that had kinetic sand and little plastic marine mammals.

This storytime tends to have mostly kids of the targeted age, as compared to the toddler one. For this one, I started with the same hello, warm-up, and lead-in songs. Then I read This is a Sea Cow by Cassandra Federman, which is great for older kids and is a perfect mix of silliness and factual information to keep them engaged. We followed that with a song about whales to the tune of "Clemmentine":

Elementary Explorers (ages 6-10)
Once again we started with giving kids a chance to share about books they had read or were reading, then I booktalked a couple of books related to marine mammals: the Narwhal & Jelly series by Ben Clanton and Song for a Whale by Lynne Kelly. 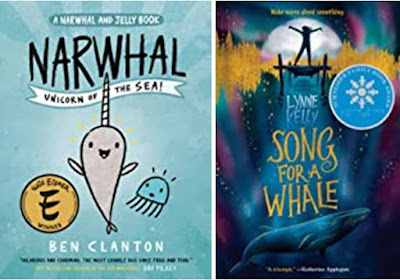 Today's program was a mix of craft and STEM. I had the same whale craft as from the previous program and a dolphin origami (with step-by-step photos and a QR link to the video) that I thought would keep them occupied while they took turns with the other activities. I also had a sorting activity where they had to sort plastic sea creatures into the appropriate groups: fish, mammal, bird, reptile, or invertebrate (we had briefly discussed the distinguishing features of each, and I provided a sheet with them listed). 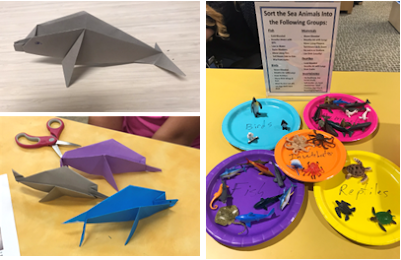 I also had two experiments about blubber, showing how it provided both insulation against the cold and buoyancy. To demonstrate buoyancy, I had cubes of raw steak to represent muscle and globs of lard to simulate blubber (blubber isn't quite the same as regular fat to begin with, and lard is processed animal fat). I had them predict whether the muscle would sink or float, then dropped it in a bowl of water, and they observed that it sank. Then I asked them to predict whether the fat would float or sink, and they observed that it floated. Finally, I had a cube of steak that I had wrapped in the lard (I did this the night before at home, spreading the lard out on plastic wrap, then putting the piece of steak on top, and wrapping it sushi roll-style). Again I asked to to make a prediction, then we tested it, and they observed that the muscle would float if wrapped in a layer of fat. 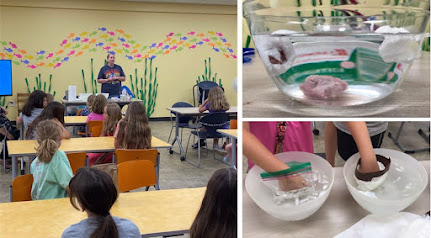 To simulate the insulating properties of blubber, I made lard "mitts". First I filled a zip-lock sandwich bag 2/3 full of lard. Then, I turned a second zip-lock bag inside out and carefully pushed it down in the middle of the lard in the first bag. Next, zip the inner bag to the outer bag, and seal with duct tape. For the control, zip two bags together the same way, but without anything in them, so the only variable between the two hand is the lard. [I explained the importance of having a control and testing only one variable at a time.] Put one had in the bag with the lard, squish the lard around evenly, and put the other in the empty bag. Then put both hands in ice water and observe the difference.
This program didn't go as well as I'd hoped. Although I thought the origami dolphin was pretty simple (despite not having much origami experience or patience), almost everyone struggled with it, and only a few kids did the sorting activity or the experiments. I think some parents didn't let them because they were put-off by my using raw meat and lard, even though the kids wouldn't actually be touching any of it (not sure they understood that part). I didn't have quite enough time to mentally prepare for this program and plan exactly how to organize it logistically, and I really felt it. But the kids still seemed happy, so maybe I was the only one who noticed.

Family Program
We had a huge turnout for the petting zoo, as expected.

Teen Programs
My co worker did her regular weekly teen Writing Club and a "Neon" Sign program, using EL wire, which glows.
Overall, it was another good week. Three weeks down, just five more to go!
Posted by Jen at 2:39:00 PM