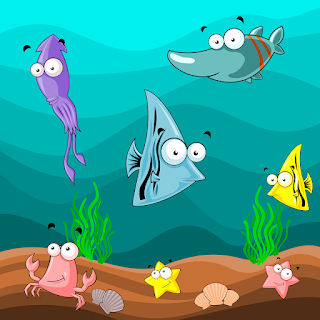 This week had a general ocean/fish theme, with some fun books and activities.

I started with the usual hello song, "The Creatures in the Sea Go...." to warm up, and "If You're Ready for a Story" to lead in to the first book, the classic The Pout-Pout Fish by Deborah Diesen and Dan Hana. I started off by bringing out my plush Pout-Pout fish and pointing out how it has a smile, rather than a frown like on the book cover, and we would have to read the story to see how he got from a frowny face to a smiley face. I also told them I needed their help with saying all the 'blub...blub....blub's and we practiced it together first. At the end, when the Pout-Pout fish became a 'kiss-kiss' fish, I went around and had the plushie kiss each child on the cheek.

I followed that with a shaker egg song, a scarf song, and by request, the "Popcorn" scarf song as well, then read one more book, I Spy Ocean by Edward Gibbs. This is a great book for the younger kids, with it's peek-a-boo die cut circles, short text, and vibrant illustrations. It also gives the opportunity to practice counting and identifying colors and animals. Then we closed with bubbles. For the after storytime activities they had a choice of drawing/coloring, an 'I Spy' type counting activity, a Pout-Pout Fish memory game, and/or fishing in the sensory bin with the prompt of identifying the colors of the fish they caught. Of course, they all chose fishing as expected, and some took the other activities to do at home later. 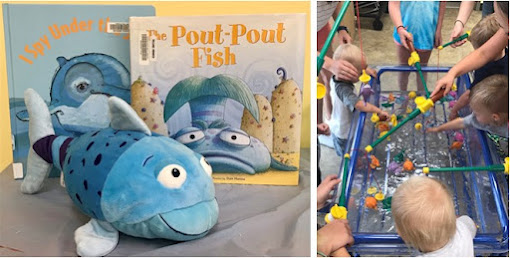 We started with the same beginning routine as the toddlers, and then I read a great new book, How to Hug a Pufferfish by Ellie Peterson. This book is as cute and funny as the title and cover lead you to expect, but it also incorporates an important message of consent and respecting others' personal boundaries and preferences, encouraging asking if it's okay to hug first and offering other alternatives to hugging. After this we danced along with Laurie Berkner's "Goldfish" song, and then did a counting down rhyme with fish using felt fish on the flannel board and our fingers. 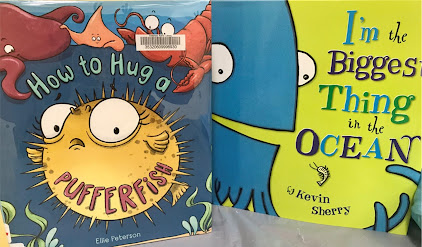 For our second book I chose I'm the Biggest Thing in the Ocean by Kevin Sherry for its humor, variety of ocean creatures to identify (including a pufferfish), and vibrant illustrations. Then we ended with a closing song and moved on to the craft, which I had been looking forward to every since I first came across it in the spring, knowing I would pair it with How to Hug a Pufferfish which I had just bought. This was a fun painting activity, painting a pufferfish using the tines of a fork to get the spiny effect, and adding fins, googly eyes, a mouth, and any other desired ocean details in the background. They turned out so adorably! While their paintings dried they took a turn at the fishing hole, getting particularly excited when they caught a pufferfish.

This was probably the best and most satisfying/rewarding program I've done all summer. This group has been super quiet and reserved, and today they finally warmed up and started interacting and participating more actively, and were all talking to me and showing me their pictures and the fish they caught.

First I gave the kids an opportunity to share about what they'd been reading, and only one or two wanted to today. I then book-talked a few ocean-related books in a range of reading levels and lengths: Daisy Meadows' Shannon the Ocean Fairy and Rihanna the Seahorse Fairy, Journey Under the Sea, a choose-your-own-adventure by R. A. Montgomery; and Dark Life by Kat Falls, a full-length middle-grade novel about a futuristic colony on the sea floor.

Then we made Ocean Slime, using the traditional Borax recipe with clear glue to look more watery. I provided blue and green food coloring, a large bottle of iridescent glitter, a large bottle of fine blue glitter, and then an assortment of small bottles of glitter in different shades of blue and teal, in both coarse and fine, to add in as they desired. I did caution them to add the smallest drop of coloring possible, but of course everyone added more and all of the kids' slime turned out much darker than mine. I also had tiny fish beads to add, but since they were kind of expensive I only had a limited amount. Rather than putting them out for the kids to help themselves, I went around and gave them out to be sure everyone got some, and roughly the same amount.

I had also planned on giving them an additional craft to do, but decided not to in the end as the slime took a little longer than expected, and they all seemed to be having fun playing with it and comparing each others', and we had some unexpected drama from an entitled patron who had a fit because I told her that her 3 year-old couldn't participate in making slime due to safety reasons. So I was ready to end a little early so I could fill my director in on the situation.
I had already explained the age restrictions for this program the week before when this person asked about her 3 year old participating, and the reasons why, and specifically said that for example, the next week we would be making slime using borax and it isn't safe for the younger kids and her 3 year old wouldn't be able to participate. But she came anyway and made a scene, expecting me to give in. My staff and I have had several other 'off' interactions with her, always pushing the limits, always trying to get more free stuff, always expecting special treatment. I knew if I gave into her on this, there would be no end to it, and though I will compromise on a lot of things, safety isn't one of them. I am not inclined to reward bad behavior, so don't generally give in to bullies or tantrums, whether from a four year-old or a forty year-old.

I understand not every library has age-restricted programs, but in my opinion some should be, and this is the only kids' program I do that is; they do have other options. I also understand that what they do at home is their business, and the parent can decide what level of risk they are comfortable with. However, when it's in my program and I am responsible for what happens in that room during the program, *I* get to decide how much risk and liability *I* am comfortable with, and considering my previous background in scientific research, working in labs, I feel I am better-qualified to judge the safety of science activities, and have done the research.

I only had two kids show up with their babysitter to watch "The Little Mermaid", and they left soon after it started because they assumed we were providing refreshments and I hadn't because our popcorn popper is broken, plus it's a paint to clean anyway and turnout for movies has been so low. In hindsight I could have provided individual bags of chips and water at least, but for some reason it just didn't occur to me.

But, I think a big issue is that we don't have a theatre or even a projector and screen, only a large-screen TV. In reality, most people probably have a screen that big at home these days, and with all the streaming services, they can watch whatever they want, whenever they want. So coming to the library to watch an older movie on a TV screen just isn't that attractive. I am going to try one more movie day, this time showing a new release and providing snacks and water, and advertising it more (I had misunderstood the licensing restrictions and was not advertising the titles at all). If I still don't get a good turnout, then I will give up on movies as a programming option and try something else.

My coworker offered a teen game day, with board games and the Switch, and a cupcake program. Unfortunately, the game day was not well-attended, only four kids showed up and they just played their own games on their own devices, and the cupcake program was cancelled due to lack of interest. Surprisingly only two kids signed up, and we decided it wasn't worth the expense and having a staff member coming on on a Saturday just for this program that we might not have anyone show up for. So we decided to just add a cupcake decorating activity to the end of the summer teen bash so those that did want to do it still have a chance.

Five weeks down, just three more to go! This next week is very busy, and I will be very glad when it's over. I'm really looking forward to the week after that, which will be Shark Week!