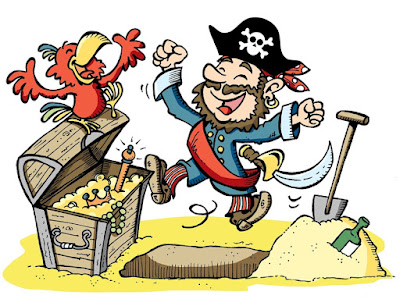 I had mixed feelings about doing a pirate theme, but I knew the kids would have fun with it, and an idea for a program came to me that I really liked, so I decided to embrace it and focus on the treasure-hunting part.

I decided to try making the last storytime of the month a "Music & Movement" storytime, using books that could be sung or at least had very strong rhyme and rhythm, more recorded music, and egg shakers, scarves, and instruments.I started off with our hello song, then we did Laurie Berkner's "Goldfish" song as our warm-up (I had the YouTube video on the screen so they could see the motions). I followed that with "If You're a Pirate & You Know It", acting out swabbing the deck, climbing the rigging, looking for land, shouting "Land, ahoy", and digging for treasure.

For our book I found a great one, Pirate Treasure Hunt by Jan Peck and Adrian Tans. This one is a rhythmic call-and-response chant patterned after the traditional "Going On a Bear Hunt" (this would be a lot of fun for older kids, too). I had the audience clapping the rhythm and made sure they knew they were supposed to repeat after me. I really like how this ends with the treasure being books and the key being reading.

Then we passed out scarves and ribbons to dance and move along with recorded music, again using videos with lyrics to help parents sing along. I chose a lively one for the first song, "Under the Sea" from Disney's Little Mermaid, followed by a more mellow "Baby Beluga" by Raffi. Then it was time for bubbles, and instead of our usual counting song, I played the version of "Beyond the Sea" from the "Finding Nemo" credits. Afterward they had a choice of making a pirate hat using two 12x18 pieces of black paper, and/or digging for treasure in the sensory bin where I had hidden plastic gold coins and "jewels" in the kinetic sand.

For this group I did a typical storytime with a hello song, warming up with "Creatures in the Sea Go...", and leading in with "If You're Ready for a Story...". I first read Pirate Treasure by Scoular Anderson, which tells the story of a treasure hunt in rhyming text, with a slight plot twist due to the map being upside down. I used it as the opportunity to plug needing to learn how to read a map rather than believing you can just rely on your phone. Then we pretended to be pirates with "If You're a Pirate & You Know It...." and "I'm a Little Pirate", followed by a second book, Shiver Me Letters: A Pirate ABC by June Sobel and Henry Cole. This is not your typical alphabet book with a whole spread for each letter, but a fast-paced tale with rhyming text that covers multiple letters on each page that is much more engaging.

After that it was time for crafts and activities! They had the same pirate hat craft and treasure digging activity as the toddlers, but I also added a parrot finger-puppet craft*. I have to say, I was really surprised at how hard a time parents had with the pirate hat craft. I thought it was really simple and pretty straight-forward, and I provided step-by-step instructions and photos, but they still struggled. And the parents generally did everything making the hat, while the kids colored the parrot finger-puppet or played in the sensory bin. The kids really enjoyed the sensory bin, but many still want the craft even if they don't make it.

*I got the parrot finger-puppet from an online vendor. I usually don't trust these sites, but I took a chance as I was in a rush and could not find anything else similar. But I later discovered they had stolen my credit card number and made fraudulent charges. Luckily, I caught it right away after they just made one small test charge, but lesson learned! The site was called "Happy Paper Craft", so be sure to avoid it.

I gave the kids a chance to share about any book they had read or were reading, then I briefly booktalked several books with pirates and/or treasure, covering a range of length and reading levels: the Pirate School series by Brian James and Jennifer Zivoin, The Hurricane Mystery from The Boxcar Children series by Gertrude Chandler Warner, The Kingfisher Treasury of Pirate Stories edited by Tony Bradman, Peter Pan by J. M. Barrie, Treasure Island by Robert Louis Stevenson, and Pirates of the Silver Coast from the Three Thieves graphic novel series by Scott Chantler.

The project for today was to decorate their own treasure chests, and win "treasure" to fill them with. I purchased kits from Oriental Trading which included a fairly sturdy cardboard treasure chest, some plastic coins (which were beige NOT gold as picture 😠, and the chest did not have a clasp as shown, either), gold ribbon, adhesive foam dots (to look like nailheads), and a few jewels (2-3). I also provided tempera paints in brown, red, blue, and yellow; an assortment of self-adhesive jewels in various sizes (I cut them into strips), markers, crayons, glue, gluesticks, and scissors.

Most of them did pretty well with keeping the paint thin so it would dry, and for those that didn't wiping off the excess with a paper towel worked really well and left a nicely distressed finish. They really liked the adhesive jewels I provided as well. I found that almost none of the kids used the metallic ribbon or foam dots that came with them. If you can find similar chests without the included items for cheaper, I'd go with them, but I couldn't find any.

After everyone was at least done with painting, I started a trivia game for them to win "treasure" to put in their chests. For the treasure I bought foil-covered chocolate coins with a pirate theme, candy necklaces, and ring pops. I had each table be a team, and I had trivia questions on pirates, sailing, oceans & ocean creatures, and related Disney movies. I would ask teams that had already won treasure to sit out questions to give others a chance. For this age, I wanted to be sure everyone got roughly the same amount in the end versus making it a true competition; the trivia game was just a fun way to give it out, and a chance to introduce some factual information.

Overall it went really well and the kids really liked the treasure chests and had fun with the trivia game, even if they didn't all quite understand that it was about knowing the answer, not just raising your hand, and they didn't really work together as teams. I did have one mom who is all about scoring as much free stuff as possible and completely misses the point of summer reading programs who tried telling her kids the answers or answering for them. However, I did not reward them but instead gave a reminder that the questions were for the kids, not the grown-ups. I did make sure her kids got some treasure in the end, though. She was also the same mom who jumped up with her kids and was ready to start grabbing supplies while I was still giving instructions, and had just said I would call them up a few at a time and was still talking! I had to say, "Excuse me, but we aren't ready for that yet, I'm still giving instructions."

I don't know if it's this community, or an effect of pandemic isolation making people forget how to behave, but the kids seem to be doing a much better job of listening, following directions, abiding by the rules, and being considerate of others than the adults!

I had planned on showing "Muppet Treasure Island", but no one showed up. I had decided to try an afternoon time since I got so few in the morning, but morning is better. I also think now with everyone having all the streaming services and being able to watch whatever they want whenever they want that watching free movies at the library just isn't a big deal anymore.

My co-worker had her weekly writing club for the tweens and teens.

Overall, attendance at most of the programs (except the Elementary Explorers) was down a little. I think it tends to drop slightly over the course of the summer anyway, but with a holiday weekend coming up many families may have been on vacation. Next week will probably be even lower.

And with that, I am halfway there! Four weeks down, just four more weeks of SRP to go!