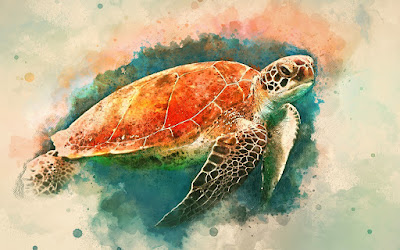 Since I had booked the local herpetarium for this last week of summer programming, I decided to use aquatic reptiles as the theme for this week's programs, including both oceanic reptiles and the freshwater reptiles that live in our land-locked area.

We started with a hello song, and "The Creatures In the Sea Go..." for a warm up, then I talked a little about aquatic reptiles, and read a non-fiction book, From Egg to Sea Turtle by Lisa Owings. After that we did two scarf songs, "We Wave Our Scarves Together" and "Popcorn". I talked a little about the kinds of aquatic turtles we have in our area that live in ponds, creeks, and rivers in order to segue to our second book, Turtle Splash! by Cathryn Falwell. This is a nice book because it incorporates counting down, as well as showing several different forest animals. We ended with bubbles.

For the after storytime activity, I still had the waterbeads from the week before (I had rinsed and stored in the fridge) and this time instead of sharks I added plastic sea turtles. I also put out some turtle coloring sheets and dot-painting sheets in case someone really wanted to do a craft, and a couple did those as well.

Again we started with our usual hello song, and then did "Slippery Fish" for a warm-up. Then I talked about aquatic reptiles for a little bit, and showed the life cycle of a sea turtle using From Egg to Sea Turtle by Lisa Owings again. After a lead-in song I preceded reading The Box Turtle by Vanessa Roeder with a brief discussion of how some turtles live in the sea, but some live in freshwater and some live on land, like the one in this story (I had a really hard time finding good turtle stories for storytime, and none of them were about sea turtles). I followed that with the classic "Snapping Turtle" rhyme, then discussed some of the other aquatic reptiles like alligators, crocodiles, and snakes, then read the non-fiction book Sea Snakes by Lindsay Shaffer. After that we sang "I Wish I Was a Silly, Slippery Snake", then moved to the activities.

I gave them a choice of playing in the sensory bin with the waterbeads and turtles, or making a turtle craft. I printed out flippers and head on green cardstock, then they could make the shell with either a paper plate or bowl, depending on how high they wanted the shell to be. To make the scutes of the shell, I provided circles cut out of green patterned papers leftover from the mermaid tail craft earlier in the summer. Surprisingly, this time they all wanted to do the craft first, then played in the water beads.

I started with our usual book discussion, and for the first time all summer, no one wanted to share. I didn't have as many to booktalk, either, because so many of the reptile books were already checked out, and I didn't have any new books this week, either. So I booktalked the classic Nim's Island  by Wendy Orr and the one decent non-fiction book we had left, Sea Turtles by Laura Marsh..

Then I had a brief slide show so they could see the different kinds of aquatic reptiles. Since our theme all summer has been "Oceans of Possibilities" I started with reptiles that live in the ocean, and showed them pictures of the different types of sea turtles, sea snakes, marine iguanas, and salt-water crocodiles. Then I moved on to the types of aquatic reptiles that we might see here, which are several types of pond turtles, including alligator snapping turtles, and water snakes (we have two, only one of which is venomous).

Then we had two crafts, one was making a baby turtle by weaving yarn around three mini-craft sticks that were glued together in the centers, kind of like a snowflake. I provided multiple colors of yarn, and they could use one or more colors, and markers to color the feet, tail, and head and add facial details. The second was making a beaded snake by one of two methods. The easier way was to just string bead on a piece of pipe cleaner, and fold the ends back around on itself to secure the beads and make the head. The other method strung the beads on string, cording, or wire (I used cording), and was a little more complex (It's actually easy once you get going, but initially looks intimidating. I did try to demonstrate and explain how to do it, but also showed the video that I learned it from which makes it more clear.

It went pretty well, though I did overhear one of the caregivers (who is always kinda grumpy anyway) grumbling because I did provide written step-by-step instructions. I often do, but sometimes just have not had time, and I've also noticed that here people generally don't read them or take them home and it just seems like a lot of wasted time and paper. I felt like both crafts were pretty easy, and that the video for the beaded snake was more helpful than written instructions would have ever been. No one else seemed to have any issues, and caught on pretty quickly. I told them they could make more than one if they wanted, as long as the materials I had put out lasted, so some make both kinds of snakes and some made 2 or 3 turtles. A couple got creative, one making just the head of the snake and wearing it as a necklace, the other turning their snake into a bracelet.

For our last family program I booked the local reptile zoo, knowing animals is always a sure draw. Since their price was lower than most and they gave a big discount for a second show at the same location, I went ahead and booked them for two shows, one at 11am and one at 1pm. I figured that way we could accommodate more people, and if the crowds were smaller then everyone would be able to be up close.

The first show was pretty full, the second show only filled to just over half-capacity, but overall I felt we had a very good turnout for the last week. The presenter brought an albino corn snake, a boa constrictor, a tortoise, an alligator snapping turtle, a savannah monitor, and an alligator. People were really pleased with the show, and we got several positive comments on our Facebook post afterwards. Another nice thing was the presenter let staff come in between shows to see the animals up close, and even touch them if we wanted.

And with that, our summer programming is over!! Just in time, too; I was running out of steam, and I don't know that I could have gone one more week! I left a little early on Friday, and took a mental health day on Monday to recover, and we are taking a break from programming for the next three weeks. During that time the rest of the staff and I will go over everything and discuss what worked, what didn't, how we want to do things next year, clean and organize our offices, program room, and storage; start a big weeding and shifting project, then start planning for Fall.

I will write up a SRP reflection after I've had time to rest and reflect.