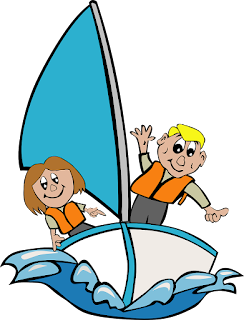 Last week was all about boats and buoyancy! Even though we are nowhere near the ocean, we still have plenty of lakes, rivers, and streams for boating.

I started off with our hello song, then for a warm-up did a rowboat version of the old "Little Red Wagon" song:

Then we sang our lead-in song, and went to our first book, Row, Row, Row Your Boat by Jane Cabrera, which we sang. The kids really liked all the different verses with all the animals. After that we went from rowboats to motorboats, rolling our arms fast and slow with this rhyme:

Then I read our second book, Boats on the Bay by Jeanne Walker Harvey and Grady McFerrin, which showed all different kinds of boats and ended with a parade of lights and fireworks over the bay, then finished with bubbles. The after-storytime activities were dot painting, with a choice of three different boat pictures, and playing in the sensory table which was filled with water, and had rubber ducks and boats.

I did the same beginning routine with this group, then read Gail Gibbons' Boat Book so they could see all different kinds of boats, followed by the motorboat action rhyme a couple of times. I had intended to read Bunny Overboard by Claudia Rueda next, but somehow I had a major brain fart and forgot and thought we were finished! I think because I read a book showing all the different kind of boats at the end the previous day, but did a similar one at the beginning to day, I confused myself. I didn't realize it until I was cleaning up, and I was so embarrassed!

A couple of other things threw me off my game today as well. First of all, one activity I had planned did not work, and we had to scramble to come up with something else. I had planned on doing sink or float and having them make cartesian divers, which are supposed to go up and down when you squeeze a closed water bottle. But mine only moved maybe a half-inch, which I knew would not even be a perceptible change to the kids. So while I did storytime, my co-worker quickly found and got things together for a cute sailboat craft. While they worked on the craft, I got things together for a "Sink or Float" experiment and let them make predictions and observe the results, and they also got to play in the sensory table. The other thing that threw me off was I had a very small group, despite having a good turnout previously. It was just an off day all around.

I had originally planned a much more elaborate "Boating School" program, including knot-tying, nautical terms, boating safety, a boat-building challenge and obstacle coarse, and writing "what I learned in boating school", and giving kids licenses. However, after all the drama last week, I just wasn't up to it and scaled it way back.

I started with the usual book-talking (I Survived the Sinking of the Titanic by Lauren Tarshis and Scott Dawson, White Star: A Dog on the Titanic by Marty Crisp, Titanic: Voices from the Disaster by Deborah Hopkinson, and Lifeboat 12 by Susan Hood), then I went over some very basic nautical terminology (bow, stern, port, starboard, parts of a sailboat) and water safety. Then I gave them a challenge: build a "boat" using only a 12"x12" square of aluminum foil that will hold at least 30 pennies.

But first, I did a sink or float demo to get them thinking in the right direction, letting them predict and observe. I let them see that if you put a clam shell in the water the right way, it will float due to water displacement, and that a ping-pong ball floats due to trapped air. Then I used a smaller 4"x4" square of foil to show it would float, partly by surface tension and partly due to the weight being evenly distributed over a wide area. Then I wadded up another sheet into a ball, and they saw that it floated due to small pockets of air being trapped inside. But then I carefully folded a third sheet in half, and in half again and again, until it was very small and compact, carefully smoothing out all the air as I did so. Much to the surprise of many of them, it sank.

Then I gave them all a their squares of foil, and told them to use what they had observed to guide them, and that while it could be a traditional boat shape, it could also be more like a raft, or whatever shape they wanted. I also told them they could try as many different designs as they wanted, but one at a time. At first many of them seemed confused and weren't sure what to do, but once others got going and started testing their boats in the water, the rest soon followed. Some were happy to just do it once, others really got into it with multiple designs.

In addition, I had two pre-packaged crafts from Oriental Trading I had purchased just in case I needed something extra in a pinch, so I used them for this. They didn't have anything to do with boating or buoyancy, but they were ocean related. Once was making a little "coral reef" with a craft foam base, pipe cleaners, and foam fish stickers, and the other was a paper-weaving with four ocean creatures to choose from.

In the end it went really well, and I was very glad I had scaled back rather than attempt the bigger program I had first envisioned but really wasn't up to doing.

Since the family movie days weren't really drawing anyone, and I had built up a big pile of leftover crafts and prepped materials, I decided to do a drop-in "Family Crafternoon" instead of a movie this week. I had hoped this would be a low-effort program that would used up leftover materials to prevent waste or taking up space, as well as provide a true family program since I keep having issues with some coming to the elementary program expecting all of their kids to participate, even those too young. I put out leftover sand art kits, dot markers and templates; sparkly pipe-cleaners, pearl beads, and cowrie shells leftover from mermaid crowns; various paper crafts, and some general craft supplies for a 2-hour time frame so families could drop in and do their own thing. I did show the examples from the original crafts the materials were intended for, but encouraged them to do their own thing.

I did have a few families come, but not as many as I'd hoped, and not the ones who keep asking for family, all-age programs. I don't know if it's the day of the week it's on or what, but for whatever reason people keep coming to the elementary program, that clearly specifies it is only for ages 6-10 due to demand and safety, and expecting it to accommodate the younger siblings as well. But one sweet little girl gave me a bracelet she made out of a pipe cleaner and cowrie shells, and it made my day 🥰.

I had already had the idea of using paper circuits to create a picture of a deep-sea anglerfish with a lure that lit up, and then lucked into finding a template online from HP. The original printable was intended to make a small greeting card, and I had to scan it to a jpeg and manipulate it a bit to make it larger, and adapt to work with the little LED stickers rather than a regular LED bulb. Then once the kids had finished the anglerfish and kind of had the hang of how the paper circuits worked, they all designed their own original art, and figured out how to lay out the circuit in order to illuminate their art the way they wanted.

We had a small group of four, but they were all really great kids and fun to work with. They all really enjoyed being able to create and light up their own art. It's been so long since I've worked with older kids, I'd forgotten what a nice change it can be getting to do something a little more sophisticated with a smaller group, and no parents. This was probably one of the most enjoyable programs of the summer for me personally.

Other than my flub with the preschool/kindergarten storytime, it was a really good week. Only two more weeks to go!