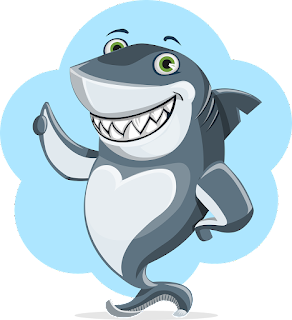 I've been doing "Shark Week" with my storytimes for several years now, since long before it was cool and everyone was doing it. I also was using "Baby Shark" before the PinkFong version went viral (my son hates the song and blamed me for it going viral, LOL, as if I were some big influencer 🤣). I'm not even really that into sharks, but I used to like Shark Week on the Discovery Channel, back when it was more educational than sensational, and I found it to be a really fun theme to do, plus a way for the younger kids to get into the Shark Week frenzy (see what I did there?) in an age-appropriate way. I was originally supposed to do a whole big Shark Week program during the summer of 2020, but you know what happened to that. So I incorporated elements of what I had planned for that into my programs this year.
Toddler Time (ages 1-3)
We sang our "Hello" song and then did "Baby Shark" as our warm-up. We talked about sharks for a bit, and then sang our "Are You Ready for a Story" to lead in to our book. Since this book was a little on the longer side, it was the only book I planned on reading for the day. The Little Fish Who Cried Shark! by Trish Phillips is a really fun book to read aloud as it has great rhythm and rhyming text, plus it is a pop-up book! It is a fun re-telling of the classic folktale, The Boy Who Cried Wolf, and of course the brightly colored pop-up illustrations are very engaging.
After that I used my shark hand-puppet and five little fish finger-puppets to do "Five Little Fishies Swimming In The Sea", where they tease Mr. Shark that he can't catch them, and he then sneaks up quietly and chomps them one by one. This is great fun, and the kids love it. I followed that by showing a few pictures of different sharks and the different kinds of shark teeth from a non-fiction book Face to Face: Sharks by Scholastic, and letting them rub shark shapes I had cut from sandpaper and glued to blue card stock to simulate what shark skin feels like. That was followed by singing "Slippery Fish", a fun song that goes up the food chain with a fish being eaten by an octopus, who is eaten by a tuna fish, who is eaten by a great white shark, who is finally eaten by an orca whale (who is really not a whale, but a very large dolphin).

For our activities I created a shark-filled ocean in our sensory bin with water beads (a whole 7 or 8 oz bag, plus about 1/4 cup of another and 7 gallons of water) and plastic ocean creatures (mostly sharks, but a few others). Then I set up a gross motor activity - 'walking the plank' over shark-filled waters. I bought a piece of wood, maybe 5 feet long and 6 inches wide (a little longer would be better, but wouldn't fit in my tiny car), then a smaller piece I cut into short pieces to support the long plank, and nailed them together. [I would also advise attaching some kind of non-skid material if you'll be on a hard surface.] Then I cut shark fins out of cardstock and taped them down to the floor. They LOVED the waterbeads, and it was hard to get them to do anything else.

Early Explorers (ages 3-6)
I did an expanded version of the toddler program, and changed the order slightly. With this group, I did "Slippery Fish" as the warm-up and saved "Baby Shark" until the end. I shared some of the pictures from the non-fiction book in the intro, and told them all 3 shark stories we were going to read were based on classic folktales, and to pay attention and see if they could recognize which ones.

I read The Three Little Fish and the Big, Bad Shark by Ken Geist and Julia Gorton, an old favorite obviously based on the story of The Three Little Pigs; The Little Fish Who Cried Shark! by Trish Phillips, a re-telling of The Boy Who Cried Wolf; and I was finally able to complete a trifecta of shark stories that are re-tellings of classic folktales with a new book, Sharky McShark by Allison McMurray. This is the only one whose title doesn't give away what folktale it's based on, which is The Lion and the Mouse. Not surprisingly, the kids didn't really recognize the sources for each story, but most of the adults did. Once it was pointed out, the kids recognized that The Three Little Fish was a re-telling of The Three Little Pigs, but they clearly weren't familiar with The Boy Who Cried Wolf or The Lion and the Mouse.
I also did the "Five Little Fishies" with the puppets for them in between stories, and we ended with "Baby Shark" and then moved on to the activities: walking the plank, playing in the sensory bin, and/or a craft gluing torn tissue paper in shades of blue, teal, and white to create an ocean background, and adding shark silhouettes. As expected, the sensory bin was by far the biggest attraction, and only the parents were interested in the craft and had a really hard time getting the kids to do it, and most just glued a few random pieces of tissue paper down, stuck on the sharks, and ran back to the sensory bin. Which is fine and expected; I just wanted them to have options and make it a little bit more special than a typical storytime program.

Elementary Explorers (ages 6-10)
I started off with letting those who wanted to share about something they had read or were reading. Then I booktalked a few shark books, both fiction and non-fiction (most of our shark books were checked out, so I didn't have much to choose from!): I Survived: The Shark Attacks of 1916 by Lauren Tarshis and Scott Dawson, I Survived, True Stories: Nature Attacks by Lauren Tarshis, and Soul Surfer, an autobiography by surfer and shark attack survivor Bethany Hamilton.

Then I showed two short videos (14 minutes total) so the kids could learn some basic shark facts, and then showed slides of some unusual sharks: whale (biggest), lantern (smallest), goblin, sawshark (as opposed to sawfish, which is a ray), hammerhead, frilled, wobbegong, and cookie-cutter. In one of the videos we learned how sharks are always shedding and replacing teeth throughout their lifetime, shedding hundreds or thousands of teeth, which end up at the bottom of the ocean, sometimes washing up on the beach where people could find them.
This segued nicely to our main activity, which was to first hunt for sharks teeth in our simulated "beach" (sensory bin filled with sand and 40 buried shark teeth). They were asked to take turns going in groups, and once they found one to please take a seat. Then we passed out bowls of wooden beads in natural and colored finishes to each table, and a length of waxed braided cotton cording to each participant, and they made beaded necklaces with their shark teeth [many, many thanks to another staff member who makes jewelry for wire-wrapping all the teeth after we realized it would be way too difficult for this age to do themselves; you can buy them pre-wrapped, but they are pretty pricey].

I had taped one end of each cord to make string beads easier, but a lot of the kids had trouble with the concept of stringing only from one end and having to put beads on first, then the tooth, then more beads. They wanted to put the tooth on first, add beads to one side, then got frustrated trying to add beads from the other side. Next time, I will downsize on the cord so it will be easier; I had wanted to go with the thicker one so they would be sturdier. Some kids just added a couple beads to each side, some added several, and one girl had beads almost all the way around in a carefully planned pattern, while others just strung them randomly. They really seemed to like having a real shark tooth.

Because I wasn't sure how long it would take, and wanted to have more things just to make it a bigger deal, I also had printed out sheets to make shark fortune tellers (or cootie-catchers, if you prefer), shark magnet kits from Oriental Trading, and a framed writing prompt from OT (that no one did there, and only a few took home).
Family Movie Double-Feature
I haven't had much success with movies, but I thought I'd give it one last go. I had originally planned on showing "Finding Nemo", but when the "Bad Guys" movie came out on DVD a couple of weeks before, I grabbed it and decided to add it as a double-feature. I'd hoped that having a new release of a popular movie based on a popular book series would be a bigger draw. I also advertised more, put up flyers, and advertised that snacks would be provided. Then, we got the newest book of the series in two days before, so I added that we would draw names of those attending the movie to see who got to check out the newest book first, and advertised that.

Unfortunately, we still did not have a good turnout. No one came for "Finding Nemo", but the kids from a family that just happened to come to the library did go in and watch for a while, but not the whole thing, and a family that came for "Bad Guys" got there early enough to catch at least the last half of Nemo. I only had a total of three families, nine people, that came for "Bad Guys". However, two of the boys that were there were REALLY excited to see the movie and for the chance to be the first one to read the newest book, so that was nice.

So, I guess I am done with trying movie days. If a popular new release, free snacks, and the chance to get the newest book first were not enough to draw more than nine people, nothing will. I really wish it would, because it is a very easy, no-cost way to add family programs that don't require staff time, but with all the digital access now, no one cares about free movies at the library anymore.
Teen Programming
My co-worker had her usually weekly writing club with a handful of kids attending, and then had the last teen program of the summer, decorating cupcakes and watching "Sharknado". Again, only a handful of kids showed up, despite heavy advertising and free cupcakes. I fear our community is just too small to get the critical mass needed for a truly successful teen program.
And now we are *almost* at the end! Just one more week to go! I am so ready for a break. Next year I hope I can have things more planned out ahead of time, and can hopefully delegate more so it won't be quite so hectic and stressful.
Posted by Jen at 10:27:00 PM