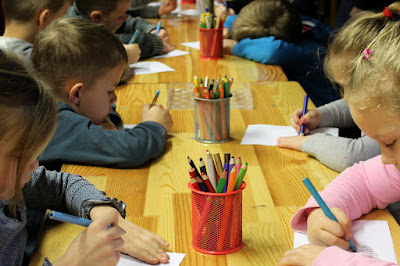 In my last post I reflected on the reading challenge portion of our summer program, and in this one I'll focus on the programming. Overall, the programming part went well; programs were well-attended and we received a lot of positive comments.

The way I organized summer reading and programming was very different from what my predecessor had done, but more in line with what most libraries seem to do.

I felt like people needed something for the whole summer, and a little less intense. I also felt that is important to continue storytime in the summer, as well as have more age-specific programming. I'd been told by several people that the person before me didn't really program for the older kids, just the younger ones, and the teen person programs for middle school and high school ages, so elementary kids just got left out. So I wanted to be sure to have programs just for them in the summer.

I planned on a weekly rotation, with everything in the morning in case we had to be outside due to Covid. I felt having things on the same day and time each week would make it easier for caregivers to remember. I kept Monday's free for planning and prep, then had toddler storytime on Tuesday, preschool storytime on Wednesday, Thursdays were paid performers or movie days (to give me extra prep time for the elementary programs), and Fridays were for elementary programs. My co-worker had teen programs in the afternoons or on Saturdays, but not necessarily every week.I also required registration, because I had limited supplies for some programs, and we didn't want people to be too crowded together due to Covid.

We did follow the CLSP theme of "Oceans of Possibilities" and most of our programs tied in with that theme. I also ended up having loose weekly sub-themes. It was a super easy theme to decorate and program around. We also started with a kick-off party, with a variety of games, crafts, and costumed characters, as well as a caricature artist.

In general, everything went well. The kick-off was hugely successful, we got a lot of positive feedback about our programs, and programs were well attended. The elementary age-group programs were particularly popular and well-attended, though we did have trouble with a few people who couldn't understand the concept of age-specific programming and came in just assuming it was for all ages, even though it was clearly labeled and marketed as being for ages 6-10 and there were other programs for toddlers, preschoolers, and families.

While I will probably do things very similar next year, there are some things I've learned that will impact next summer's programming:

I think the biggest change for next year is trying to fit in more all-ages family programs, and moving away from registration. I definitely want a few more teen programs as well. I'm not sure about having all the kids stuff in the mornings. I liked it, and at least one patron commented that they like it, and while we got no negative comments, I can't help but wonder if some families missed out because there was nothing in the afternoon, evenings, or weekends.
How did your summer programming go? What worked and what didn't? What will you do differently next year?
Posted by Jen at 10:56:00 AM