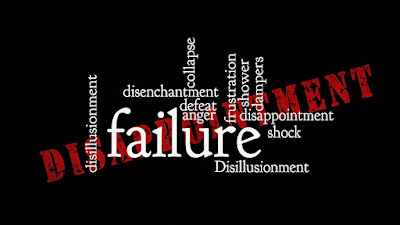 It's something every programmer dreads, putting time and effort into what we think is a good program, and nobody shows up. But it's probably happened to all of us at least once, and it doesn't feel good. Though the word cloud above may be a bit harsh, it is definitely how I felt at the time when it happened to me. Like having no one show up to your birthday party, it's hard not to take it personally. And let's face it, as much as we say numbers aren't everything, we aren't naïve; we know numbers are how we are often judged.

I think we are all familiar with the anxiety around attendance that precedes every program. How many should I prepare for? What if too many people show up? What if no one shows up? I have had both happen, and though having more people show up that expected can be very stressful, I think having way less than expected is worse.

I've only once had no one show up for a program, but it was for a storytime that only had 2 regular families, and a couple more occasional families. I had just added this second storytime a couple of months before, and it hadn't been well attended. I wasn't too upset about it, except that it was my last week at this library, and I hated not having a chance to say good-bye.

However, I recently had a program that I expected to get a large attendance for, say at least 20 kids, and only had 5. I had planned a program around the release of Mo Willems' new Pigeon book, The Pigeon Will Ride the Roller Coaster!, thinking a popular character of a series spanning almost 20 years would attract quite a few families. I scheduled it for a Saturday morning, thinking it would appeal to both preschoolers and younger elementary-aged kids. I had a number of activities planned that were loosely inspired by the Pigeon and other Mo Willems characters; some were borrowed, but some were my own. Since I had no idea what to expect as far as attendance, I asked both YS staffers to come in on Saturday to help.

[In case you're curious, here is a list of planned activities and the books/characters that inspired them:

And yes, I totally over-planned with way too many activities, but I was trying to (1) cover a range of ages (3-8), and (2) have enough stations to spread everyone out if I got a big crowd (which is laughable in hindsight).]
So, I had everything set up, had printed out large characters on our plotter to put on the walls, made really cute signage for all the activities, and at start time I had ONE child (there had been another family with two young children, but they arrived at least 30 minutes early, and the kids had gotten too fussy by the time the program started and they left). Luckily a few more trickled in, but I still ended up with a total of only five kids. Now, those five were very excited to be there and had a great time, so I would not say it was a waste of time.
However, if I had known I was going to have such a small crowd I would cut way down on how many activities I had, I would have given away a paperback copy rather than a hardback copy, and I would not have had my staff come in. I felt really bad about having them come in on a weekend when it turned out to be completely unnecessary. I also felt bad for how much paper and ink I had used for all the decorating, signage, and activities. And I felt pretty foolish for having so misjudged the attendance and over-doing the whole thing.
So, what do you do when this happens? First, try not to beat yourself up. The public can be very fickle, especially now, and it can be so hard to predict what they will show up for, and what good days and times are. I had even conducted a survey to try to figure out what people wanted and when, and though I didn't get as many responses as I would have liked, the ones I got indicated this program would have been more successful. Do try to learn from it, see if you can figure out what might have gone wrong. Was there a competing community event? Was it not promoted well? Was there bad weather that would make people stay home, or exceptionally nice weather that would make people want to do something outdoors? Was it just not the right activity for that age group? Maybe a different day or time? Sometimes you really never know, and someone else could so a similar program another time or at another location and get a huge turnout.
So where did I go wrong? Honestly, I'm not completely sure, and can only guess. I promoted the program heavily on our social media, with posters and flyers in the library, on our TV screen in the entry way, in storytimes, and to any patrons that happened to come in with kids of the right age. There was a festival going on that weekend, but since our building is literally right next to the area blocked off for the festival, we thought that would help rather than hurt, thinking families would park at the library, come in for the program, and then walk next door to the festival. But it didn't work out that way. Also, I knew sports are a big thing here on Saturdays, but I did not realize how early they start these days. I thought age 5 was a little early when my kids started, but now organized sports are apparently starting at age 3! This community also seems stuck in the mentality of thinking library programs are just for the summer.
And finally, I just have to learn to manage my expectations, and forget everything I knew from pre-pandemic days at my old library that was larger, much busier, and in a very population-dense are with a community that had a much stronger reading/library culture. Those days are gone, and I am starting from scratch, post-pandemic, in a different community. I need to let go of the past and figure out what the new normal is, and accept it's going to be a lot of trial and error and time to get there. I am going to keep programs very simple until I start getting better attendance, and I will probably not be doing a Saturday program again any time soon.
So, that's all a very long-winded way of saying: don't beat yourself up, it happens to everyone, celebrate the small victories, learn what you can from it, recycle/reuse what you can, and move on!
Anyone else care to share about a program that flopped?
Posted by Jen at 12:43:00 PM